HTC is rolling our four new Desire smartphones in the US, hoping to attract customers with colorful options and affordable prices.

Struggling smartphone manufacturer HTC is launching four new handsets from its Desire family in the US. All of the new phones boast 4G LTE connectivity and are available in a wide range of colors.

HTC officially announced the four new Desire phones in a July 15 blog post. The company, which is looking to regain some traction against Samsung and Apple, is looking to appeal to money-conscious US consumers after focusing most of its efforts this year on its high-end One M9 smartphone.

However, HTC is trying to offer as many features as possible into its cheaper smartphone line.

The Desire line comes with an 8-megapixel primary camera and video captured by HD 720p video recording capabilities, with the Desire 626 adding a 5-megapixel front-facing camera.

The Desire 626s, Desire 526, and Desire 520 all come with a lower-resolution 2-megapixel front-facing camera. 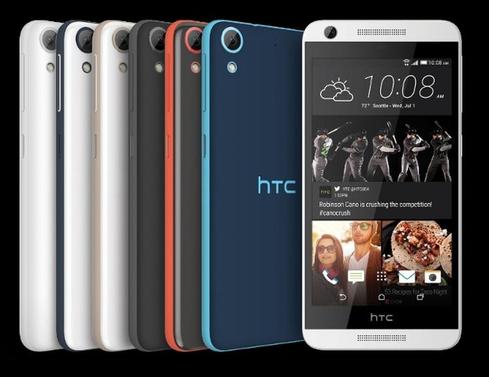 Despite the wide range of colors available overall, the company noted each provider would confirm the colors and models it is carrying, beginning this week and continuing through the coming months.

Each model runs a quad-core processor and Google's Android operating system with HTC's own Sense interface layered on top, a 2000 mAh battery and expandable memory.

The smartphones also come with Sense Home, a widget that automatically curates apps based on usage and location, and is contextually aware of location, time of day, and preferred apps at home, work, or on the move.

For example, while exploring a new city, BlinkFeed -- one of the first attempts by an Android manufacturer to introduce a news and social reader feature directly into the default home screen launcher -- will automatically recommend restaurants nearby.

The One Gallery feature syncs with Facebook, Flickr, Google Drive, and Dropbox accounts and brings photos together in a single location to make searching for files easier.

Rounding out the OS is Themes, which allows users to pull color and textural elements from a favorite photo to modify the look of apps, the color scheme, and the home screen.

Themes also provides an opportunity to create and share a theme with the HTC community, or just browse and download one created by other HTC users.

Despite generally favorable reviews and high-quality build materials, HTC has struggled to stand out in a crowded smartphone market.

The company saw its stock take a 10% dip after it reduced its second quarter revenue outlook by nearly a third, blaming softer-than-expected demand from China.

In June, Asus caused a minor stir after a company executive floated the idea of purchasing HTC, to which the company fired back a testy reply stating in no uncertain terms that the company would not consider an acquisition.

Nathan Eddy is a freelance writer for InformationWeek. He has written for Popular Mechanics, Sales & Marketing Management Magazine, FierceMarkets, and CRN, among others. In 2012 he made his first documentary film, The Absent Column. He currently lives in Berlin. View Full Bio
We welcome your comments on this topic on our social media channels, or [contact us directly] with questions about the site.
Comment  |
Email This  |
Print  |
RSS
More Insights
Webcasts
Protecting Your Enterprise's Intellectual Property
Building the SOC of the Future: Next-Generation Security Operations
More Webcasts
White Papers
A Technical Deep Dive on Software Exploits
MPLS, SD-WAN and SASE
More White Papers
Reports
The State of Threat Detection and Response
DNS Network Traffic Volumes During the 2020 Pandemic
More Reports

<The smartphones also come with Sense Home, a widget that automatically curates apps based on usage and location, and is contextually aware of location, time of day, and preferred apps at home, work, or on the move>

Can users opt out of that? One person's convenience is another person's Big Brother.
Reply  |  Post Message  |  Messages List  |  Start a Board
Editors' Choice
Hot Topics