The 7,200 RPM Ultrastar 7K3000 has a claimed enterprise-class mean time between failure of 2 million hours. 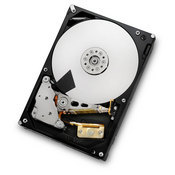 Hitachi has introduced what it says is the first 3TB hard drive with the performance and reliability needed for use in the data center.

The company launched the Ultrastar 7K3000 Tuesday. What makes the new product ready for business-critical servers and data storage is a speed of 7,200 RPM and, most importantly, a mean time between failure of 2 million hours, which is backed by a five-year warranty.

The 3.5-inch 7K3000 is the fifth generation of Hitachi's five-platter mechanical design, which has been used for three years in other Hitachi hard drives found in servers and storage hardware. The new drive has an annualized failure rate of four-tenths of a percent, which is 40% less than drives rated at 1.2 million MTBF. Hitachi says the drive's reliability makes it useful for cloud storage, massive scale out data farms, data warehousing, disk-to-disk backup, and RAID arrays.

Hitachi is touting the drive's long life and high storage capacity as key contributors to lower total cost of ownership. The 7K3000 delivers 50% more capacity in the same footprint as the prior generation Ultrastar A7K2000, while delivering a 32% reduction in watts per gigabyte.

Hitachi also provided a comparison with its new drive and a 2.5-inch, 7,200 RPM enterprise-class drive. A total of three drives of the latter would be needed to reach 3TB, which would consume up to 170% more watts and occupy three times the storage array slots. Therefore, the 7K3000 is an option for consolidating storage and cutting power consumption, the company says.

The 7K3000 is available in both 6Gb per second SATA and 6 Gb/s SAS interfaces for integration into legacy and new storage environments. The drive is also available with bulk data encryption options.

The Ultrastar 7K3000 is also available with 2TB of storage. The drives are available with a SATA interface worldwide. The SAS models are scheduled to be available in mid-2011. Pricing was not disclosed.

Hitachi's rival Western Digital also makes a 3TB internal hard drive. However the Caviar Green has half the data transfer rate and a much lower MTBF.

Hitachi Takes A Swing At Cisco

We welcome your comments on this topic on our social media channels, or [contact us directly] with questions about the site.
Comment  |
Email This  |
Print  |
RSS
More Insights
Webcasts
The Failures of Static DLP and How to Protect Against Tomorrow's Email Breaches
How Elite Analyst Teams are Transforming Security with Cyber Reconnaissance
More Webcasts
White Papers
The Dark Side of SD-WAN
The Trouble with Phishing
More White Papers
Reports
Building an Effective Cybersecurity Incident Response Team
Special Report: Understanding Your Cyber Attackers
More Reports