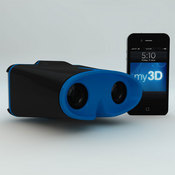 Toy company Hasbro will debut a handheld device called My3D that will enable three-dimensional views when attached to the Apple iPod Touch and iPhone, according to the Associated Press.

The accessory, which resembles a pair of binoculars, is geared at both children and adults who want a 3D, 360-degree experience when playing games and viewing content. It is being launched at an investor meeting that the country's second-largest toy maker is holding on Tuesday, the AP reported. My3D is not due out until next spring and will retail for $30. It will be available in stores that sell the iPhone and iPod Touch.

Consumers can browse and purchase content for My3D at Apple's App Store. Some of the apps will be free, the AP said. Hasbro reportedly had assistance from Apple during development of the device, the AP said.

Over 125 million iPod Touches and iPhones have shipped, a figure that will rise to 200 million by the end of 2011, analysts predict, who also note that the My3D device may hold appeal if enough compatible content is made available.

Hasbro reportedly partnered with Dreamworks Animation to develop material, and is also planning to use content from a 3D television network set to debut next year from Discovery, Sony, and Imax. My3D users will be able to watch clips for up to 20 minutes of trailers and behind-the-scenes footage, the AP said. Hasbro will also use the My3D device to market its own brands, although it did not provide details, the AP reported.

The toy maker has also worked with the Los Angeles Convention and Visitors Bureau to develop virtual travel visits to the Wax Museum and the Santa Monica Pier so users can experience the feeling of being immersed in deep water and explore sea life while they learn about it, the AP reported.

We welcome your comments on this topic on our social media channels, or [contact us directly] with questions about the site.
Comment  |
Email This  |
Print  |
RSS
More Insights
Webcasts
Why Performance Testing is More Critical Today
5 Ways to Jumpstart AI
More Webcasts
White Papers
Getting The Right Cloud Management
What is NDaaS?
More White Papers
Reports
An Insider's View into a Supply Chain Attack
The Definitive Guide to Managed Detection and Response (MDR)
More Reports