The first Google-made Android tablet lets you leave your laptop at home, though you may still miss it. 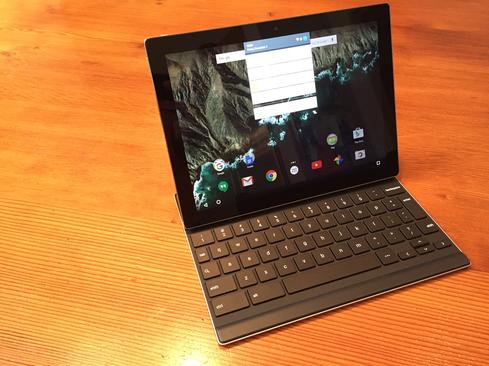 Google's Pixel C, which launched Dec. 8, is the first tablet designed by Google. The company's Nexus devices, which likewise aim to be exemplary, are made by its Android hardware partners.

The Pixel C is not, like previous Pixel models, a Chromebook. It runs Android 6.0 Marshmallow, and it attempts to be both a tablet and a notebook.

In keeping with the standards set by its antecedents, the Pixel C is a device of quality. The Pixel product line, as Google CEO Sundar Pichai has described it, is intended to be "aspirational." It can also be described as transitional -- it shows the technology industry trying to reconcile desktop computing with mobile computing. In this, it's only partially successful.

Made of anodized aluminum and visually appealing, the Pixel C feels expensive. But it's in line with the competition, as least with regard to pricing. Starting at $499 for the 32GB model, it compares favorably to Apple's iPad Air 2, which starts at the same price but offers only 16GB of storage. Microsoft's Surface 3 also starts at $499 but comes with 64GB of storage.

[ The struggle is real. Read 8 Reasons IT Pros Hate The Cloud. ]

The "C" stands for "convertible." The Pixel C is designed to be accompanied by a keyboard, which costs $149 and converts the device from one suited to touch apps and media consumption to rapid typing and data entry. The wireless keyboard is full-size, if you don't mind reduced shift keys, and it performs well. It attaches and charges magnetically, and the hinge that holds it does so with conviction. When the screen and keyboard are connected, you can pick the device up and shake it gently and the screen will stay firmly in place. Nothing feels flimsy.

Yet, as much as a fast processor and capable networking make apps fly, performance isn't really the most salient issue with the Pixel C. If you've never used a laptop and you intend the Pixel C to be your primary computing device, you could be very happy with it. But if you have spent years using desktop and laptop computers, shifting over to an Android tablet requires new work habits.

Almost a decade ago, Google pitched search to businesses as an "über-command-line interface to the world." The Pixel C offers something of the sort, in the form of the Google Search input box that appears at the top of the screen. If you start typing, the device interprets the text as a query. The Search box gets focus by default, as if search should be where computing starts, rather than with local data. Google assumes you're seeking to interact with the cloud. On an OS X device, typing in the Finder assumes local interest, and shifts focus to the file, folder, alias, or device with the name nearest to the input. It's a small difference, but it says a lot about the underlying design philosophy.

Those who have grown up with cloud computing may find this perfectly comfortable. And if you're looking for a device to interact with Google Apps, the Pixel C makes a great window into the cloud. But developers and those used to dealing with traditional notebooks may not want to make the effort to adapt. Despite all the things you can do with an Android tablet, there are things you can't do such as run Android Studio to make Android apps. You need a computer running Linux, OS X, or Windows to do that. Until that changes, tablets won't satisfy power users.

The Pixel C is well-suited to traveling and light productivity tasks. It's small enough to fit on an airplane tray tablet, masochistic though it may be to attempt to work when packed like cattle in coach. But Chromebooks make better travel devices because they're fundamentally more secure. Chromebooks can also run some Android apps.

If you're determined to travel with an Android device, the Pixel C should prove more productive than a tablet without a keyboard. But it's something less than a traditional laptop, if that sort of thing matters to you.

Now take a tour of the Pixel C to see if it might be right for you. Once you've checked out all the features, tell us what you think in the comments section below.