The latest self-driving car prototypes from Google will roll on public roads in Mountain View, Calif., later this summer.

Meet Your IT Workers Of The Future
(Click image for larger view and slideshow.)

After reassuring the public that its self-driving cars haven't caused any crashes, on Friday Google said it intends to let its latest self-driving car prototype traverse public roads in Mountain View, Calif., where the company has its headquarters.

Google employees have driven the company's fleet of 24 modified Lexus RX450h SUVs on public roads for several years. Now Google intends to take the smaller prototype model that it introduced last year, the model designed to operate without a steering wheel, into the wild.

However, during these low-speed tests, there will be a steering wheel.

"Each prototype's speed is capped at a neighborhood-friendly 25 mph, and during this next phase of our project we'll have safety drivers aboard with a removable steering wheel, accelerator pedal, and brake pedal that allow them to take over driving if needed," explained Chris Urmson, director of Google's self-driving car project, in a blog post. 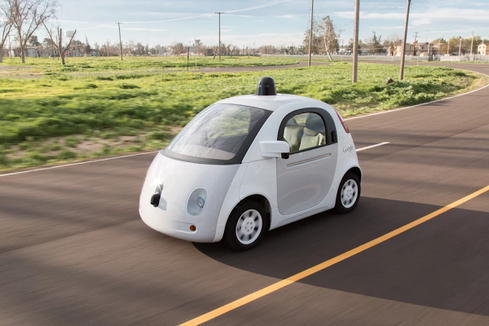 Google's latest cars also include a foam front-end and a flexible windscreen to mitigate any unavoidable impact.

Through testing, Google hopes to refine its autonomous driving software so it can handle unusual situations and road conditions, such as an obstruction that prevents the vehicle from reaching its programmed destination. The company also hopes to understand how people interact with its vehicles, which remain quite a novelty.

Google's self-driving cars have been involved 11 minor accidents over the past six years, Urmson said recently. According to the company, its cars have not been at fault. Rather, they've been hit by other drivers.

If accurate -- and police reports for these incidents, if any, have not been made public -- this underscores data from the National Highway Transportation Safety Administration that 94% of vehicle accidents are caused by human error. It also supports one of the major rationales for developing self-driving cars: making roads safer by reducing the number of accident-prone (and often inebriated) human drivers.

[ Who are you going to believe? Google Automated Car Accidents: Not Our Fault. ]

In addition to safety, self-driving cars can provide a new mobility option for the elderly and disabled. They may also help reduce traffic congestion and free up space in crowded urban areas by serving as alternatives to private car ownership.

While private cars won't disappear -- beyond their aesthetic and emotional appeal, they remain a necessity in many areas of the US -- car companies like Ford are already seriously considering the nature of their business opportunities in densely populated cities where car ownership has become impractical and, for many, too expensive.

For businesses, autonomous vehicle technology is seen as a potential way to reduce costs. Daimler Trucks North America received a license from Nevada earlier this month to test its autonomous (though not unmanned) Freightliner Inspiration Truck on public roads in the state. Freightliner sees autonomous vehicle technology as a tool to help its drivers and businesses through improved safety and more efficient fuel consumption, which also reduce the environmental impact of driving.

Thomas Claburn has been writing about business and technology since 1996, for publications such as New Architect, PC Computing, InformationWeek, Salon, Wired, and Ziff Davis Smart Business. Before that, he worked in film and television, having earned a not particularly useful ... View Full Bio
We welcome your comments on this topic on our social media channels, or [contact us directly] with questions about the site.
Comment  |
Email This  |
Print  |
RSS
More Insights
Webcasts
Take DevOps to the Next Level
Managing a Hybrid Cloud Infrastructure
More Webcasts
White Papers
2020 SANS Enterprise Cloud Incident Response Survey
Cybersecurity Report Card
More White Papers
Reports
Key Strategies for Managing New Risks in Cybersecurity
Protection Strategies for a Cyber-Resilient Organization
More Reports

I think it will take longer than Google or others think, at least to move beyond low-speed assistance for the elderly. If self-driving cars are appreciably slower than regular cars, the wealthy will opt to drive themselves (or a chauffeur), leaving the poor to accept less capable transportation.


Also, having seen how a robot tries to avoid people in a crowded room, I wonder how a group of automated cars will do when they arrive at an the same intersection. Is there a potential deadlock condition when they all get too close to move and lack the human initative to do something unorthodox, like drive up on the sidewalk, to break the logjam?
Reply  |  Post Message  |  Messages List  |  Start a Board
InformationWeek Is Getting an Upgrade!