On Wednesday Google announced the widely anticipated next generation of Nexus devices. The Nexus 6 is a big-screened smartphone made by Motorola, and the Nexus 9 is a tablet made by HTC. Both devices run Android Release L, which Google has finally given a name: Android 5.0 will henceforth be called Lollipop.

The defining feature of the Nexus 6 is its 6-inch quad HD display, the biggest ever on a Nexus smartphone. That's 2,560 x 1,440 pixels, if you're counting. The Motorola-made handset borrows design features from Motorola's own line of Moto X, G, and E smartphones, which means it has a curved back to more easily rest in the user's palm. It is made from an aluminum frame to give it a more premium look.

Google expects people to use the Nexus 6 to watch and share video, so the device includes stereo speakers with high-fidelity sound. The 3,200mAh battery is good for a full day of use, and the Nexus 6 supports Turbo Charge technology. Motorola claims just 15 minutes of charging time nets six hours of use. The camera has been improved to 13 megapixels, and it includes optical image stabilization and HDR+ for better low-light shots. Google didn't say much about the user-facing camera.

Google said the Nexus 6 will be available for pre-order through the Google Play Store in late October, starting at $649. There are two colors to choose from -- midnight blue or cloud white -- and it will come with either 32 GB or 64 GB of storage. Motorola and most major wireless network operators will begin selling the Nexus 6 in November.

The Nexus 9 is the first HTC-made Nexus device since the Nexus One, which debuted way back in 2009. (HTC hasn't made tablets for several years.) The Nexus 9 has an 8.9-inch screen, which slots it right between last year's Nexus 7 and Nexus 10 tablets, and boasts 2,048 x 1,536 pixels, making it a good competitor to Apple's iPads. 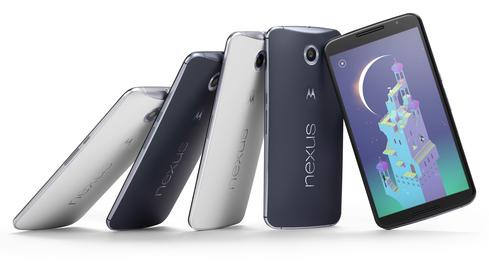 The WiFi-only model is powered by a Tegra K1 64-bit chip with two cores clocked at 2.3 GHz each; the LTE version jumps to a Qualcomm Snapdragon processor. Both versions include 2 GB of RAM.

The Nexus 9 will be available for pre-order October 17 and hits stores November 3. The 32-GB WiFi model will cost $399; there's no word yet on pricing for the other models.

In addition to the smartphone and tablet, Google also announced the Nexus Player, a TV accessory that promises to make it easier to push content between Android devices and TV sets. Made by Asus, the Nexus Player is a streaming media player for movies, music, and videos that runs Google's new Android TV platform. Calling the Nexus Player a "first-of-its-kind Android gaming device," Google claims users can play their smartphone or tablet-based games on their HDTV instead. The Nexus Player will be available for pre-order October 17 and reaches stores November 3. It will cost $99.

Since it has not been too long since Samsung's S5 was released, I wonder if consumers that own an S5 would consider upgrading to Nexus 6. It is also interesting to ponder whether Samsung closely monitors the performance of Nexus smart phones because these devices can provide valuable data and consumer requirements for upcoming devices, such as, the S6 (or the name of the device that comes after S5).
Reply  |  Post Message  |  Messages List  |  Start a Board

I dont see that as a problem with fragmentation. I see that as keeping companies working toward the competitive edge. In the handheld race... if youre not first... youre last.

I still think HTC makes solid phones. In fact I have went back to an HTC every time ive tried a new phone. Including Apple.
Reply  |  Post Message  |  Messages List  |  Start a Board

Interesting that the Nexus 9 is the first tablet by HTC in many years. Not too long ago, HTC was doing really well in the smartphone space, and then the competition came in and took all of that away. Now, its back to tablets. I suppose this is Google rotating tablet devices, but one would think it would choose a solid manufacturer to do every flagship tablet.

Alas, this is one of the problems of fragmentation: Trying to keep everyone happy.
Reply  |  Post Message  |  Messages List  |  Start a Board
Editors' Choice
Hot Topics