Google prepares to add tablets to devices that might use its 3D mapping system to enrich commerce, gaming, and more.
Google I/O 2014: 8 Things To Watch
(Click image for larger view and slideshow.)

The company plans to make about 4,000 Project Tango-enabled tablets starting next month, according to The Wall Street Journal, equipped with a set of sensors and electronics similar to those in its Project Tango phones: a depth sensor, two cameras, gyroscopes, orientation sensors, and a vision-processing system.

As it happens, next month is Google's annual developer conference, Google I/O, and 4,000 is just about the number of devices the company might order if it intended to distribute them to conference attendees.

Project Tango comes out of Google's Advanced Technology and Projects (ATAP) group, which used to be part of Motorola Mobility. It's an effort to equip mobile devices with the sensors and circuits necessary to create 3D models of local environments in real time.

On Thursday, IEEE Spectrum reported that researchers at the University of Pennsylvania, led by professor Vijay Kumar, had incorporated a Project Tango phone into one of their quadrotor unmanned airborne vehicles (UAVs) to provide the miniature aircraft with a sense of its location without using GPS. 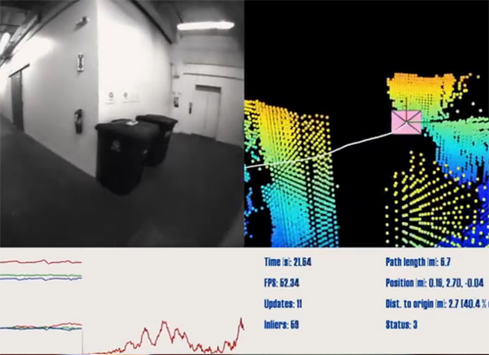 A video posted by Kumar shows how the quadrotor can hover in place using Project Tango data and can fly back to that place if pushed into a different position. The advantage of navigating without GPS is that Project Tango guidance is more accurate -- initial tests suggest accuracy within a centimeter, compared to a few meters for GPS -- and doesn't require a wireless signal.

Detailed real-time maps of a person's surroundings could prove useful for a variety of applications beyond navigation, such as advertising, entertainment, and ecommerce. The possibilities for mobile games are particularly intriguing. A developer could create a multiplayer version of laser tag, for example, because the positions of players in the real world would be instantly accessible through their Project Tango-enabled phones. Another possibility might be a spatial diff check app, which could allow users to determine what, if anything, has changed in a given room or area.

To create such apps, Google has to get its technology into the hands of developers and to encourage them to experiment. The company began doing so in March when it distributed a few hundred Project Tango phones. Project Tango tablets appear to be coming shortly.

Thomas Claburn has been writing about business and technology since 1996, for publications such as New Architect, PC Computing, InformationWeek, Salon, Wired, and Ziff Davis Smart Business. Before that, he worked in film and television, having earned a not particularly useful ... View Full Bio
We welcome your comments on this topic on our social media channels, or [contact us directly] with questions about the site.
Comment  |
Email This  |
Print  |
RSS
More Insights
Webcasts
Protecting Your Enterprise's Intellectual Property
Making Cybersecurity Work in Small and Medium-Sized Businesses
More Webcasts
White Papers
How to Prioritize Risk Across the Cyberattack Surface
The 2020 Duo Security Trusted Access Report
More White Papers
Reports
Building an Effective Cybersecurity Incident Response Team
Email Security Threat Report 2020
More Reports

Google always outdoes itself with the kind of inventions they make. They are simply great and also fun. This kind of technology can be used to save lives out there so for that I have to agree with SachinEE, rescue missions that require a lot of walking and searching can be made easier by such kind of technology if Google decides to create such technology, disasters would be easy to deal with.
Reply  |  Post Message  |  Messages List  |  Start a Board

You're right, aside from military use, the ability to map 3D locations would be a huge asset for first responders such as fire and medical who would be able to easily navigate low-visibility environments or to quickly locate a person, providing better response times and hopefully reduce negative effects like time spent in toxic environments (smoke, fire etc).
Reply  |  Post Message  |  Messages List  |  Start a Board

I've just checked out project tango on youtube and found it amazing. The fact that the flight robot does not use gps suggests that it can be sent to solo missions without monitoring. I'm pizza delivery and military. Imagine such robots equipped with guns and sent to rescue missions; it would be just like in the movies. Google is doing such a good work, this innovation if synched with modern medicine will 'give sight to the blind' thumbs up google!
Reply  |  Post Message  |  Messages List  |  Start a Board
Editors' Choice
Hot Topics