50%
Tweet
Meet the Nexus 7, the first Android tablet sold directly by Google and the first to run Android 4.1, a.k.a. Jelly Bean. The 7-inch tablet is priced like an ebook reader but offers a lot more. Its low price, big screen, and impressive performance might give Apple's iPod Touch and low-end iPad a run for the money, too. Don't completely count out Samsung's Galaxy Tab 2 7.0 just yet, though. 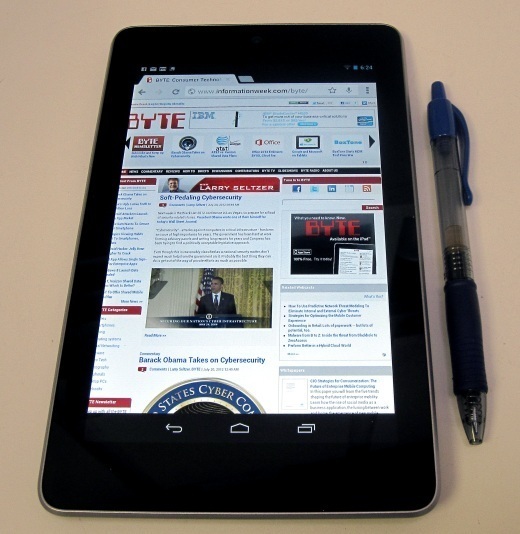 Although the Samsung Galaxy Tab 2 7.0 might have been this year's first must-have Android tablet, the Google Nexus 7, the first Android tablet distributed by Google, is a hot item right now. The 16GB model of the new Asus-manufactured 7-inch tablet was out of stock for a while but is available again.

The Nexus 7 is the first tablet to be based on Android 4.1, code-named Jelly Bean. (A minor update--version 4.1.1--was available when I first turned on my Nexus 7 on July 19.) Jelly Bean is a vast improvement over the last two versions of the Android OS. Android 3, a.k.a Honeycomb, was a sluggish, half-baked operating system that made for a maddening tablet experience. Android 4.0, also known as Ice Cream Sandwich, brought stability and a better overall user experience. Jelly Bean, combined with the Nexus 7's quad-core processor, provides a faster, more-responsive touch experience that approaches Apple's iPad.

The Nexus 7 has some blemishes, chief among them limited storage and an ill-fitting case, but it's hard to ignore its overall appeal. Here's why I think the Nexus 7 deserves the attention it has gotten so far--and why the Samsung Galaxy Tab 2 7.0 might still be a tablet worth considering.

Name: Nexus 7
Price: $199 (8GB), $249 (16GB)
The first Android tablet to be sold directly by Google, the Nexus 7 is shaking up the 7-inch tablet market with aggressive pricing, performance, and features. It could give Apple's rumored 7-inch iPad a run for its money.

Comment  |
Email This  |
Print  |
RSS
More Insights
Webcasts
Cloud Security Threats Enterprises Need to Watch
Are You Ready for When Cyber Attackers Get In?
More Webcasts
White Papers
Using AI to Power AppSec
NetFlow vs Packet Data
More White Papers
Reports
Can You Spare 10-12 Mins to Help Us Out with a Survey on Tech Trends?
Got 7 Minutes? Dark Reading Needs Your Help With Our Survey on Incident Response
More Reports