I praised Google's first Nexus-branded Android tablet, the 7-inch Nexus 7 as the "best bang for the buck of any tablet available" in my last review. Last month, Google began shipping its first 10-inch Nexus, so I wondered, does it follow in the footsteps of its smaller sibling? 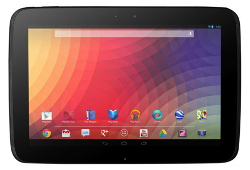 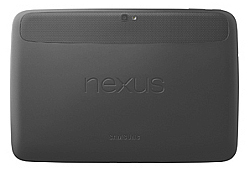 Google Nexus 10 front and back

Physically, the Nexus 10 stays well within the 0.4-inch thickness and 22-ounce weight typical of well-designed 10-inch tablets. The Nexus 10 has an elegant appearance, with gently rounded corners and a hint of ovalness. Its rubbery back surface makes it more comfortable to hold than Apple's more ridged iPads.

How Samsung, who builds the Nexus 10 for Google, managed to squish so much computing muscle along with a 9000mAh power pack into such a svelte body is a mystery. The body also has Corning Gorilla Glass 2, which enables the use of up to 20 percent thinner glass while maintaining "industry-leading" damage resistance, toughness, and scratch-resistance, according to Corning.

The devices were designed with two different hardware partners. Samsung manufactured the Nexus 10 and Asus made the Nexus 7. To find out how the two tablets compare, I summarize their key features and specs in the table below.

Comparison of Nexus 10 and Nexus 7 features and specs

On top of all that, both tablets have NFC short-range wireless, which implements an Android Beam function, and both have built-in accelerometer, gyroscope, and magnetometer sensors. Unique to the Nexus 10 are a magnetic "Pogo pin" port on the bottom, for docking and charging, and a barometric sensor, which can be used in altimeter applications.

Also, the Nexus 10 implements MIMO (multiple-input and multiple-output) WiFi. The use of multiple receive/transmit antennas enables boosting WiFi performance by up to 400 percent, according to Google.