Intel may be the biggest loser if Asus cancels dual Windows-Android devices due to operating systems makers' objections.

Asus's introduction of the Transformer Book Duet TD300 at the Consumer Electronics Show earlier this year was a big deal. Brian Krzanich, Intel's CEO, joined Asus on stage and helped show off the convertible, a dual-boot machine that could run both Microsoft's Windows and Google's Android operating systems. Asus envisioned it would be a work machine by day and a personal media device by night. Two months later, it appears the product has become the victim of disapproval from the two OS giants.

Asus has "indefinitely postponed" plans to sell the device, according to sources cited by The Wall Street Journal. The postponement comes after Microsoft and Google made clear to Asus their feelings about such a device. It's no surprise that each platform maker wants devices to run only one platform. There's no incentive for Google or Microsoft to allow the other's OS to coexist on the same machine.

Patrick Moorhead, an analyst at Moor Insights & Strategy, explained there are several ways in which Google and Microsoft can put pressure on their hardware partners. Android may be free to use, but in order to access Google Services -- the Play Store and vital apps such as Gmail, Maps, and YouTube -- hardware makers have to agree to certain restrictions. Google can withhold Play Services if it doesn't like the device, which would all but negate the appeal of the Android OS. Similarly, Microsoft can withhold marketing money if it isn't pleased with what hardware makers do with their gear. Marketing cash is particularly important to OEMs that make low-margin hardware.

[Microsoft is anxious to get more OEMs on its side. Will Microsoft Waive Windows Phone Fees?]

Google declined to comment on the Journal's story, but Microsoft said it "will continue to invest with OEMs to promote best-in-class OEM and Microsoft experiences to our joint customers."

The revelation raises questions about Huawei's plans to offer a dual-boot smartphone that runs both Android and Microsoft's Windows Phone. The company confirmed the plans this week, and said it will sell the smartphone in the US later this year. Will the product even make it to market, though? Will Google and Microsoft exert the same pressure on Huawei that they (apparently) exerted on Asus? 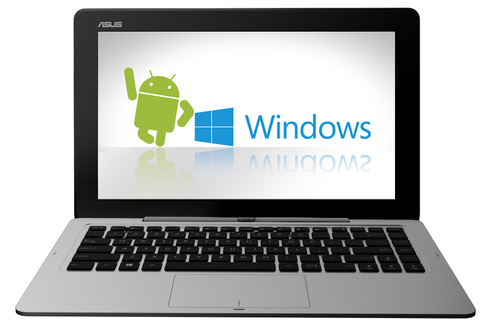 While Asus and Huawei are staring lost R&D dollars in the face, Intel is the biggest loser here. It engineered processors that are capable of running two operating systems, and these chips were to play a crucial role in the dual-boot machines in question. Intel is desperate to gain a significant toehold in the smartphone and tablet space, but is badly trailing competitors such as Qualcomm, Samsung, and others. If there's one thing dual-boot machines offer, it is differentiation. Intel was counting (perhaps too much) on such differentiation to sell devices with its chips inside.

There's also the question of demand for such machines. Are consumers and enterprises actually clamoring for machines that run two operating systems, or are hardware makers foisting them on the market in the hope of creating a niche? What's the real benefit? It could boil down to apps. The number of apps available to Android devices is more than 1 million. Can Microsoft claim the same about Windows 8?

Eric is a freelance writer for InformationWeek specializing in mobile technologies. View Full Bio
We welcome your comments on this topic on our social media channels, or [contact us directly] with questions about the site.
Comment  |
Email This  |
Print  |
RSS
More Insights
Webcasts
Hybrid Cloud: The Great Balancing Act
Optimizing App Performance in the Cloud
More Webcasts
White Papers
Why Add Security to Your Skill Set and How to Do It
Accelerate Threat Resolutions with DNS
More White Papers
Reports
The State of DevSecOps Report
Special Report: Edge Computing: An IT Platform for the New Enterprise
More Reports

I would have loved to have a dual-boot tablet or better still side-by side Windows/Android.


I had my eye on the Samsung ATIV Q, but it has not been released due to problems with Windows/Android co-existence. The Samsung ATIV Q, had everything keyboard for Windows use and touchscreen for android. I am sure it would have been expensive knowing Samsung, but at least people have options.

The tablet also needs to have mini-HDMI and capability for 4k monitor output.... thats the future.
Reply  |  Post Message  |  Messages List  |  Start a Board

Right now the expanding market is in the youngest and future buyers segment. They know what they are looking for. Those companies that don't recognized it will lose market participation very soon. Asus has built a rock solid business computers (as years ago were recognized Thinkpads because were built to last), also has powerful gaming laptops, and has recognized a big market to reach into, first with students and after with professionals. For millennials generations, don't like the rules and are used to constant change. And the game's rules are changing. Intel has the right perception and Asus as Huwei the right products but not the regulated rules by their side. Younger owners said Win 8.1 is not as bad but has a big weakness: Application market. Android has a rock solid Application market. The future in short to middle term is for dual products. I don't want to spend money in three physical devices: laptop, tablet and phone. But logically only have two: Android or windows. The best will be have all devices in one has Asus showed to the market: Business laptop, excelent tablet and I have two world in one device. Only missing the phone. Apple is the solid challenger to defeat...for a while.
Reply  |  Post Message  |  Messages List  |  Start a Board

It's not hte hardware that worries me, its the cross contamination of platforms via apps, or at least the potential chaos that could come from it.  For one, if the two OSs are sitting in their own partitions, there is data duplication issues, causing less than ideal performance from the device.  If they do indeed talk to each partition, where does support lie?  is it an Android tablet or a Windows tablet?  from a marketing perspective, Microsoft would probably want to piggyback on one of the hottest platforms (Android) to help boost numbers, but it might also fear that users who purchase it for using Windows will falter to the Android platform, although the opposite could potentially happen as well.
Reply  |  Post Message  |  Messages List  |  Start a Board

That is interesting.  When one party sees the benefit I guess it makes people wonder if it's really good for them too.  I don't know that the fear should be a dual boot system though. I think the bigger fear should be applications being run natively or with minimal emulation inside another OS.
Reply  |  Post Message  |  Messages List  |  Start a Board

"Intel is the biggest loser here. It engineered processors that are capable of running two operating systems, and these chips were to play a crucial role in the dual-boot machines in question"


Here's an interesting point that's tangential to this quote... at CES, Intel reps strongly implied, though did not say, that "dual OS" had Google's blessing. Specifically, they said Intel worked with Google to make Android run on x86 chips-- but that likely refers to Atom smartphones and tablets, not the Core-based "dual OS" chip in the Asus Transformer. It struck me at the time that the comments were carefully worded.
Reply  |  Post Message  |  Messages List  |  Start a Board

@kgreenhow530, you make a good point. Windows Phone-Android smartphones seem to be coming along, regardless of this reported hurdle to Windows 8.1-Android tablets and hybrids. Running Android and Windows on an ARM chip seems to be one thing; running Windows 8.1 and Android on an Intel Core chip seems to be another.
Reply  |  Post Message  |  Messages List  |  Start a Board

Personally, I would love to be able to run Windows and Android apps side by side, or at least be able to run Android apps in a virtual machine within Windows.  Dual-boot may have more appeal to software developers.  Craig Herberg
Reply  |  Post Message  |  Messages List  |  Start a Board

Why do we need a special processor to run both? I thought windows 8 rt and android could run on processors like snapdragon? I think the public should demand this kind of product. Consumers are the ones who are spending the money and already carrying multiple devices. Besides if the giants continue to say no, the tech savy public will just create what they want through other third party methods.
Reply  |  Post Message  |  Messages List  |  Start a Board

"Intel is the biggest loser here. It engineered processors that are capable of running two operating systems, and these chips were to play a crucial role in the dual-boot machines in question"

This is the first I have heard about these processors and I have to say that this is incredible news.  Even if the bigger manufacturers don't put out a dual boot device if Intel has the chipset then someone is going to do it.  This will be a nice step up from running Android applications in an emulator.
Reply  |  Post Message  |  Messages List  |  Start a Board

Was this along time ago before things like VMWare, VirtualBox or Parallels?  I've never used parallels, but I haven't had trouble when using VMWare or VirtualBox to run Linux under Windows.
Reply  |  Post Message  |  Messages List  |  Start a Board
Page 1 / 2   >   >>
Editors' Choice
Hot Topics