Pop-up outlets called Winter Wonderlabs will open soon in six cities around the US. 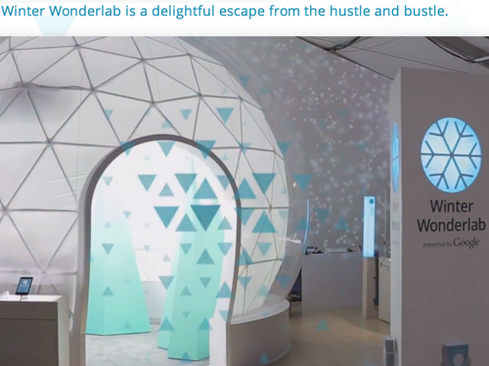 To warn of the coming of British troops in 1775, Paul Revere, in a poem by Henry Wadsworth Longfellow, arranged to have the number of visible lanterns communicate the manner of the soldiers' approach: one if by land, two if by sea.

To tell of Google's entry into the retail business, a third lantern would be required: The search advertising giant is coming by land and by sea. As Google tries to finalize a berth in San Francisco, Calif., for its floating barge technology exhibit, the company is also preparing to open pop-up product showrooms called Winter Wonderlabs in Annapolis, Md.; Aurora, Ill.; Canoga Park, Calif.; New York, N.Y.; Paramus, N.J.; and Roseville, Calif.

These winter-themed stores will display and take orders for Google products, such as Nexus 7 tablets, Chromebooks from the company's hardware partners, and Chromecast streaming media devices. They won't be fulfilling orders on the spot, however.

Google's gadget outlets will also offer visitors the opportunity to be filmed while cavorting in a geodesic dome during a simulated snowstorm. "Bring friends or family members (we'll provide the fake snow) and step into the giant Snow Globe to create amazing slow motion videos that are yours to keep and share," Google explains on the Winter Wonderlab website.

Google plans to provide video participants with a "snow pass ID" that can be used to log into the Winter Wonderlab site for viewing the video. Google didn't immediately respond to a query about whether it might use customer videos for advertising the Google retail experience.

Kenneth Wisnefski, president and founder of Webimax, a search consultancy, sees Google's retail experiment as a way to develop new revenue channels and to increase the company's brand influence.

"Over time, we'll start to see Google have Google Stores that are similar to what Apple has done," he said in a phone interview. "Not everywhere, like Verizon, but in select places."

Chances are it will take Google years and a larger product line to match Apple's success as a retailer. In October, Apple said it had 416 retail stores, 162 of which are outside the US. The company earned $4.5 billion in revenue from its retail operations during the third quarter of 2013, its fiscal fourth quarter. Microsoft, pursuing a similar strategy, has close to 50 stores.

But clearly, Google has to undertake this, because its e-commerce efforts have been underwhelming, at least with regard to physical goods. The company tried selling its Nexus One exclusively online in early 2010 and then gave up in May of that year. Google's Andy Rubin, in charge of Android at the time, conceded that hardware products sell better when they can be handled. "[I]t's clear that many customers like a hands-on experience before buying a phone, and they also want a wide range of service plans to chose from," Rubin said.

InformationWeek 500 companies take a practical view of even trendy tech such as cloud, big data analytics, and mobile. Read all about what they're doing in our big new special issue. Also in the InformationWeek 500 issue: A ranking of our top 250 winners; profiles of the top five companies; and 20 great ideas that you can steal. (Free registration required.)

We welcome your comments on this topic on our social media channels, or [contact us directly] with questions about the site.
Comment  |
Email This  |
Print  |
RSS
More Insights
Webcasts
How the Rapid Shift to Remote Work Impacted IT Complexity and Post-Pandemic Security Priorities
SASE: The Right Framework for Today's Distributed Enterprises
More Webcasts
White Papers
Annual Cybercrime Report
ITSM for the Enterprise - What Makes it Work?
More White Papers
Reports
We Need Your Input: Trends in Workforce Optimization
Dark Reading Report: Battle for the Endpoint
More Reports

It's easy to write off these kitschy stores, but Google is doing a better job of making them a more memorable experience for consumers than Microsoft did with its static pop-up Surface stores and booths. I think the "Winter Wonderlabs" -- with its simulated snowstorm and snow pass ID and all -- achieve that goal, which is probably one of the most important things for the company during the holiday season.
Reply  |  Post Message  |  Messages List  |  Start a Board

Or San Francisco! I know we have their barge floating over by Treasure Island, so I guess I shouldn't complain... Roseville is near Sacramento, and Canoga Park covers Los Angeles-- but nothing for the San Jose, San Francisco, or anything else in Google's backyard.
Reply  |  Post Message  |  Messages List  |  Start a Board

Nevermind that it's a popup, how do they put them in NYC and Paramus and not Boston? #Robbed
Reply  |  Post Message  |  Messages List  |  Start a Board

Going with pop-up showrooms rather than permanent stores doesn't inspire much confidence, for me at least. Does anyone else think Google would be better served by publicly committing to a retail space and being forced to make it work?
Reply  |  Post Message  |  Messages List  |  Start a Board
InformationWeek Is Getting an Upgrade!