At Mobile World Congress, the head of Google's accessibility engineering team explained how the Internet of Things can help those with disabilities.

BARCELONA – It was the last panel session of the Mobile World Congress, and the topic was business models for "connected" consumer packaging in the world of the Internet of Things. The moderator threw the floor open for questions, and one woman in the audience asks how this explosion of connected products could help people with disabilities?

It was a good question, and I wanted to know more about what this would mean in the IoT world.

I went up to talk to her at the end of the session and she introduced herself as Eve Andersson.

Andersson, who holds the title of manager, accessibility engineering at Google Research, oversees the company's central accessibility team, which is dedicated to developing special features for people with disabilities and making sure that all Google products are designed with accessibility in mind.

During the Mobile Accessibility session at MWC, Andersson spoke along with the chief accessibility officers from IBM and Microsoft.

Since the United Nations estimates that about 15% of the world's population lives with some type of disability, it is critical for the mobile industry to design specific products and services that can help the disabled enjoy the full benefits of digital society.

I asked Andersson about this and she immediately said: "I have a lot to tell you."

Andersson started by describing her group and its role within Google. She mentioned three main roles for the Accessibility Engineering Team:

Andersson gave an overview of the different features that Google has implemented in different products, such as the Chrome browser, YouTube, Hangouts, Chrome OS, and others.

In many Google products, there are already existing features such as magnification, talkback, captioning, large text, and text-to speech that help those with disabilities. Andersson then mentioned what Google is putting into the latest version of Android. 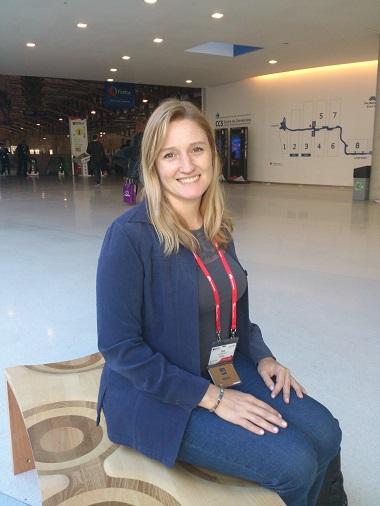 Eve Andersson, who works at Google Research, at the Mobile World Congress in Barcelona.

An important app that Google built for Android, she says, is "Braille Back." As Andersson noted:

One new feature, recently released within Android 5.0, or Lollipop, is Switch Access.

She explained: "Switch Access allows somebody who uses a mechanical switch to use their device. If you have limited use of your limbs then it’s very difficult to use a phone that uses a touchscreen. Stephen Hawking, for example uses a switch which detects when he moves his cheek muscle."

That is one example of a switch.

Google has also added into Android the ability for somebody to control a device using one or more switches. When people use just one switch, then the device automatically scans through the different options that they could press until the switch is pressed, which then opens the application or types the letter that is highlighted.

However, the ability to use more switches means the users has more control. Each switch could correspond to a different function, such as "next," "back," or "home."

"This opens up Android to a whole new group of people, that have not been able to use it before," she said. "And this is really important because generally people with disabilities do not want to have hardware that is just for them They want to have the normal hardware that all of their friends have, that has all the cool applications on it … In classrooms, people want to be able to use the same hardware that their classmates use, and so by building in these functions into stock Android, as opposed to a separate device, people don’t have to be segregated."

[Read about the coolest products from MWC 2015.]

As for whether people need to download separate apps to use these functions, she said: "Switch Access is built into [on Android OS 5.0]; TalkBack, magnification, those are all built-in, BrailleBack they have to download, but it is free."

Andersson is also excited about the possibilities of the IoT and wearables for people with disabilities.

"There are two components to accessibility: One is helping people use software to navigate the virtual world, but the other component is to help people navigate the real world," she told me. "I think that’s where wearables and the IoT are coming in, and we are going to see a lot of innovation in the coming years."

As the conference venue was closing down and we walked to the exit I asked her about the satisfaction of what she does at Google, and she replied: “It makes me feel good every day because I get to help people."

Pablo Valerio has been in the IT industry for 25+ years, mostly working for American companies in Europe. Over the years he has developed channels, established operations, and served as European general manager for several companies. While primarily based in Spain, he has ... View Full Bio
We welcome your comments on this topic on our social media channels, or [contact us directly] with questions about the site.
Comment  |
Email This  |
Print  |
RSS
More Insights
Webcasts
Unifying Your Endpoint Security Strategy
An Enterprise Guide to Web Security
More Webcasts
White Papers
Using Zero Trust to Protect Today's Remote Workforce
Incident Readiness and Building Response Playbook
More White Papers
Reports
Intel 471 Breach Report
SANS 2021 Cloud Security Survey
More Reports

I suspect there's not much choice for companies. We can't as a society deny people with disabilities access to services just because we've shifted to digital interaction.
Reply  |  Post Message  |  Messages List  |  Start a Board
InformationWeek Is Getting an Upgrade!