TAG Heuer's Android Wear-powered smartwatch is expected toward the end of the year.

Google, Intel, and TAG Heuer on Thursday announced plans to collaborate on a Swiss smartwatch based on Intel electronics and Google's Android Wear software.

At a March 19 press event in Switzerland, TAG Heuer CEO Jean-Claude Biver introduced his company's partners as "the people who will give birth to the greatest connected watch of TAG Heuer."

Biver brought with him 35 kilos (77 lbs.) of Gruyere cheese. "Today I decided I bring this cheese down from the Alps, made with my 86 cows, and everybody will get a piece of cheese, because we need to share. We share tradition. We're gonna share also the future." 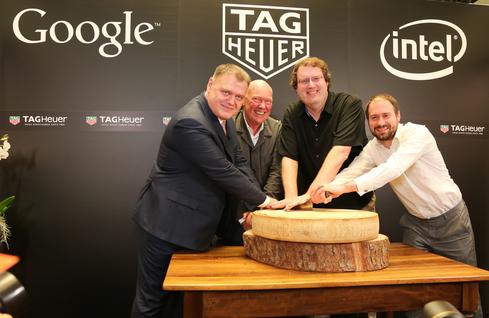 Or so Biver hopes. The Swiss watch industry faces a challenge from Apple, which plans to launch the Apple Watch next month. The industry's share could dwindle in the future.

In an interview with Bloomberg earlier this month, Elmar Mock, co-creator of the Swatch, questioned why Swiss watch companies haven't taken stronger steps to compete in the smartwatch market. He predicted that Apple's entry into the market will put watchmakers in Switzerland and elsewhere under pressure.

Gartner suggests the real battle will occur not in Switzerland but in China. In February, the research firm predicted that 50% of smartwatch shipments in 2015 will occur in China and that Apple could capture 10% to 15% of that market.

Another research firm, CCS Insight, believes Apple will sell around 20 million Apple Watches by the end of 2015, a figure expected to account for about a quarter of the market. The Apple Watch starts at $350 and goes up to $17,000 for an 18-karat gold model.

For TAG Heuer, the issue will be crafting a watch that competes with the Apple Watch in terms of functions while being stylish enough to justify luxury pricing. That's where Google and Intel come in, despite Gartner's expectation that Chinese-made Android Wear models will drive the price of smartwatches down. Google, Intel, and TAG Heuer intend to present the result of their collaboration during the fourth quarter of the year.

Biver acknowledged at the press conference that the technology disadvantage of mechanically focused watchmakers by stating, "We need people who help us connect. We cannot connect alone."

Such sentiment fits Google and Intel, both of which have a long history of working with partners. "We can achieve so much more working together than on our own," said David Singleton, director of engineering for Android Wear.

Apple might not agree. The company has thrived by pursuing its hermetic vision, powered by its own technology and design, without the burden of partners. In a few months, we will know which approach the market will reward.

Thomas Claburn has been writing about business and technology since 1996, for publications such as New Architect, PC Computing, InformationWeek, Salon, Wired, and Ziff Davis Smart Business. Before that, he worked in film and television, having earned a not particularly useful ... View Full Bio
We welcome your comments on this topic on our social media channels, or [contact us directly] with questions about the site.
Comment  |
Email This  |
Print  |
RSS
More Insights
Webcasts
Zero Trust for a Work-From Home World
Cybersecurity's Next Wave: What You Should Know
More Webcasts
White Papers
Why Add Security to Your Skill Set and How to Do It
Balancing Hybrid Storage as Part of a Hybrid Cloud Data Management Strategy
More White Papers
Reports
Assessing Cybersecurity Risk in Todays Enterprises
Building an Effective Cybersecurity Incident Response Team
More Reports

These watchmakers must bring in digital to their products -- I caught some heat from watch afficionados when I wrote that originally, people who thought the beauty of these luxury device was their mechanical brilliance. This speaks to how one watchmaker might bridge the gap, by brininging in the digital chops it needs. We'll see how well the cooperation works.
Reply  |  Post Message  |  Messages List  |  Start a Board

I have high hopes for this Google+Tag Heuer work. In my honest opinion I would care less if they give a hefty price tag over the watch, just like apple did, but I think they won't be making the same mistake. Moreover its a Google product, it is going to be more flexible by default.
Reply  |  Post Message  |  Messages List  |  Start a Board

> In a few months, we will know which approach the market will reward.

Really? I dont see how likes of Tag Heur still stand a chance! IMHO they'll meet the same fate as of publishing industry or ex-phone manufacturers like BB and Nokia refusing to get out of their own worldview.
Reply  |  Post Message  |  Messages List  |  Start a Board

Great move by Google, Intel and TAG Heuer because collaboration is extremely important. I have often wondered what makes a helium release valve so desirable that major watch manufactures market their products with helium release capability -- what's the percentage of scuba divers in any given average population?
Reply  |  Post Message  |  Messages List  |  Start a Board
Editors' Choice
Hot Topics