Shenoy showed off a new Chromebox from HP, coming in June, aimed at consumers and businesses, and LG's Chromebase, a Chrome OS desktop computer similar to Apple's iMac. Both rely on Intel Celeron chips based on the company's Haswell microarchitecture. The Chromebase will be available on May 26 with a suggested price of $349.

Shenoy also presented Celeron-based Acer, ASUS, Lenovo, and Toshiba devices that are the first to employ Intel's Bay Trail-M system-on-a-chip (SoC), silicon, which promises up to 11 hours of battery life. Bay Trail processors are designed for mobile devices and thus prioritize power conservation over computational might. Chrome OS devices using Bay Trail processors run quietly because they do not include a fan.

Lenovo, which has shipped Chromebooks for the education market, launched its first consumer Chromebooks, the N20 ($279) and N20p ($329). Both are laptops but the N20p screen -- like that of its education market analog, the Thinkpad YOGA 11e Chromebook -- can flip back all the way so that it rests on the underside of the keyboard, as if it were imitating a tablet. 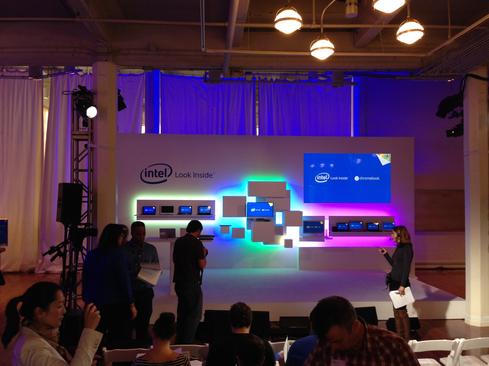 Shenoy said that this summer, Acer and Dell plan to introduce devices based on Intel's fourth-generation Core i3 processor, a processor tuned more for performance than battery life. A step up from the entry-level Celeron processor, the Core i3 provides a better experience when using multiple browser tabs or processor-intensive Web applications.

Dell expects to offer a Core i3 version of its Chromebook 11, presently offered to education customers, to business customers later this year. Acer should make its Core i3-based C720 Chromebook available about the same time.

All of Intel's Chrome devices are powered by "conflict-free" microprocessors, which is to say that the electronics do not rely on metals sourced from mines under the control of armed groups in the Democratic Republic of Congo or neighboring countries.

Caesar Sengupta, VP of product management for Chrome OS, said Google was pleased with the momentum of Chrome OS. "The whole experience is resonating really well with our customers," he said.

Sengupta said Chrome OS users can look forward to being able to watch movies offline, with the launch of the forthcoming Google Play movies app. Limited offline functionality has long been considered a problem for Chrome OS devices, but has become less so as Google has adapted more of its Web apps to run offline.

Sengupta resisted the suggestion that Chromebook vendors face a challenge differentiating commoditized Chrome OS hardware. Chromebooks, he said, are a combination of hardware, software, and the overall experience. Things such as keyboard quality, screen size, and hinge quality can make a big difference to users, he said.

Thomas Claburn has been writing about business and technology since 1996, for publications such as New Architect, PC Computing, InformationWeek, Salon, Wired, and Ziff Davis Smart Business. Before that, he worked in film and television, having earned a not particularly useful ... View Full Bio
We welcome your comments on this topic on our social media channels, or [contact us directly] with questions about the site.
Comment  |
Email This  |
Print  |
RSS
More Insights
Webcasts
What We Can Learn from Sports Analytics
Making Cybersecurity Work in Small and Medium-Sized Businesses
More Webcasts
White Papers
Two-Factor Evaluation Guide
Universal Internet Connectivity: Reality or Myth?
More White Papers
Reports
Building an Effective Cybersecurity Incident Response Team
2020 State of DevOps Report
More Reports

That explains a lot.  I've heard of some municipalities trying to move to Google Apps and being frustrated that paying for the service doesn't offer them any more reliability than free accounts and the bursts of traffic to Google rather than staying on their local networks caused a whole new set of problems.
Reply  |  Post Message  |  Messages List  |  Start a Board

Gmail and Google Apps for educational institutions is free. Universities with tens of thousands of students might see a cost, but your average school of several hundred to a couple thousand get the applications for free. It's very compelling for many cash-strapped school corporations.
Reply  |  Post Message  |  Messages List  |  Start a Board

That's interesting to hear.  I assumed that Microsoft would subsidize hardware in the education segment too.  I have to wonder what is compelling schools to move away from Exchange and Office to go to GMail and Google Docs.  At that size they still have to pay for the licensing, is it that much better?
Reply  |  Post Message  |  Messages List  |  Start a Board

I get the same pricing that schools receive. It is very compelling. It doesn't apply to hardware from Microsoft, unfortunately, unless you get a grant from Microsoft or the Gates Foundation. There is a growing number of academic institutions at all levels moving away from Exchange and SharePoint to Gmail and Google Docs. Moving from a Windows laptop or tablet to a Chromebook is a logical next step in that evolution as that market expands from Microsoft and Apple (who have historically owned it) to include Google, and possibly other players in the future.
Reply  |  Post Message  |  Messages List  |  Start a Board

I've found that even inside the same county education system the incentives and subsidies can vary greatly.  My two youngest changed schools last year and we went from everything being very heavily Microsoft based to some open source and freemium alternatives being presented to them as options.  It is odd that the kids don't have to write papers so much anymore but give presentations.  In years past it was all PowerPoint but lately it has been all about Prezi.  The teachers still use Windows based PCs and the media centers are 90% PC with a couple of ancient iMacs so it is a weird mix.  I'm sure that if Microsoft wanted 100% of the school's infrastructure they could easily offer some incentives and those iMacs would disappear.
Reply  |  Post Message  |  Messages List  |  Start a Board

@SaneIT incentives and subsidies make sense in that market. Considering the number of Microsoft-only programs used in instruction would also help make that decision.
Reply  |  Post Message  |  Messages List  |  Start a Board

it all depends on the point of view... and if WiFi is available... some of my customers do love Choromebooks... some do not...
Reply  |  Post Message  |  Messages List  |  Start a Board

The concept of Chromebooks is nice, but the problem with Chromebooks is Chrome OS with the direct link to Google. There is no user control over which data is kept out of Google's hands. Google has to fix its bad reputation and show more openness and transparency as well as far more restraint in trying to grab any bit of personal data and turning it into cash.

Until then people will buy Chromebooks as cheap Linux hardware.
Reply  |  Post Message  |  Messages List  |  Start a Board

The school IT staffs that I have dealt with here locally would really shock me if they chose ChromeOS or anything other than Windows for that matter.  From the talks I've had with them they get a lot of incentives straight from Microsoft so it wouldn't surprise me if MS didn't subsidize the cost of some Surface tablets to push a Chromebook out of the picture.
Reply  |  Post Message  |  Messages List  |  Start a Board

There is a value play in Chrome OS... many people don't need anything more than a browser and some webapps. I've long thought that Chrome OS has potential.

I think that people are getting tired of Windows. Version 8 and its redesign of UI was not a smart move. Even though the company was trying valiantly to move things forward, the consumer masses did not want such a drastic change.

i don't expect Chrome OS to change as quickly, since we have all seen that the web as a whole only shifts ever so slightly from year to year.
Reply  |  Post Message  |  Messages List  |  Start a Board
Page 1 / 2   >   >>
Editors' Choice
Hot Topics