Google has agreed to acquire Titan Aerospace, a maker of aerial drones based in Moriarty, N.M., for an undisclosed sum.

Last month, Facebook was negotiating to acquire Titan Aerospace for $60 million, according to TechCrunch. However, shortly thereafter, the social network decided to buy Ascenta, a UK-based drone maker that has been developing solar-powered light aircraft. The Wall Street Journal reports that Google offered to beat Facebook's proposed price.

"Titan Aerospace and Google share a profound optimism about the potential for technology to improve the world," a Google spokesperson said in an emailed statement. "It's still early days, but atmospheric satellites could help bring internet access to millions of people, and help solve other problems, including disaster relief and environmental damage like deforestation. It's why we’re so excited to welcome Titan Aerospace to the Google family." 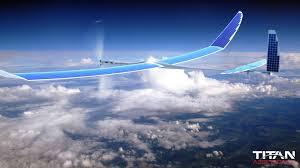 Titan Aerospace is run by Vern Raburn, who previously served as CEO of Symantec, president of Microsoft's consumer products division, and president of the Paul Allen Group. Most recently, he was CEO of Eclipse Aviation.

Like Facebook, Google envisions drones as a new platform, more in the structural sense of the word than the IT sense. It sees solar-powered drones as a way to offer Internet connectivity to remote regions, bringing potential new customers online. Both companies face an increasingly steep climb as they try to push their already substantial user numbers higher.

Aerial drones offer an array of opportunities beyond extending the reach of the Internet. These include: industrial monitoring, scientific research, mapping, communications, and disaster assistance.

Google began experimenting with airborne Internet relaying last year via Project Loon, an effort to loft large balloons carrying wireless Internet routers into the atmosphere to provide connectivity to underserved areas. Earlier this month, the company said that one of its balloons had circled the globe in 22 days.

According to The Wall Street Journal, Google plans to have Titan Aerospace work with Project Loon and also possibly with Makani, another Google acquisition that has developed technology for making airborne wind turbines.

[What else is Google up to? Read Google Glass Tested For Air Force Jumps.]

Drones have attracted considerable interest from commercial companies because the technology has become so capable and because regulatory barriers remain light. Last month, the Federal Aviation Administration's ban on small commercial drones was struck down by a federal administrative law judge. This leaves makers of smaller drones relatively unregulated. While the FAA has statutory authority over commercial aircraft, model aircraft and commercial drones remain in something of a gray area. The rules the agency has put forth on drones have not been issued through established rulemaking procedures, which is likely to leave the legal status of drones unsettled until next year when specific drone rules are planned.

Thomas Claburn has been writing about business and technology since 1996, for publications such as New Architect, PC Computing, InformationWeek, Salon, Wired, and Ziff Davis Smart Business. Before that, he worked in film and television, having earned a not particularly useful ... View Full Bio
We welcome your comments on this topic on our social media channels, or [contact us directly] with questions about the site.
Comment  |
Email This  |
Print  |
RSS
More Insights
Webcasts
How the Rapid Shift to Remote Work Impacted IT Complexity and Post-Pandemic Security Priorities
Cybersecurity Risk Management
More Webcasts
White Papers
2020 SANS Enterprise Cloud Incident Response Survey
The Top 5 Mistakes Everyone is Making in Vulnerability Remediation
More White Papers
Reports
The Need for Speed: Second Generation EDR
Gartner Market Guide for Insider Risk Management Solutions
More Reports