New documents filed with the FCC show an updated design for Google Glass 2, including a folding frame, and other details about the hardware's construction.

Documents filed with the US Federal Communications Commission (FCC) have revealed new details about Google Glass 2, the search giant's updated augmented reality device, including the hardware's ability to fold.

The FCC filing, first spotted by the blog 9to5Google, also shows the power button has now been moved to the back of the device, while the camera button is located on top near the display.

The flat area on the side of the device is called the touchpad, which is used to navigate different cards on the display. 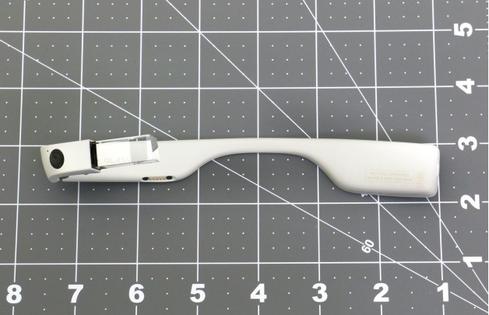 The filing appears to confirm a report in the Wall Street Journal published in July that found Google was passing out an upgraded version of Glass to businesses in the health care, manufacturing, and energy industries. The company decided to move away from the consumer market for the time being.

An earlier FCC filing unearthed by the blog DroidLife reveals that Google has developed a new product labeled GG1, which doesn't confirm the nature of the device but indicates new life for the product.

Details of the filing were scarce, but the report notes the device supports 802.11a/b/g/n/ac WiFi in 2.4GHz and 5GHz, alongside Bluetooth LE connectivity. It is supposed to have rechargeable, non-removable batteries.

Aside from better battery life, Google is also reportedly developing a battery pack which will help the glasses last even longer, a necessary feature if the device is going to wind up on the face of a doctor performing a lengthy operation.

The head-mounted wearable computer allows users to communicate with the Internet through natural-language voice commands or by tapping and sliding on the glasses frame.

Available in limited quantities to early adopters, the $1,500 original gadget promised a sci-fi version of the future, but in January Google announced that it would stop producing the prototype -- noting it remained committed to the development of the product.

The company's widely publicized launch of the product was met with enthusiasm from the tech press but indifference from the general public, with some pundits going so far as to label adopters of the technology "glassholes."

In May, Apple muscled into the AR space with the acquisition of German company Metaio.

Metaio offers a host of products, including a user-friendly augmented reality authoring tool, a software development kit (SDK) comprised of a capturing component, a sensor interface component, a rendering component, and a tracking component, as well as an application-hosting and delivery-as-a-service platform.

[Check out InformationWeek's Google predictions for 2016.]

Whether consumers will come around to the technology remains to be seen. However, a May report from Business Insider found that the overall global wearables market, which includes smart glasses, is projected to grow at a compound annual rate (CAGR) of 35% over the next five years, reaching 148 million units shipped annually in 2019.

Nathan Eddy is a freelance writer for InformationWeek. He has written for Popular Mechanics, Sales & Marketing Management Magazine, FierceMarkets, and CRN, among others. In 2012 he made his first documentary film, The Absent Column. He currently lives in Berlin. View Full Bio
We welcome your comments on this topic on our social media channels, or [contact us directly] with questions about the site.
Comment  |
Email This  |
Print  |
RSS
More Insights
Webcasts
Optimizing App Performance in the Cloud
Nip Ransomware in the FUD: Detecting Attacks Pre-Encryption
More Webcasts
White Papers
Why Add Security to Your Skill Set and How to Do It
Are We Cyber-Resilient? The Key Question Every Organization Must Answer
More White Papers
Reports
The State of Threat Detection and Response
The Malware Threat Landscape
More Reports

I am willing to see the device like those ones in science fiction - frsmless and looks no difference compared to normal glass. Google glass 1 is still so easy to recognize - you will be banned out of the theater.
Reply  |  Post Message  |  Messages List  |  Start a Board
Editors' Choice
Hot Topics