The latest Chromebook from Google is a revamped version of its high-end Pixel.

Google retained the original's pleasing aluminum design, but was sure to give this Chromebook a significant boost under the hood with new processors, more memory, and improved wireless. The Pixel may be the pinnacle of Google's Chromebook line, but it comes with the same limitations inherent to all Chromebooks.

The Chromebook Pixel is an attractive laptop with a clean design and solid specifications. It is relatively thin at 15.1-mm thick and light at 3.3 pounds. Google bestowed the "Pixel" name on this device due to the high-resolution screen, which measures 12.85 inches on the diagonal. It packs 2560 x 1700 pixels, giving it a 3:2 aspect ratio. The screen's brightness rates 400 nit, and it boasts 178-degree viewing angles. Notably, the display supports touch input for those times you want to use your fingers. Speaking of fingers, the Pixel sports a full-size, backlit keyboard and a glass touchpad.

Google turned to Intel's Core i5 and Core i7 processors to give the Pixel some oomph. The Core i5 processor is clocked at 2.2 GHz and has 8 GB of RAM, while the Core i7 is clocked at 2.4GHz and has 16 GB of RAM. It's a shame Google didn't pick Intel's Core M chips, which are in the new MacBook from Apple. The Pixel's processors are paired with Intel HD Graphics 5500, which supports up to 4K video output. Storage options are limited to either 32 GB or 64 GB, but the laptop supports SD memory cards and comes with 1TB of Google Drive storage for a period of three years (same as the original Pixel). 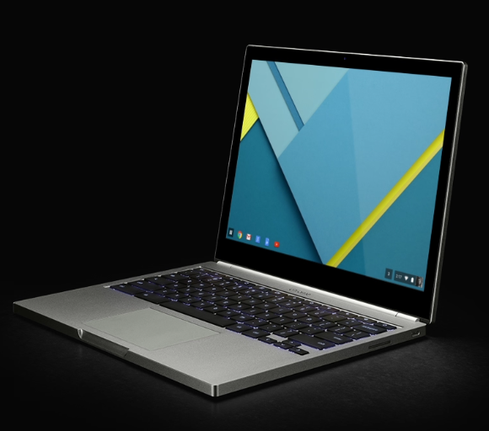 Wireless is essential to Google's Chromebooks, and Google took care to update the WiFi radio in the new Pixel. It supports dual-band (2.4 GHz and 5 GHz) 802.11ac WiFi, in addition to Bluetooth 4.0 Low Energy with a Smart Ready controller. The new pixel drops LTE, however, which was available in the first-generation model for keeping users connected when on the go. Google apparently believes WiFi will suffice.

Battery life lasts an impressive 12 hours. Moreover, the battery supports quick-charge technology. Plugging it in for just 15 minutes will give it enough juice to last for another two hours.

Like Apple, Google sees USB Type-C as the future when it comes to plugging things into the Pixel. Google published a lengthy blog post touting the benefits of Type-C over other connectors.

The Pixel comes with two Type-C ports (unlike the MacBook's single port), which can be used for charging the laptop, connecting accessories, or transferring data at quick rates. Google said we'll see a lot more of Type-C this year, including on Chromebooks and Android smartphones and tablets. Google knows the industry is moving to the new, reversible connector, but (unlike Apple) it didn't abandon legacy devices. The Pixel comes with two, standard USB 3.0 ports, as well as support for memory cards. The Pixel has a combo headphone/microphone jack, stereo speakers, and a built-in microphone for those times you feel like talking to Google Now.

The Chromebook Pixel runs Google Chrome, which is its browser-based operating system. Google has done a commendable job of convincing developers to support Chrome with browser-based apps, but much of the Pixel's functionality relies on a hearty Web connection.

This is one of the first things I wondered when I heard that Apple was moving to the single USB-C port.  Accidently killing an older device because it isn't designed to handle the additional current sounds like a good way to force upgrades.  My other concern though is that we're seeing one or two USB-C ports to take the place of 3-5 various ports.  How irritating is it going to be that you have to carry a dongle that splits the USB-C into 3-4 legacy ports so that you can actually use devices you already own or in the case of that single USB-C port what happens when you can't get one dongle that has all of the port types that you need?  Are you going to be switching back and forth until you get fed up enough to go out and by new peripherals?
Reply  |  Post Message  |  Messages List  |  Start a Board

USB Type C has the potential to not only end the endless reversing of other USB connectors, but the fact that it can provide enough power to charge larger devices like laptops means we finally have a universal charger for all of our gadgets. That's big news.

I'm interested in USB-C but I think it is going to take some time for the industry to catch up with the standard. I also remember when Apple released Thunderbolt, which is still not very common. Yes, it is on many Apple devices. However, the number of peripherals is still small.
Reply  |  Post Message  |  Messages List  |  Start a Board

I'm looking forward to USB-C performance showing up across many devices. Have phones, a GPS watch and fitness bands that all take too long to charge off of USB -- even when using higher-power 2amp USB slots. Will there be any danger for older devices that weren't designed to handle that level of power? Are there safeguards, or are we going to see burned-out batteries and fires caused by this upgrade?
Reply  |  Post Message  |  Messages List  |  Start a Board
Editors' Choice
Hot Topics