50%
Tweet
Google abandons its plans for a floating technology exhibit hall, at least on the East Coast.

A barge that Google intended as "an interactive space where people can learn about new technology" will become a lesson in recycling.

Google confirms that it has sold a barge it had moored at the port of Portland, Maine. The buyer, marine services firm Cashman Equipment Corp., did not immediately respond to a request for comment.

As for the structure atop the barge, it will be scrapped, according to a report in the Portland Press Herald.

The Portland barge is one of two known Google barges spotted last year on opposite coasts. Last October, a barge carrying a large structure was seen at San Francisco's Treasure Island and linked to Google. Initially, it was thought the two barges were floating data centers. But subsequent investigation revealed architectural design documents describing plans for a waterfront cultural exhibition center referred to as "The By and Large Studio."

[Streaming music is about to get even more competitive. Read Google, Apple & The Battle For Your Ears.]

An information packet assembled by Google-affiliated By and Large LLC describes the project thusly: "The artistic structure combines innovative architecture with a bit of nautical whimsy -- creating a surprising environment that inspires conversation, community and 'aha' moments."

But like so many electronic devices, Google's box of whimsy -- at least the Portland one -- will be sold for scrap. It's an ignominious end for a tantalizing technology showcase and an amateurish attempt to outshine Apple's elegant retail stores. 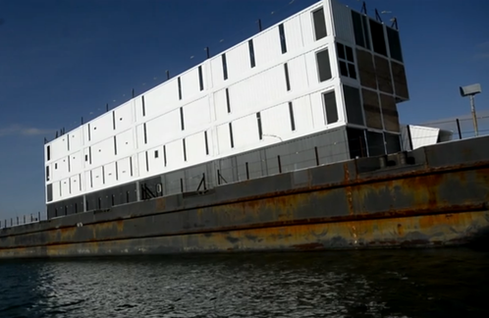 It might also foreshadow the fate of Google Glass, which has struggled for acceptance, received no keynote attention at the company's June developer conference, and in July saw project founder Babak Parviz depart Google for a position at rival Amazon.com. Parviz also ran Google's smart contact lens project.

Glass needs a showroom where people can try the devices on and experience the technology for themselves. When initially distributing Glass to developers, Google invited buyers to just such a showroom at its Mountain View, Calif., headquarters.

The foundering of the Maine barge-borne exhibition space raises doubts about Google's commitment to Glass and to its expected push to open retail stores. Even so, Google's evident interest in Android Wear devices and the growing popularity of Chromebooks suggest that the company still has some reason to establish a retail footprint.

Meanwhile Google's West Coast barge has been moved to the Port of Stockton because Google failed to secure the necessary permits for San Francisco Bay. Stockton lies outside the jurisdiction of the San Francisco Bay Conservation and Development Commission, so Google's barge can remain there without permit issues. Stockton port director Richard Aschieris said in a phone interview that Google had initially agreed to keep its barge at the port for six months and that at the end of the summer, the mooring arrangement converts to month-to-month.

"It's here and it's right where it was originally berthed," Aschieris said, adding that Google has not communicated any plans for the barge or the showroom on top.

Thomas Claburn has been writing about business and technology since 1996, for publications such as New Architect, PC Computing, InformationWeek, Salon, Wired, and Ziff Davis Smart Business. Before that, he worked in film and television, having earned a not particularly useful ... View Full Bio
We welcome your comments on this topic on our social media channels, or [contact us directly] with questions about the site.
Comment  |
Email This  |
Print  |
RSS
More Insights
Webcasts
Emerging Security Threats Your Enterprise Should Be Aware Of
How Cyber Attackers Will Use & Abuse AI, ML Against the Enterprise
More Webcasts
White Papers
Vulnerability Management for Dummies, 2nd Edition
SOC 101
More White Papers
Reports
The New Face of IT Automation
State of Cybersecurity Incident Response
More Reports

@Daniel Most of the products that Google develops won't "graduate" into offerings you're aware of. Google, even more so than Microsoft, is the master of one or two "trick ponies" that subsidize everything else they do. This allows them to fail an awful lot and still have tons of cash and be thought of as a company that innovates.

In reality, Google is an interactive advertising company more than they are a tech company.
Reply  |  Post Message  |  Messages List  |  Start a Board

The mere fact that you never did so when it was available shows why it was a failed endeavor. The reality is that most people didn't want to take the time to go to the exhibit for numerous reasons. It's another "that sounds cool! Let's do it!" idea that didn't take reality into account and is thrown on the trash heap, with all its resources spent and wasted.
Reply  |  Post Message  |  Messages List  |  Start a Board

There are many permits, calculations, ROI's, but as a tech enthusiast, I always wanted to visit the exhibits that showcased techno goodies. I wonder how it would feel like to walk around in these barges, trying new innovations (good or bad), get frustrated or excited. Sigh! That is not goign to happen :(
Reply  |  Post Message  |  Messages List  |  Start a Board

Google Glass is controversial technology. And although there have been some negative developments for the product as of late, I have a hard time believing that products like this will proliferate.

As soon as there is a solid use case for something like this, wearables connected via vision will become a big thing. It's just a matter of time - and its doubtful anyone can predict when something like this will hit critical mass.
Reply  |  Post Message  |  Messages List  |  Start a Board
Editors' Choice
Hot Topics