Future Cars Will Talk To Each Other - InformationWeek

NHTSA gives the green light to develop rules for vehicle-to-vehicle communication systems which let cars converse. Will this prevent crashes?

Drivers today may fume at each other in fits of road rage, but within a few years their cars will be negotiating to avoid accidents.

On Monday, the National Highway Traffic Safety Administration (NHTSA), part of the US Department of Transportation (DOT), said it will move ahead with a plan to draft rules covering the implementation of vehicle-to-vehicle (V2V) communication technology for crash avoidance.

US Transportation secretary Anthony Foxx said in a statement that the technology will play an important role in getting people to their destinations safely while ensuring continued US automotive industry leadership.

Unlike the technology behind Google's self-driving cars, V2V communication is not intended to replace human drivers with automated braking or steering (though the NHTSA is investigating active sensors). Rather, in conjunction with V2I (vehicle-to-infrastructure) systems and GPS data, it's designed to augment situational awareness. It does this by transmitting speed and position data 10 times every second over a dedicated short-range communications (DSRC) network. 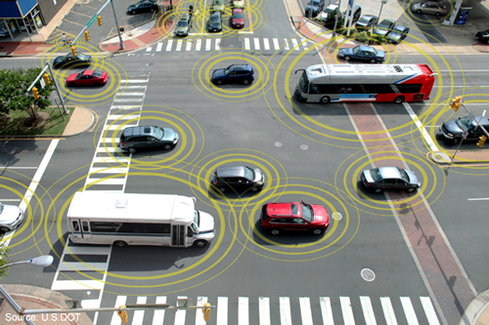 DSRC is similar to WiFi but it operates over a different portion of the radio spectrum: a 75-MHz band around 5.9 GHz. It was chosen over the unlicensed 2.4-GHz and 5-GHz WiFi bands because the proliferation of WiFi-enabled devices could lead to network congestion and interference. In addition, DSRC has been designed to prioritize data associated with safety applications and to handle outdoor networking between vehicles moving up to 120 mph. WiFi was designed for indoor usage at walking speeds.

With V2V and V2I data, the NHTSA believes it can identify risks and help drivers avoid collisions. Two of the potential V2V applications being explored are dynamic speed harmonization and queue warning. Dynamic speed harmonization calculates optimal speeds for vehicles to avoid highway congestion, for automatic or manual speed adjustment. Queue warning checks for car queues in the roadway ahead and provides information about slowdowns.

The NHTSA is still finalizing the results of a year-long pilot study of V2V technology and expects to publish its findings in a few weeks. David Friedman, acting administrator of the NHTSA, in a blog post said the technology "has the potential to help drivers avoid or mitigate 70% to 80% of vehicle crashes involving unimpaired drivers, and that could help prevent many thousands of deaths and injuries on our roads every year."

[This may be a case of public safety vs. personal privacy. See Do Drivers Need More Privacy Protection?]

Though the technology will take decades to become commonplace, its privacy implications can be expected to stir contentious debate. For instance, deploying police officers to catch speeders becomes unnecessary when cars broadcast their speed data 10 times a second -- tickets could be emailed the moment a car exceeds the legal limit. Alternately, cars could have their speed limited to what the law allows, which would cut revenue from moving violation fines, leaving municipal leaders searching for new taxes to cover the shortfall. Or insurance companies might require speed limit compliance monitoring as a condition of a favorable rate, if the option to exceed speed limits remains in human hands.

Cars will soon be talking to one another using V2V communications, but it remains to be determined who or what will be listening and whether cars, their drivers, and other interested parties will be required to act on what's said.

Thomas Claburn has been writing about business and technology since 1996, for publications such as New Architect, PC Computing, InformationWeek, Salon, Wired, and Ziff Davis Smart Business. Before that, he worked in film and television, having earned a not particularly useful ... View Full Bio
We welcome your comments on this topic on our social media channels, or [contact us directly] with questions about the site.
Comment  |
Email This  |
Print  |
RSS
More Insights
Webcasts
Strategies for Success with Digital Transformation
ROI and Beyond for the Cloud
More Webcasts
White Papers
5 Steps to Zero Trust in the Data Center
SANS Report: Measuring and Improving Cyber Defense Using the MITRE ATT&CK Framework
More White Papers
Reports
2020: Threats in Review
2021 Top Enterprise IT Trends
More Reports

It is a great idea to adopt the vehicle to vehicle communication system to avoid car crash as well as accident. It is a great way of prevention from my point of view. If cars will communicate with each other then they may inform the other driver inside an another car about their activity and it will help the driver of the car to stay alert. We really need such type of technologies. As we have achieved great things with such technology then we can expect to have this technology. Hopefully our car makers will do proper testing and will add some userfriendly aspect so that the technology will perform the best in our car. Sometimes we face problem in our car. If we are not a professional then it is better to check up our car from a professional car repair center and solve out all issues.

>Just like people can reprogram or tamper with aspects of their car's computers to boost horsepower or throttle response, no doubt there will be a market for people to modify the data sent (how fast it's going, etc).

Having seen how fear of hackers has led to draconian laws like the Computer Fraud and Abuse Act, it seems likely we'll have extreme penalties for anyone hacking automaker DRM. The hacking penalty will probably exceed the speeding penalty.
Reply  |  Post Message  |  Messages List  |  Start a Board

So now we can all look forward to having our motor vehicles hacked and 100 car pile ups in addition to our consumer data because anyone paying attention knows that American Big Business is incapable of protecting data of any sort.  See also the numerous data breaches of Target, Neiman Marcus, et al >> http://www.privacyrights.org/data-breach
Reply  |  Post Message  |  Messages List  |  Start a Board

Before anyone tries to do anything quite as sweeping as this, here's something much simpler which might well lay a solid foundation for cars talking to each other. Why not start out by having them talk to traffic signals? If at an intersection where, say, the North-South road has the green light and there are no more cars waiting to go, why not give the 15 cars waiting on East-West that are stuck on the red the OK to move? In other words, dynamic adjustment of the light cycle based on the situation. Not only are the technical problems a whole degree of freedom simpler, but the legal challenges of writing the laws to cover the changes will be simpler, too.

You mention reducing traffic congestion -- there could be a convenience incentive there, where people who consent to V2V controls and certain monitoring can ride in V2V lanes, like the HOV lanes.
Reply  |  Post Message  |  Messages List  |  Start a Board

I'll take the contrarian view, here. No doubt people will resist it, but what about the good it could do?

"...the technology 'has the potential to help drivers avoid or mitigate 70% to 80% of vehicle crashes involving unimpaired drivers, and that could help prevent many thousands of deaths and injuries on our roads every year.'"

For parents of teenage drives, especially, I'm sure they'd welcome this technology.
Reply  |  Post Message  |  Messages List  |  Start a Board

Just like people can reprogram or tamper with aspects of their car's computers to boost horsepower or throttle response, no doubt there will be a market for people to modify the data sent (how fast it's going, etc).

The other bigger real aspect I see is it will car sales. How?

Why would anyone buy a car that can go over 55mph if everyime you do, it sends you a ticket? You will in one fell swoop, kill any reason to buy a car over $10,000. Don't think Detroit, or Europe, or Asia will be too thrilled.
Reply  |  Post Message  |  Messages List  |  Start a Board

Persistent monitoring strikes me as really intrusive, and I'm glad Tom mentioned potential uses of this data, including automatic fines or changes in insurance rates. I wonder if consumers will have the option to switch off these kinds of functions.
Reply  |  Post Message  |  Messages List  |  Start a Board
Editors' Choice
Hot Topics