Finally, An iPad With A Keyboard! - InformationWeek

If only iPads had keyboards, preferably built into a case. The ZAGGfolio Apple iPad 3 keyboard case is a good product, but iPad apps aren't designed to use a keyboard. Here's why.

I recently suggested that the computer of the near future is a tablet with a keyboard case. Once you proclaim something as possibly near perfect, you have to try it. So I tried my new third-generation iPad with a ZAGGfolio Apple iPad 3 keyboard case.

Although this is a review of the ZAGGfolio, I'm more concerned with the general usefulness of an iPad with a keyboard. The point of my earlier column was that there is a troublesome gap between the interfaces and hardware of touch and conventional apps. I thought the iPad with a keyboard could be the happy medium.

Unfortunately, we're not there yet.

The ZAGG case itself is pretty slick. The keyboard is not an integral part of it and can be removed, which adds to the versatility of the product. It comes in many colors and polyurethane and leather designs (the one I tested was called carbon fiber. Is it actually carbon fiber? The ZAGG site says: "The outer polyurethane case was created with a stylish carbon fiber design and a durable microfiber lining." I think that means "no.") 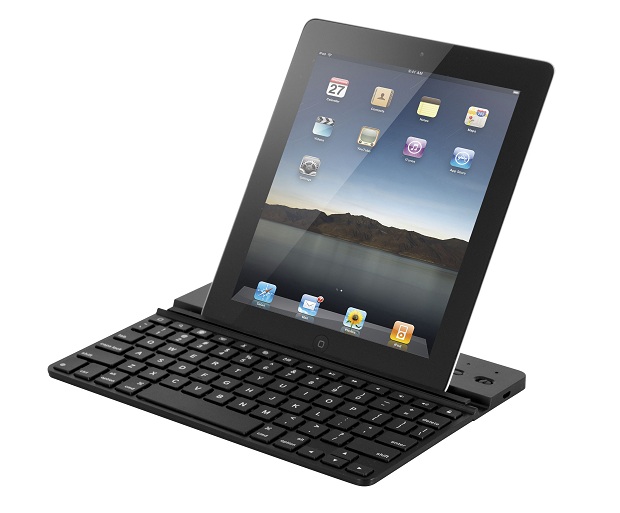 The case has cut-outs for all iPad's buttons and ports except the micro-USB charging port for the keyboard. That port is covered. This is inconvenient, but ZAGG claims very long battery life on the keyboard, on the order of months, so perhaps it's not a big deal.

The keyboard is placed in one half of the case and the iPad goes in the other. The iPad fits and leans in a slot in the keyboard above the keys at about a 25 degree angle (alas, I haven't owned a protractor since high school). You can stand the iPad in the slot either in landscape or portrait mode. The case snaps closed with a locking clip. When closed it measures 9.8" by 7.6" by 0.9" and weighs 19 ounces. Pairing the keyboard and iPad on Bluetooth was simple.

Did I mention that one of the coolest things about the ZAGGfolio is that the keyboard is removable? It bears repeating because pulling the keyboard out might be a more comfortable way to work in some circumstances. Not all iPad keyboard cases can do this.

The keys are a bit cramped, as they probably have to be, but they feel great. They have a deep travel and a springy feel. The layout is standard with a couple of exceptions: The top row contains a series of special iPad keys: the home button, iPad search, slide show, show and hide the iPad keyboard, cut, copy, paste, previous track, play/pause music, next track, volume mute/down/up, and lock. The bottom-left key, where Fn would be on a MacBook, has a key for international keyboard selection (which only works if you have it enabled it in the iPad settings).

It's not clear to me that it makes sense to put all these functions on the keyboard and I wonder if they are in there just because it's possible to do them. Search and lock I can understand, but the others seem redundant or useless. Command-C/X/V still works for copy/cut/paste, and the music functions only work if you're in the music app and you can't switch apps with just the keyboard. The only reason you'd have for launching the soft keyboard is to invoke Siri dictation. 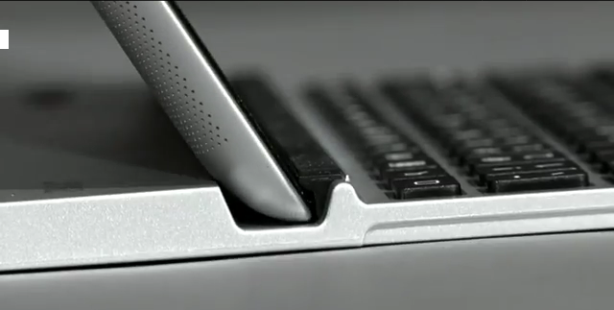 But enough of the ZAGG itself and back to the more general concept of using a keyboard with an iPad. A number of tasks that are a nuisance on an iPad alone become much easier with a keyboard. Passwords, for instance (such as the iTunes password), that must have numerals and mixed case are aggravating on the soft keyboard and much simpler on a real one.

Then there's just the whole issue of typing. It's not practical to enter a lot of data or even do a lot of e-mail responding on an iPad. It's not unbearable, but it's so inferior to a hard keyboard that it quickly gets frustrating. With the ZAGGfolio, typing became about as easy as on a notebook.

The problem with a keyboard on an iPad is that apps aren't designed to take advantage of it. In fact, because typing is so sub-optimal on an iPad (and even worse on an iPhone), apps probably try hard to avoid typing situations. I often wished I had a mouse, such as for cursor placement in text, but there is none and the ZAGG site says that the iPad doesn't accept mouse input. C'est la vie.

On the theory that I might be able to write stories on the iPad with the ZAGGfolio I went a step further and bought a text editor for the iPad that uses DropBox for storage. Elements For Dropbox - A Markdown Notes and Writing App costs $4.99 and the reviews praise the app effusively. As almost all of my writing is for the Web, I do almost all my writing in a text editor directly in HTML. Could I do it on the iPad? 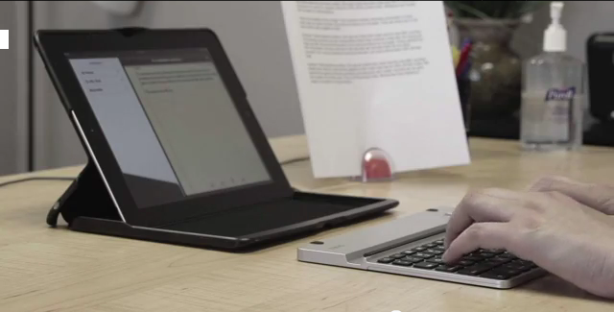 I haven't used Elements enough to judge fairly, but I can say that my style of writing doesn't agree with iOS. I'm constantly switching between programs, perhaps to a program or website I'm writing about. On a PC or Mac this is an Alt-Tab away, but it's cumbersome on iOS.

Keys also don't always work where I hoped they would. In Safari and most apps they don't scroll the view as they do on a PC or Mac. The Delete key only deletes backward and cannot delete forward. This last point turns out to be a feature, not a bug. The iPad itself cannot do a forward delete, just backspace, so there's nothing ZAGG could do.

It all adds up to a overall disappointing experience for me, albeit disappointing based on very high expectations. Yes, I'd rather have a keyboard case than just an iPad and I will continue to use the ZAGGfolio, but it frequently falls short of what I want. I'm sure some would argue that the problem is that I want it to be a notebook computer and it just isn't. Perhaps.

This brings me back to my original premise: that there is a functional gap between touch apps and conventional computer software. The iPad with the ZAGGfolio, or some other keyboard case, is an attempt to bridge that gap. Unfortunately, a keyboard isn't the answer, or at least not all of an answer or even most of one. The apps need to be more flexible and there's little chance of that happening.

The ZAGGfolio is an iPad case with a built-in Bluetooth keyboard. It has many well-designed features--the keyboard is removable and has a great feel. But the layout of the keys is problematic at times. Through no fault of the ZAGGfolio, too many apps don't respond to it as an input device. A ZAGGfolio for the Samsung Galaxy Tab 10.1 is also available.

Your article is right on. I just bought the Clamcase Pro keyboard for my mini ipad. The advertisements said the clamcase pro would allow the mini ipad to operate like a computer. That was music to my ears. I write and I edit and touching the mini ipad screen to edit is a terribly cumbersome and inefficient process for one who writes constantly. I had hoped the clamcase pro would be more efficient. It is not.

Specifically, I assumed the clamcase pro keyboard would have a function that allows one to forward delete the character to the right of the cursor. It does not.  The Apple site gives some instructions for editing. Many of these shortcuts work on the clamcase pro. http://store.apple.com/us/question/answers/product/MC184LL/B/the-one-delete-key-moves-left-is-there-a-single-keystroke-way-to-delete-right-with-this-keyboard/QKTDPPDJD9XPFFUTA. The function I most want, to forward delete, does not work. I have an older Zagg keyboard for the mini. It is not as elegant as the clamcase pro but you can forward delete a character by holding the "fn" key and the "delete" key. This doesn't work on the clamcase pro. Holding the "fn" key and "delete" key simply deletes the character to the left of the cursor, just as the "delete" key alone would do.

The inability to forward delete makes the keyboard of little use in editing. Apple would be well advised to address this for the mini iad. I'm not giving up my laptop PC any time soon.
Reply  |  Post Message  |  Messages List  |  Start a Board
Editors' Choice
Hot Topics