Fairphone is looking to change the dynamics of the smartphone market with its Fairphone 2, a modular, easily repairable Android phone made of recycled materials.

Fairphone, a company dedicated to producing a more sustainable and ethically made smartphone, unveiled new details about its latest model -- the Fairphone 2 -- a modular device made of components that are designed to be easily replaced.

In an effort to improve the durability of an inherently fragile device, Fairphone's engineers designed an outer case that removes the need for a separate back cover or battery door, as well as a rubber rim that wraps around the edge of the glass to protect the display if the phone is dropped.

"By making the case an integral part of the phone, we could make the phone safer from accidents and drops without requiring an additional protective case," Olivier Hebert, Fairphone's chief technology officer, explained in a June 16 blog post. "This was possible while maintaining an overall consistent industrial design that wouldn't cause the phone to feel like a ruggedized device."

The company performed a series of tests to ensure the robustness of the design, including dropping the phone on concrete a number of times on all six surfaces from a height of six feet. The design also uses a number of seals and gaskets to keep dust and water out of the phone.

Another main consideration the Fairphone team was ease of repair, which resulted in a smartphone that can be fixed by its owner without advanced technical knowledge. 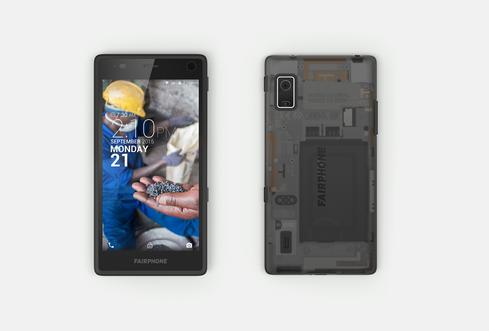 First there is the external case with a number of different variations. There is also a replaceable battery pack. However, one of the most important parts is the transceiver, which is the core of the system and includes the main chipset, memory, flash storage, modem, radios, antennas, the SIMs and MicroSD card holders, motion sensors, and power management.

Other components include the receiver unit, including the headset connector, front-facing camera, noise-cancelling microphone, ambient light and proximity sensor, the notification LED, the rear camera unit with flash, the speaker unit with vibration mechanism, the main microphone with its USB connector, and the display unit, including the main LCD module, touch-sensing driver, and a Corning Gorilla Glass 3 lens.

The Fairphone 2 runs Android 5.1 (Lollipop) and uses Qualcomm's Snapdragon 801 processor. On the site, the company lists the phone as costing 525 Euros ($591) with a full cost breakdown to come later.

"It is important to note that all of the electromechanical components are easily replaceable -- none are soldered, apart from the microphones, which need to be," Hebert wrote in the company blog post. "The buttons, which are part of the transceiver, sit on flexible printed circuits that are spring-connected to the main board. The units themselves are also built in a modular way to enable refurbishment."

Hebert also drew attention to the fact that many of the phone's components are made from recycled materials. He said the company would be publishing more information about the phone in the coming months, noting pre-orders would start later this summer.

The company, which is based in Amsterdam and is supported by the Waag Society, a foundation in the Netherlands that fosters experimentation with new technologies, art, and culture, has already sold 60,000 Fairphones since it was registered as an independent social enterprise in 2013.

Nathan Eddy is a freelance writer for InformationWeek. He has written for Popular Mechanics, Sales & Marketing Management Magazine, FierceMarkets, and CRN, among others. In 2012 he made his first documentary film, The Absent Column. He currently lives in Berlin. View Full Bio
We welcome your comments on this topic on our social media channels, or [contact us directly] with questions about the site.
Comment  |
Email This  |
Print  |
RSS
More Insights
Webcasts
Bolstering Your Enterprise Cyber Risk Assessment
Disaster Recovery/Business Continuity in the New Normal
More Webcasts
White Papers
Why You're Wrong About Operationalizing AI
Best Practices Guide to Containers/ Kubernetes Security
More White Papers
Reports
The State of Malware Threats
Future Proofing Your Network for 5G
More Reports