Facebook Home gives Android devices a new type of social wrapper that's not quite an OS. Take a closer look at what it does to your smartphone. 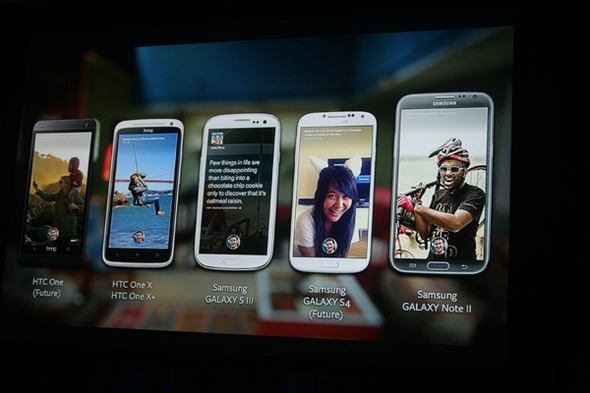 Facebook isn't building its own phone or its own operating system. It isn't even bothering to fork Android, the way Amazon did. It's too smart for that. Instead, it's trying to reprogram Android to serve a new master. Google made Android open, so Facebook decided to move on in and make itself at home.

On April 12, the company plans to release Facebook Home, a suite of mobile apps that make social interaction a more prominent part of the user experience. "We're not building a phone and we're not building an operating system but we're also building something that's a whole lot deeper than an ordinary app," said CEO Mark Zuckerberg in a press conference at Facebook's Menlo Park, Calif., headquarters.

Facebook Home's main feature is a service called Cover Feed that will appear on lock screens of Android devices where it has been installed. A variation on the company's successful News Feed, Cover Feed will become the first thing seen on Facebook-colonized Android phones, and it's likely to keep users involved and interacting with Facebook's other mobile social apps, which include Notifications, Chat Heads, App Launcher and Instagram.

At some point, Facebook Home apps will deliver ads and contribute to the company's bottom line. But not immediately, according to Zuckerberg.

Zuckerberg made it sound as if Android's openness was an invitation for his company's Home Screen invasion. But Google, Android's keeper, isn't likely to be enthusiastic about its new, possibly permanent guest. Facebook already draws more attention than any other mobile activity besides gaming. By taking over Android's interface, Facebook stands to command even more user focus.

Facebook has partnered with mobile handset maker HTC and mobile carrier AT&T to have Facebook Home preloaded on the forthcoming HTC First. The phone will be available for $99 from AT&T on the same day that Facebook Home can be downloaded from the Google Play store.

Facebook says Home will be made available on other phones, including the HTC One, One X and One X+ and the Samsung GALAXY S III, Note II, and S4. Broader Android compatibility and availability has yet to be disclosed.

But does anyone really want to elevate Facebook from an app to an omnipresent communications framework?

Jack E. Gold, a research analyst for Gold Associates, expressed skepticism in an email. "The fundamental question to me is, will users want to essentially spend all of their time in this one uber app?" he said. "I'm sure those that spend 90% of their time in Facebook will find it appealing. But I believe that is a small minority. What Facebook sees as Home, others might see as a jail -- too much control and too many boundaries for them, especially if they are only occasional users of Facebook."

Dig into our slideshow to have a look around your potential new Facebook Home.

Thanks for the photos. Any descriptions to go with them?
Reply  |  Post Message  |  Messages List  |  Start a Board
Editors' Choice
Hot Topics