From depth-sensing cameras to light-but-rugged designs, Dell sees a future for tablets in the enterprise.

"Pick up your device," says Neil Hand, VP of Dell's tablet group. I do as instructed, removing my iPhone, which I've been using to record the conversation, from the tabletop.

Hand immediately hammers the tablet he's holding -- one of Dell's new Venue 11 Pro 7000 series two-in-ones -- against the table, striking with gusto that evokes the superhero Thor dispatching some villain in the movies. Heads turn as a succession of loud thwacks! cuts through the air in the Dell World press lounge.

"I knew that was you," one of the turned heads says to Hand.

"Can you guys keep it down?" another exec jokes.

"I have a passion for what I do!" Hand responds. This clearly isn't the first time today that he's subjected his Venue 11 to abuse.

Hand is describing the company's philosophy toward designing tablets. Like all OEMs that make Windows tablets, Dell lives in the iPad's shadow. But Hand says Dell is making a mark with smart decisions such as durable designs -- a point his tablet-banging is meant to demonstrate.

"I always ask if anyone has a personal tablet they'd like to run that same test with," he says after he finishes knocking the Venue 11 against the table. "Not a single person has ever said yes."

Windows OEMs have made this case before, that consumer-oriented devices such as iPads aren't built to withstand day-to-day use by professionals in the field. Apple's iPad sales have dropped the last few quarters, but the devices still constitute the single most popular and profitable line of tablets, so it's not clear if the durability sales pitch is more than a niche differentiator. But Hand is enthusiastic about many other qualities of his devices.

Hand promises that Dell's tablets will work as well after several years as they do on day one, for example. "Four years might be pushing it in some cases," he says, "But I say three years." 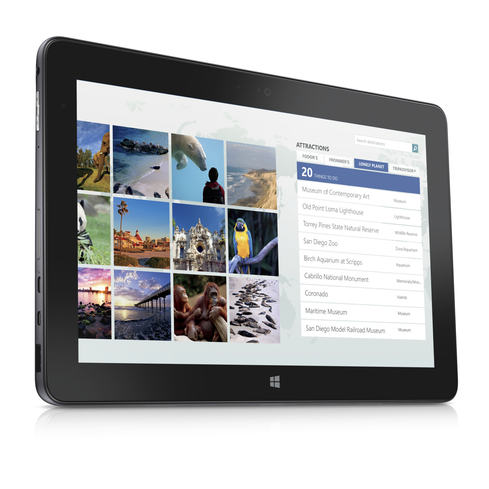 Dell's Venue 11 Pro 7000 is one of the first two-in-ones with Intel's new power-efficient Core M processors.

Why is four years pushing it? Because the latest Windows tablets are so thin and light, they're more likely than traditional laptops to be carried around, which means that daily wear could eventually add up, Hand says. His observation aligns with my anecdotal experience; I find Microsoft's Surface Pro 3 a bit cramped and ergonomically limited compared to my three-year-old Lenovo ThinkPad, for example, but because the Pro 3 is so much more portable, it's the device I usually grab for on-the-go work.

But Hand thinks Dell's devices have a leg up on Windows stablemates such as the Surface. He boasts that when Dell launched the original Venue 11 Pro last year, he told customers that the tablet's accessories, including various attachable keyboards and a docking station, would be compatible with at least the next two generations of devices. True to his word, this year's follow-up model -- the Venue 11 Pro 7000 Hand has just knocked against the table -- supports all of last year's gear. In comparison, you can use an older TypeCover keyboard on Microsoft's Surface Pro 3, but because the newest Surface is bigger than older models you'll have to buy a new keyboard to get an optimal experience.

Dell's efforts are a compelling value proposition for enterprises, Hand argues. The devices are cost-effective due not only to their durability, but also their modularity, given that replacing a keyboard doesn't require replacing the rest of the machine and vice versa. Moreover, it's not just that Dell's tablets are tough, he continues; they also hit the sweet spot between productivity and portability.

This smacks a bit of one of Windows OEMs' other favorite arguments: That because two-in-one devices such as the Venue 11 Pro combine laptop and tablet in one package, they can replace both a MacBook and an iPad. But surprisingly, Hand veers off this route.

In the commercial world, many employees will continue to rely on Windows 7 for the immediate future, he says, conceding that business customers have

It's worth noting that the Venue 11 Pro described in the article isn't one of Dell's special, ultra-rugged models. Hand was suggesting that even their "normal" tablets are quite durable. But for the truly niche audience that needs nearly-indestructible tablets and laptops, Dell has a whole different set of devices, many of which are encased in suitcase-like protective frames.

Is ruggedness a selling point for devices such as the Venue 11 Pro? Everyone who's chimed in on this thread seems a bit skeptical. I understand that skepticism-- as Hand started knocking the Venue against the tablet, it occurred to me that though I've managed to destroy two iPhones, my iPad has absorbed all sorts of drops, bangs and bumps without incident. Despite its allegedly "consumer-grade" construction, in other words, I haven't had a problem-- and I'm sure other people feel similarly, especially if they happen to prefer iOS to Windows or Android. And even if OS preference isn't a big concern, I'm not sure if durability alone makes a Venue more attractive than, say, a Surface or an HP 2-in-1.

All that said, Hand was talking about durability over the long run. A lot of the tablets deployed in the field are under three years old. Hand's argument is that if you buy Dell, you're going to be better enabled to amortize the investment because the devices will continue to be usable for such a long period. It's hard to truly test that theory since there simply aren't many cases in which tablets have already been deployed in the field for three-plus years. I think it's clear that at the consumer level, iPads are durable enough to keep kicking for a long time-- after all, the iPad 2 is still the most ubiquitous iPad. But I'm not sure how the iPads fare after three or four years in a rough professional environment, such as a manufacturing floor, or a heavily-trafficked display in a retail location.
Reply  |  Post Message  |  Messages List  |  Start a Board

I've talked to a number of execs who've put tablets out in the field in very large numbers -- technicians, salespeople, city inspectors -- and I haven't heard much demand for durable tablets. They just aren't seeing big problems with breakage. Are others seeing a demand for rugged tablets? No doubt there will be some environments it's important, but feels like a niche.
Reply  |  Post Message  |  Messages List  |  Start a Board

I guess what he's saying is Dell thinks its tablets are thin enough -- but how thin is thin enough, readers? As for dropping your iPad, get a lifeproof case. It is well worth the $.
Reply  |  Post Message  |  Messages List  |  Start a Board
InformationWeek Is Getting an Upgrade!