Drones can help or harm. Figuring out how to respond to them isn't going to be easy. 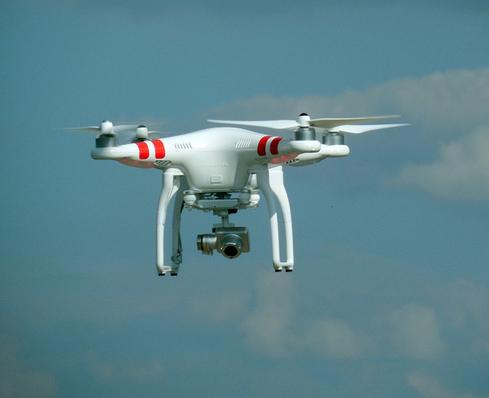 The Boston Athletic Association declared that the entire route of the 2015 Boston Marathon would be a "No Drone Zone."

It advised the public not to operate "any type of drone (unmanned aerial vehicle), including remotely controlled model aircraft, over or near the course, or anywhere within sight of runners or spectators."

Given the terror attack on the race two years earlier, the group's prohibition on drone usage is understandable. But it also offers a reminder that cargo and driver intent determines whether something is a "vehicle" or a "threat," and to the extent that we cannot make that distinction, we can expect problems formulating rules flexible enough to cover either definition.

To enforce the marathon's No Drone Zone, the Boston Police Department worked with DroneShield, a Washington, D.C.-based firm, to provide drone countermeasures.

In a phone interview, Brian Hearing, co-founder of the company, said DroneShield offers a network of acoustic sensors that listen for the sound of nearby drones. It compares detected sounds to unique acoustic signatures in its drone database and issues an alert if it finds a match.

No drones were detected, said Hearing.

Nonetheless, the problems posed by drones are real and will have to be worked out if the drone industry is to thrive to the extent predicted. Last year, the Teal Group said it expects spending on unmanned aerial vehicles (UAV) to nearly double over the next decade, from $6.4 billion annually to $11.5 billion annually. The firm expects the distribution of military and civilian spending to shift from 89% and 11% to 86% and 14% in 10 years.

Hearing said his company provides drone protection to executives and celebrities, who face paparazzi drones, and to prisons, among other customers. The use of drones to carry contraband into prisons has become a significant problem, he said, in the US and particularly in Brazil, Canada, and Hong Kong. Barbed wire fences aren't a barrier to anything that can fly.

News reports suggest that Mexican drug cartels have been using drones to fly drugs across the border at least since 2010 – it's far easier than tunneling. In 2012, the US Drug Enforcement Administration identified about 150 drone crossings. In January, a drone carrying methamphetamine crashed in a parking lot in Tijuana, Mexico, a few miles from the US border.

Last year, the FAA documented 193 drone incidents. These include various close calls between manned aircraft and drones, drones flying in restricted airspace or too high, and drones flying near sports stadiums. Also, there have been a handful of drone-related injuries reported, including a drone carrying mistletoe at a TGI Friday's event last year that reportedly crashed into a woman and left her with minor cuts. This excludes military drones, which do a much more decisive job. The use of drones for military attacks has led to tragic mistakes, including the deaths of civilian hostages in a US drone attack last week on suspected terroritsts in Pakistan.

Yet, Hearing argues that we should be wary of stifling the drone industry with regulation. "You have to weigh all the benefits that drones can do, and the risks of over-regulating them are serious," he said, noting that the people who are willfully breaking the law already aren't going to respond to more laws.

Hearing suggested education for drone pilots could help. But he acknowledged that technical solutions, like software-enforced no-fly zones, have limits.

For example, DJI, maker of the popular Phantom line of drones, recently updated its firmware to observe the FAA's NOTAMS (Notice To Airmen), which imposes flight restrictions. It added a "No-Fly Zone centered on the White House and extending for a 25 kilometer (15.5 mile) radius in all directions."

Relying on drone software to stay legal may still lead to rule violations, Hearing said. And then there's the issue of open source software, which can be easily modified.

"There is no silver bullet here," said Hearing.

But there are guns...

Why are drones scary? Because drones are predicted in movies that way. And most of us have seen drones only in movies. And those visuals are shaping our opinions.

So to make drones more acceptable there need to be a campaign at global level that projects humane, child-friendly, peaceful, wiser use of drones.
Reply  |  Post Message  |  Messages List  |  Start a Board

As long as there are enough sceptics like you and me around ;there will be a sense of balance to the whole Debate on Drones.

drone Tech can be beneficial to Humanity if used with the Right Checks and Balances in place.

Everything else is just another new warfare tool.

Operating a drone by civilians should require a license and must be relegated to appropriate commercial pursuits ONLY. These pursuits should definitely not include spying on celebrities - or anyone else. The exceptions include police with court orders.

Any such system wihout Checks and Balances in place is a recipe for Disaster and murdering of more and more Innocent Lives .


Good Points them all!

Drones have made Militiary/Police/Corporations more trigger-happy(less thinking or Checks and Balances involved in this process).

This needs to change;if it means putting more roadblocks on them (Inspite of the obvious cries of Stifling of Innovation)-So be it.

Too many Innocent LIves are getting lost (over 5000 Innocent Civilians at last count) because of this No-Holds barred carte-blanche for the CIA's Drone Program.

You sound like a massive-massive fan of Excessive US Militiary Intervention Globally.

You are saying its great that the US Militiary can now deploy Drones most of which end up Killing Innocent Civilians in all these countries-Afghanistan,Yemen,etc.

After all,who cares if a few Innocent Civilians get killed via those Trigger Happy Drone pilots?

But what if instead of those Civilians from countries like Afghanistan,Yemen,Syria,etc its American Civilians whose Lives are lost in the Process?

From the same article-

The mishap represents a major blow to the Central Intelligence Agency and its covert drone program in Pakistan, which President Barack Obama embraced and expanded after coming to office in 2009.

The incident also underscores the limits of U.S. intelligence and the risk of unintended consequences in executing a targeted killing program which, according to human rights groups, endangers civilians. U.S. officials say the strikes are needed to combat al Qaeda. To mitigate the risks, officials say the CIA won't launch missiles at a suspected target if they know civilians are present.

The White House has launched a review of the January strike to see if changes are needed to the drone program to avoid similar mistakes. Officials said the program hasn't been curtailed so far in response.

As far as I have gathered (from all Publically available Data);over 5000 Innocent Civilian lives have been lost thanks to Obama's no-holds barred expansion of the Drone Program.


Are you okay with that ?

What if those were 5000 American lives instead which were lost?

On the contrary I would argue that Drones have made the Warmongers in DC to launch more attacks and do more Global Warmongering (with more incalulable damage to Innocent Lives Globally).

When instead the Money would have been better spent elsewhere like helping improving Health Systems worldwide.

Your concerns are well-justified here regarding the impact of Massive Drone Deployment on the world around us.

From the look of things it seems Managing the Burgeoning Global Drone Deployment will end up being similar to either IoT or how we Manage Data Packets Globally(everything will be fully automated).

There will be occasional mishaps but eventually the world will get used to it and take this development also in its stride.

A lot of the problems and potential problems with drones can be alleviated by following the simple maxim that, like guns, drones aren't toys. Operating a drone by civilians should require a license and must be relegated to appropriate commercial pursuits ONLY. These pursuits should definitely not include spying on celebrities - or anyone else. The exceptions include police with court orders. The commentators here have enumerated many great potential and actual uses. The military has been doing great things with them, and the argument against military use because of collateral damage is silly, because the alternatives will cause many, many more deaths.
Reply  |  Post Message  |  Messages List  |  Start a Board

Drones are exciting tools - especially for surveillance.  Being cheap makes them expendable, being flexible means we are just begining to tap the range of role they can perform.  As we talk about regulations and restrictions - we need to appreciate that innovation in use cases is coming from three quarters, military - who build new platforms and capability for covert and attack missions, criminal - with clandestine deliveries over a porous border and finally by the commercial sector - which is applying pioneering platforms into an explosion of opportunities.

Why people and cameras in Tahrir square, just fly a high definition drone over the area.  Why send in humans to survey the latest nuclear meltdown - or look for leaks on the roof, send in the drones.  Why send in teams to scout an Afghan or Pakistani Mountain for insurgents - use a flying stealthed drone with night vision.  So many missions - so realtively cheap and expendable.  Drones are here to stay.  Our debate needs to establish classifications, transmission links, control points, security hardening, instrumentation and sensor packages.

Just heard Chris Anderson, CEO of 3D Robotics, say: apartment dwellers could go to roof, unlock open air box that includes a drone helipad, and retrieve their packages. We can do that today, if we wanted to, he said. What's harder is delivering to individual homes and executing on the right drop point "without hitting the dog." This was at the InformationWeek 100 event in Las Vegas April 27.