12 Open Educational Resources: From Khan to MIT
(click image for slideshow)
Abilene Christian University (ACU) is in the process of porting all its online course content from Blackboard to Pearson's OpenClass, which will be its new standard come the fall semester.

OpenClass is a cloud-based learning management system (LMS) that Pearson has offered for free as a way of promoting the adoption of digital content. Pearson is a major publisher of textbooks, software and multimedia for learning, but the OpenClass default course materials catalog loaded into the system is stocked with popular open educational resources, those free textbooks and other course materials that are challenging the traditional publishing business model.

Kevin Roberts, chief planning and information officer at ACU, a 4,600-student university in Abilene, Texas, said he knows full well there's a profit motive hidden in here somewhere. "It would be a huge red flag in my mind if they said they were doing this just because they love education and want to make the world a better place," he said. "They've been very transparent about it. OpenClass is not limited to Pearson content, but they're saying, 'Hey, the Pearson content will work really, really well in here.'"

[ You say you want a revolution? Open Education: Take Back The Curriculum. ]

OpenClass is still advertised as a beta product, and Roberts admitted ACU is being "a little bit" adventurous," but the university was also an early adopter of Google Apps so this is "familiar territory," he said. Some faculty members have already moved to OpenClass, and they have been impressed by the social and mobile features Pearson packed into the latest version, he said. OpenClass is closely integrated with Google Apps and uses Google+ Hangouts for video chat.

"This is a really different approach. First and foremost, this is fully cloud-based and available at no charge to the university. The decision wasn't based solely on price, but that was part of it," Roberts said. At the same time, "Pearson and OpenClass were able to start with 21st century technologies and think, if we were to build an LMS today without being burdened with having to bring on legacy technologies, what would we do?"

The faculty committee that reviewed the software and compared it with the latest offerings from Blackboard and other LMS vendors concluded OpenClass was in a class by itself. "The recommendation of that committee was unanimous," said Mindy Thompson, an adjunct faculty member who was part of that group and now also serves as a director of instructional design, helping the faculty implement the software.

"The opportunity to partner with a company on a new LMS and have them incorporate our feature suggestions was very attractive to us," Thompson said.

Roberts and Thompson made a point of saying that Blackboard had served the university well for many years. However, with the Blackboard contract about to come up for renewal and OpenClass offering an attractive alternative, ACU decided to reexamine its options.

"At that point, we said let's just look everything," Roberts said. "If we want to stay with Blackboard, that's great -- but let's not fall into that decision, let's make that decision."

In the year since ACU made its decision, OpenClass has continued to introduce significant improvements, reinforcing Thompson's belief that it was the right decision. "We liked the open part of OpenClass. I find it very flexible and user friendly. There are several different ways to approach sharing a course, setting up materials and deciding how you want to teach."

For example, Blackboard dictated the course structure to a great extent by a template that is common to all courses, Thompson said. OpenClass makes it easier for instructors to organize a class however they would like. "For example, we're encouraging faculty to think about flipped classroom, which might mean presenting things in a different order. You might start with the exam, using a competency-based model" and then work backwards to fill in gaps in student knowledge, she said. That doesn't mean every course will take a radical approach, "but the ability to consider doing things a different way is something we really liked," she said.

Having social networking built into the platform also allows students to interact with their classmates and professors in a way that feels very natural, without letting those connections cross over into their personal lives, Thompson said. The use of social networking in instructional design shows a lot of promise, with some early research supporting the idea that it aids learning and retention, she said. 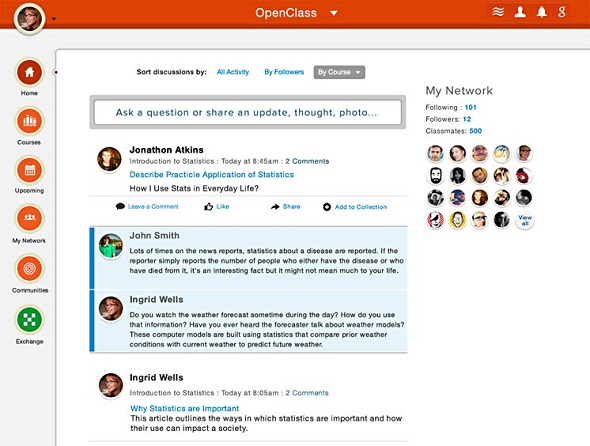 The OpenClass dashboard welcomes students and faculty with a social activity stream.

The central dashboard a student sees after logging in features a social newsfeed, and there's a feed associated with each course that can act as a "just-in-time study group," Thompson said. Instructors can also host online office hours in the feed.

Some courses had been taking advantage of closed Facebook groups for such purposes, but doing so tended to raise awkward questions. Students thought it was weird if a professor asked to become their Facebook friend or felt self-conscious having their instructor as part of the audience for their everyday posts, Thompson said. "At the same time, some professors would say, 'I don't want to be friends with my students on Facebook -- they're my students.' This helps with some of those boundary issues."

Comment  |
Email This  |
Print  |
RSS
More Insights
Webcasts
Zero Trust for a Work-From Home World
Cybersecurity's Next Wave: What You Should Know
More Webcasts
White Papers
Why Add Security to Your Skill Set and How to Do It
New Cybersecurity Paradigm
More White Papers
Reports
Improving Security by Moving Beyond VPN
Enabling Enterprise Resiliency Through Cyberthreat Detection
More Reports