Monday is press day at the Consumer Electronics Show in Las Vegas, a day that's packed with press conferences and other events. LG and Microsoft were two of the first to show off new mobile devices in the early part of the day.

Microsoft announced the Nokia 215, a feature phone targeting first-time users. The device doesn't run Windows Phone. Instead, it relies on the old Series 30+ platform. Despite the low-end operating system, the phone comes packed with an impressive number of applications and services. For example, you'll find Facebook and Facebook Messenger as well as Twitter for staying in touch with others and social networking. Users will be able to reach the outer world via the Opera Mini browser and Bing Search, and the device includes the MSN Weather app. Other apps include an FM radio and MP3 players.

The hardware may be simple, but it does the trick. The Nokia 215 has a 2.4-inch screen and a numerical button pad for dialing numbers. (Remember those?) The phone has support for 3G data networks built in, along with Bluetooth 3.0. It can support memory cards up to 32 GB, and it offers 21 days of standby time. The Nokia 215 will be sold in select markets in the Middle East, Asia, and Europe for the low price of $29.

LG was quick to follow Microsoft with the G Flex 2, its second-generation bendable smartphone. It's been about 15 months since LG showed off the original Flex, and the Flex 2 is an entirely different monster -- in a good way. The G Flex was so large as to be unwieldy, and it had less-than-impressive specs. LG clearly sank a lot of development dollars into creating the bendable screen and battery and thus skimped on other features. The Flex 2 is a flagship-class smartphone that impresses through and through. 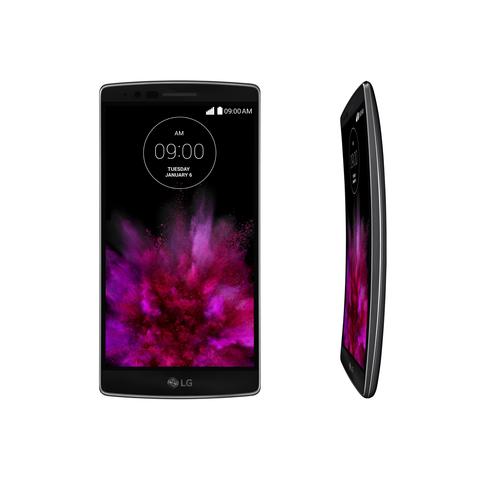 The device has a 5.5-inch 1,080p HD plastic OLED display. According to LG, it has been coated with a material from Corning that mimics the company's Gorilla Glass 3 product, and it is 20% stronger than its predecessor. The back surface of the phone has been improved, too: The original's self-healing material took about three minutes to recover from minor nicks and scratches, but the Flex 2's back cover can heal itself in just 10 seconds. (LG didn't say how quickly it will recover from more serious gouges.)

In terms of specs, the Flex 2 is a monster. It runs a quad-core 2.0GHz Snapdragon 810 processor and will come with 2 or 3 GB of RAM and 16 or 32 GB of internal storage, with support for memory cards up to 2 TB (yes, terabytes). The camera captures 13-megapixel images and includes laser focus and second-generation optical image stabilization. It can record 4K video. The 2.1-megapixel user-facing camera can snag 1,080p HD video, and there's a new tool for taking selfies on board.

AT&T and Sprint were quick to voice support for the LG G Flex 2, though it will probably be sold by T-Mobile and Verizon, too. The phone supports LTE, Bluetooth 4.1, GPS, WiFi, NFC, and QuickCharge technology. As for price, don't expect all this to come cheap.

I am not sure the flex alone would sell me. What is the main appeal for you of flexible form factors, readers?
Reply  |  Post Message  |  Messages List  |  Start a Board
InformationWeek Is Getting an Upgrade!