Canonical's tablet arrives in Q2 to face a challenging market for such devices. But the company says its offering delivers a true tablet experience, along with the full Ubuntu desktop experience.

With the World Mobile Congress approaching later this month, on Thursday Canonical plans to introduce its first tablet, the Aquaris M10 Ubuntu Edition.

The company's timing could be better. Tablet sales have been slipping. According to IDC, tablet shipments declined -- 13.7% year-over-year in Q4 2015. However, the same study found that shipments of so-called detachable tablets, or convertibles, such as the iPad Pro and Microsoft Surface Pro, reached an all-time high.

That may explain why Canonical describes its tablet, made by Spanish hardware partner BQ, as a converged computing device. It offers "a true tablet experience and the full Ubuntu desktop experience," says Canonical.

This is something of a trend in among companies selling mobile computing hardware. Microsoft's Surface Pro 4 is both a tablet and a laptop. Apple's iPad Pro can switch-hit too, with the assistance of the company's Smart Keyboard. Even Google has jumped on the convergence bandwagon with its Android-based Pixel C and keyboard.

A tablet by itself makes a suitable content creation tool for digital artists, but it falls short for text-oriented office work. Tablet makers insist they're making laptop replacements too. 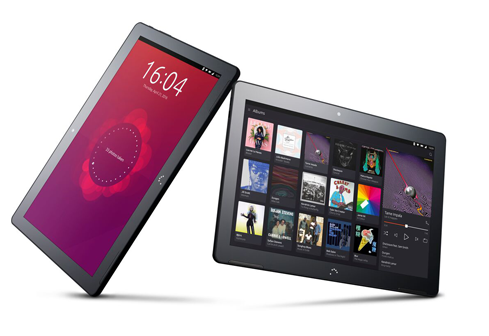 Canonical CEO Jane Silber in a statement insists that the Aquarius M10 software is well-suited for either experience. "This isn't a phone interface stretched to desktop size -- it's the right user experience and interaction model for the given situation," she said. "Also, in terms of applications, we have something no other OS can provide: a single, visual framework and set of tools for applications to run on any type of Ubuntu smart device."

In terms of applications, Canonical says it has hundreds of apps. That's somewhat less than the 1.5 million or more apps in the iOS App Store and the 1.6 million available in Google Play. But the company characterizes the situation as an opportunity for developers to create new applications that work across all Ubuntu interfaces.

Canonical suggests its tablet is well-suited for enterprises because it works with virtual desktop infrastructure and thin client services.

Ubrani, however, sees the app gap as a problem. "There's really no app ecosystem there," he said in a phone interview. He points to the absence of hardware partners other than BQ as a sign of the challenges Canonical faces. Noting that most mobile customers have adopted Android, iOS, or Windows, he said, "Even BlackBerry is switching to Android. I don't think there's a place for a fourth contender."

Thomas Claburn has been writing about business and technology since 1996, for publications such as New Architect, PC Computing, InformationWeek, Salon, Wired, and Ziff Davis Smart Business. Before that, he worked in film and television, having earned a not particularly useful ... View Full Bio
We welcome your comments on this topic on our social media channels, or [contact us directly] with questions about the site.
Comment  |
Email This  |
Print  |
RSS
More Insights
Webcasts
The Failures of Static DLP and How to Protect Against Tomorrow's Email Breaches
Making Cybersecurity Work in Small and Medium-Sized Businesses
More Webcasts
White Papers
Passwordless: The Future of Authentication
Cloud Connectivity -- Your Guide to the Network
More White Papers
Reports
The ROI Of SD-WAN: Not Just A Numbers Game
The Future of Multi-Cloud Networking 2020
More Reports