Most tablets in the enterprise are iPads, but HP, which announced new business tablets this week at Mobile World Congress, still believes Windows slates can carve out a niche.

Windows tablets' market share has been "small to date," said Derek Everett, HP director of worldwide product management for commercial Windows tablets, in an interview. "But we see it as a high-growth area for the next few years."

The ElitePad 1000 G2 and ProPad 600, both of which debuted this week, represent the company's latest attempt to jumpstart that growth.

A replacement for HP's ElitePad 900, the 1000 G2 runs Windows 8.1 Pro and will launch in March with a base price of $739. It features a 10.1 inch, 16:10 scratch-resistant screen with 1920x1200 pixel resolution. HP says the ElitePad 1000's screen is brighter than the current model's and supports a wider range of viewing angles. These traits -- along with its sturdy, military-grade, machined aluminum body -- make it potentially well suited for field work.

[Is Windows 8.1 about to get better for desktop users? Read Microsoft Confirms Windows 8.1, Windows Phone 8 Updates.]

The ElitePad 1000 also improves on the 900 by adding LTE connectivity and, thanks to its Intel Bay Trail quad-core processor, 64 bit support. It supports pen input, includes a 2 MP front-facing camera for video chats, and an 8 MP rear-facing camera. The 1000 will be available in both 64 and 128 GB configurations, although a microSD card slot offers additional space. At a little over 9 mm thick and 1.5 pounds, it should be easy to handle.

The ProPad 600, meanwhile, is intended as a "step down" from the ElitePad, said Everett, who added that HP believes there's a demand for affordable commercial tablets. HP hasn't yet disclosed pricing for the device, which will ship in April, but given that HP needs to differentiate the ProPad from its $739 stablemate, an introductory cost well south of $700 seems certain. 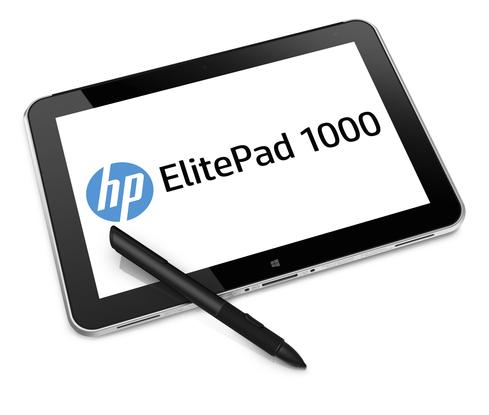 HP's Smart Jackets include the Expansion Jacket, which extends the connected device's battery life, and the Productivity Jacket, which includes a built-in keyboard and USB ports. HP also offers a docking station that allows ElitePads to connect to an external monitor and function like desktops. At Mobile World Congress, the company showed off new accessories for point-of-sale applications.

Everett said HP "doesn't necessarily see [ElitePads] as PC replacements, but for light content creation, they bridge the gap between notebooks and tablets."

The size of the market represented by this gap is, of course, the dilemma facing HP and other Windows tablet vendors. The enterprise tablet market is "going to be mixed," Everett stated. "We all know there is a lot of BYOD out there."

"IT departments value the Windows 8-based tablet platform," he continued, stating that HP's Windows 8 customers choose the platform for app compatibility, security, and manageability.

Those appeals are important but so far have translated into only a niche segment of the field. The research firm IDC said in December that Windows tablets accounted for 3.4% of shipments in 2013, compared to 35% from iPads and 60.8% from Android slates. IDC projects that by 2017, Windows tablets will claim 10.2% of the market.

For now, HP sees Windows tablets appealing to certain users. "There is no 'one size fits all' solution for business tablets," said Everett. "Some people are going from a desk to conference rooms all day; some people are traveling a lot. Different needs require different [accessories] tailored to end-user need."

When asked if HP customers purchase multiple Smart Jackets so a single tablet can be used in multiple ways, Everett said that, anecdotally, he doesn't see more than one Jacket per device. He qualified, however, that Jackets and docking stations sometimes are used by people who need to work both at a desk and on the go.

Michael Endler joined InformationWeek as an associate editor in 2012. He previously worked in talent representation in the entertainment industry, as a freelance copywriter and photojournalist, and as a teacher. Michael earned a BA in English from Stanford University in 2005 ... View Full Bio
We welcome your comments on this topic on our social media channels, or [contact us directly] with questions about the site.
Comment  |
Email This  |
Print  |
RSS
More Insights
Webcasts
Nip Ransomware in the FUD: Detecting Attacks Pre-Encryption
Strategies for Success with Digital Transformation
More Webcasts
White Papers
Sunburst: Impact and Timeline
451 Cloud Confidence Report
More White Papers
Reports
Are We Cyber-Resilient? The Key Question Every Organization Must Answer
The State of Cloud Computing - Fall 2020
More Reports

I have been looking for a quality WINDOWS 8.1 tablet for a while now and was pleasantly surprised when I found this tablet. I use an ipad for my work and need sd card to hold my surgical techniques because often I can't get a wifi connection so I can't rely on cloud. I purchased a Surface pro2 but was unhappy with how heavy, thick, and slippery it is. It just doesn't feel good in the hand. This product makes sense to me, with its excellent accessories and it's sdxc with up to 1T of additional storage. I have a windows Lumia 1020 and recently Apple made an update that will no longer support windows phone. For the first time, I will finally have the same operating system for all my devices, phone, tablet and pc. I love windows 8.1 modern UI and find real brilliance in its live tiles. Finally an operating system that can provide information that's relevant without having to open a program. This new advanced Windows device is very exciting.
Reply  |  Post Message  |  Messages List  |  Start a Board

Unless HP is going to get into enterprise tablet management software tools, I don't see how the hardware that HP (or any other vendor) makes is going to impact or jumpstart anything.  Even on the pure hardware front, what dazzling innovation have we seen from HP in recent years?
Reply  |  Post Message  |  Messages List  |  Start a Board

Perhaps companies can charge for premium keyboards accessories. The HP "productivity jacket" provides not only a full keyboard but also a variety of ports. That's worth something extra. But I think a basic keyboard (maybe like the Surface's Touch Cover) needs to be tossed in with the device. The 8-inch tablets are a different story, but for the larger ones, it makes no sense to sell keyboards separately. I suspect the tactic does more to discourage device sales than to encourage accessory sales.
Reply  |  Post Message  |  Messages List  |  Start a Board

I think Chris is correct re the price point. less than $700 still sounds a bit high. and what does the "productivity jacket" cost?
Reply  |  Post Message  |  Messages List  |  Start a Board

I'm not talking about the "how was the support you just received" survey. I'm talking about, "ok, here we've got a basic tablet. Let's ask industries X, Y and Z if they plan on using tablets for anything, and what would they like to see built into the tablet that would really be helpful to them."

One thing I've noticed is that vendors "think" people will buy this tablet or that tablet design, sometimes based on "expert opinion/projections" (usually very broad, like in this article re: Windows use), sometimes based on who knows what. Whatever happened to ASKING the potential customers what they need & delivering that? Take the guesswork out of it!

The Dish network example seems to illustrate this. The techs are complaining about not being able to read the screens in daylight, etc. Had this field been surveyed by any vendor, this could have been identified in advance and they could manufacture a (ph/t)ablet ideally suited to their working environment, maximizing return on investment. I'm sure there are other companies besides Dish that could use this same technology to their advantage. Lots of potential here.

Broaden the survey to other markets, and you start to get an idea of what common features are needed in every unit (obvious examples include email access, browser access) vs. some more specialized requirements (e.g., the ruggedized aluminum casing HP is offering in their 1000 series in this article would work well for outdoor/industrial environment use; not sure if the size is too bulky though - an idea for a pilot!)

I'm not Marketing. But I can take this from a consumer's point of view, who all too often is frustrated at not being able to find the right device because every option out there is unsuitable because they are missing one or another critical function.
Reply  |  Post Message  |  Messages List  |  Start a Board

Thanks for the perspective, AustinIT. You bring up some great examples-- screens suited for outdoor viewing are often a necessity if you're working in the field, for example.
Reply  |  Post Message  |  Messages List  |  Start a Board

I recently had Dish installed at my home. The tech was using the Galaxy you mentioned. Said that he and many of his fellow techs hated the Galaxy for a variety of reasons including slow performance and hard to read screens in bright light. Said the Otter box was no guarantee to prevent damage which regularly took out the tabs.

Bottom line is that low end consumer tech in field work is not necessarily a good plan if it prevents the job from getting done either efficiently - or not at all.
Reply  |  Post Message  |  Messages List  |  Start a Board

I hadn't heard about the Dish use of Otter boxes, but that makes sense. With iPads accounting for more than 90% of enterprise tablets, it stands to reason that Otter boxes and similar-grade protective cases are being widely used.

Any readers out there have a need for legitimately ruggedized tablets, instead of the consumer-grade hardware and accessories?
Reply  |  Post Message  |  Messages List  |  Start a Board

The consumer appeal often holds true when those tablets leave the office, too, Michael. Dish Network gave standard 5-inch Galaxy phablets 15,000 of its field techs who do installs and repairs, and they just put them in standard Otter boxes protection -- only modification is the box is in Dish brand red.
Reply  |  Post Message  |  Messages List  |  Start a Board

I think you're bringing up a good point, Chris. Ruggedized tablets and special accessories enable certain use cases but don't necessarily offer wide-ranging appeal. I think that's one reason enterprise-oriented Windows tablets have been modestly received; for particular use cases, they might be the best bet, but for general tablet use in the office, it's often fine to deploy consumer hardware (or to just encourage BYOD or COPE programs) with access to a few specific apps.
Reply  |  Post Message  |  Messages List  |  Start a Board
Page 1 / 2   >   >>
Editors' Choice
Hot Topics