Creator of the JavaScript programming language and former CEO of Firefox maker Mozilla Brendan Eich introduced the Brave browser, which he sees as a way to broker peace between advertisers and ad blockers.

Brendan Eich believes he can fix the Web. As the inventor of JavaScript, he's perhaps better prepared to do so than most. His tool for the task is a new open source Web browser called Brave, released to developers on Wednesday.

Eich previously presided over Mozilla, maker of the widely used Firefox open source browser and the company that, some would say, saved the Web a decade ago from Microsoft's disinterest in advancing Web standards.

The Web of course is under constant threat. Anytime there's an open, level-playing field, toll gates and walls get built as fast as the defenders of technical freedom can tear them down. Eich acknowledges this in his launch announcement, but he considers the present threat more serious. "Some call it advertising, others privacy," he explains.

For many, advertising has turned the Web into hostile territory. A significant and growing number of people have come to reject online advertising, which funds much of the content posted online, because it slows websites, annoys, and comes at the cost of privacy.

PageFair, a consultancy that helps marketers deal with ad blocking, and Adobe, a maker of marketing and analytics software, released a report last August that estimated ad blocking cost publishers nearly $22 billion in 2015. Ad blocking grew globally by 41% from Q2 2014 to Q2 2015, according to the report. In the US, the report found 45 million monthly active users of ad blocking software during Q2 2015, an increase of 48% from a year earlier.

It's a trend that has caused considerable alarm among the many businesses that depend on ad revenue and on the effectiveness of online ads. 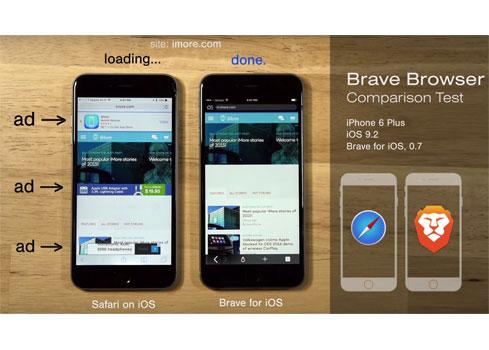 To make matters worse for publishers, Apple introduced an ad blocking API -- which it refers to as "content blocking" -- in iOS 9. That means mobile users on both Android and iOS have access to ad blocking options, just as desktop computer users do.

Advertising technology companies have been aware of the problem for years and many understand that the excesses of legitimate advertisers and the predation of cybercriminals play a part in the public's growing desire to block online ads. They do their best to reassure people that online ads are safe. For example, Google published a post on Thursday titled "How We Fought Bad Ads in 2015" that recounted the company's efforts to police is advertising ecosystem. But there's no way to do so without underscoring the toxic side of online ads.

Eich argues that because the Web needs ads for financial support, and because advertisers are going to try to track Internet users, change must occur in the browser. He wants to avert a war between advertisers and Internet users by providing a browser that blocks ad tracking technology while also providing limited anonymous ad delivery.

Brave, he explains, will block analytics scripts, tracking pixels, and other ad metrics code. It will insert replacement ads, he says, in "only in a few standard-sized spaces." Those ads will be targeted by "browser-side intent signals," without any persistent tracking mechanism. Meet the new ads, same as the old ads, but better behaved and perhaps better performing.

Eich's plan to bridge the divide between advertiser and consumer is a construction project other companies have undertaken. Eyeo GmbH, for example, sells advertisers access to those who block ads with its Adblock Plus software through its Acceptable Ads program, an approach that many in the ad industry deride as a protection racket.

But Brave Software contends its approach differs, even as it acknowledges that it uses some of the same filters to block known malicious domains. The company says it doesn't demand annual fees from advertisers to whitelist their ads and their tracking code. Instead of pay-to-play access, it aims to provide its own anonymized system for delivering ads in moderation, for targeting them, and for assessing their effectiveness. To save the Web's revenue, Brave aims to replace advertising's sprawling surveillance state with an ad system of its own that responds to users without compromising their privacy.

The Brave browser will, at the user's discretion, block ads and replace them in a few placeholder spots with ads from agencies and ad partners. It also intends to provide advertisers with targeting assistance without revealing personal data, in the hope of delivering better revenue and response rates.

In a blog post analyzing Eich's plan, Andreas Gal, former CTO of Mozilla, describes Brave thusly: "It's like a speed limit for advertisement on the Web, with the goal to restore balance and give sites a fair way to monetize while giving the user control through the [browser]."

All that's left is for advertisers to embrace Brave's limitations.

Thomas Claburn has been writing about business and technology since 1996, for publications such as New Architect, PC Computing, InformationWeek, Salon, Wired, and Ziff Davis Smart Business. Before that, he worked in film and television, having earned a not particularly useful ... View Full Bio
We welcome your comments on this topic on our social media channels, or [contact us directly] with questions about the site.
Comment  |
Email This  |
Print  |
RSS
More Insights
Webcasts
Protecting Your Enterprise's Intellectual Property
Building the SOC of the Future: Next-Generation Security Operations
More Webcasts
White Papers
Two-Factor Evaluation Guide
Universal Internet Connectivity: Reality or Myth?
More White Papers
Reports
Special Report: Edge Computing: An IT Platform for the New Enterprise
Special Report: Understanding Your Cyber Attackers
More Reports

Nice development. But. For Brave to make an impact thousands, if not millions, have to download it. I doubt if people would leave Firefox and Chrome to move to Brave.
Reply  |  Post Message  |  Messages List  |  Start a Board
Editors' Choice
Hot Topics