50%
Tweet
BlackBerry 10 — not just the phones, but the BlackBerry Enterprise Server 10 software — will make or break the former smartphone giant. BYTE obtained an BlackBerry Z10 for evaluation. We haven't yet tested the most interesting enterprise features, but some features of the phone, especially the predictive soft keyboard, have already won us over. 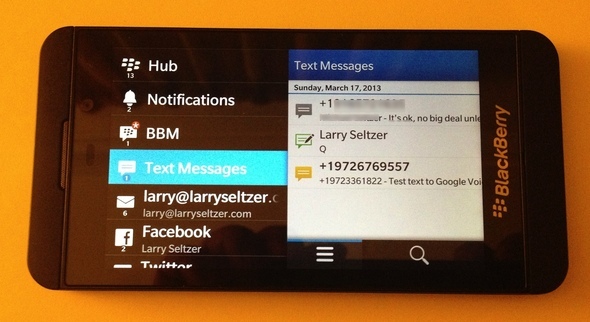 I haven't had long with my BlackBerry Z10, but it has made a good first impression. Not a perfect impression, but there's at least one feature I downright love — the keyboard. But there's a lot more that's new.

The Z10 and the Q10 (a model with the famous BlackBerry physical keyboard, not yet available) are important phones. After years of market decline and substantial delays in this new generation, the fate of the company probably rests on how these specific phones are received. BlackBerry, formerly known as RIM, has been reporting enthusiastic reception among customers but, honestly, what would you expect them to say? I do believe that enterprise IT will be enthusiastic about BlackBerry 10 for reasons I've gone into in detail previously.

The physical characteristics of the phone itself (more about these in a subsequent image) are good, not outstanding. It's a bit on the physically large size: a bit taller, wider and thicker than the iPhone 5. It's a bit heavier too, but far from the heaviest phone I've tested recently. The Z10 is very close to the dimensions and weight of the Samsung Galaxy S III and that phone has been well-received.

It's the software that makes the BlackBerry different. A big part of that is the keyboard, but pictured here is the BlackBerry Hub, a messaging/notification center that consolidates just about anything of interest: emails, hardware and OS notifications like software updates, SMS/MMS text messages, BlackBerry Messenger (BBM) messages, updates from Twitter, LinkedIn, Facebook and, of course, phone calls. You can, from any app, "peek" into the Hub, overlaying it partly on the current app, to see if there's anything worth pursuing. This is one of the features that strikes me as likely to enhance productivity of users who become proficient with the phone, relative to expert users of other phone operating systems.

Other BB10 features are aimed at productivity. The interface is heavily gesture-oriented and you *need* to internalize these gestures in order to use the device effectively. You need to know when to swipe up from the bottom and then right, or swipe down from the top. Once you learn these, everything is easy. Before you learn them, everything is confusing. Like Windows 8, BlackBerry 10 may suffer from a confused first impression by those who don't spend a few minutes learning some key interface techniques.

I haven't yet had a chance to test what I believe to be the most significant feature of BlackBerry 10: Balance. Balance is a software segregation of business and work functions. The idea is to protect both. Users don't want IT administrators nosing around in and possibly wiping their personal data or telling them what apps they can and can't run. Administrators don't want to be doing those things either, but they do have to protect the company apps and data from compromise. Balance keeps the two separate. In a subsequent story I'll describe test results of it.