BlackBerry With Android: Would You Buy One? - InformationWeek

The very idea smacks of desperation, and yet it almost makes sense. BlackBerry might make an Android smartphone, according to Reuters, and it will include a physical keyboard. The real question is, can such a phone make any sort of difference for the beleaguered BlackBerry this point?

The trials and tribulations of BlackBerry are well catalogued by now. It was the market leader for years, crashed hard after the iPhone and Android arrived, attempted a rebirth with BB10 in 2013, attempted another rebirth in 2014, and is now more or less out of juice when it comes to selling smartphones. What could possibly be next? Join those who beat you? Maybe.

BlackBerry is reportedly working on a new phone that will run Google's Android operating system rather than its own BlackBerry platform. The device is said to be a slider -- a handset that includes a large screen and a slide-out keyboard for pecking out emails and messages. The anonymous sources cited by Reuters didn't provide any real details about the phone.

[Be wary. Millennials And Smartphone Apps: Your Security Nightmare.]

Sliders mostly went the way of the dodo years ago, because they add bulk and weight to smartphones. BlackBerry actually made a slider called the Torch back in 2011. The company thinks it can appeal to those who want access to hundreds of thousands of apps, but also prefer a real keyboard. (One of BlackBerry 10's core weaknesses is the lack of apps.) 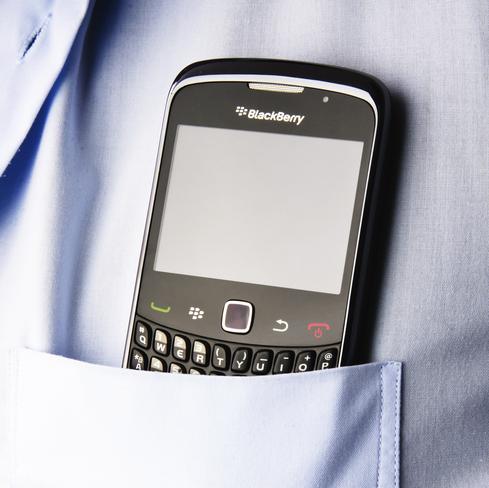 CEO John Chen has made it his mission to reform the company around BES, which lets businesses control employee smartphones. Android is a key part of this strategy -- and it has to be. Android handsets account for more than 80% of sales globally. BlackBerry would be insane to ignore Android. That's why BES12 can manage Android handsets and iOS devices in addition to BlackBerry's smartphones.

BlackBerry apparently believes offering its own Android handset will prove to IT managers that it is serious about controlling Android devices through BES. In order to do that, the Android handset in question will include BlackBerry's patented security software.

The problem for BlackBerry? Samsung already offers flagship smartphones with BlackBerry's security software onboard. Does the company really think it can convince people to buy a bulky, awkward slider when they can get a sleek and powerful Galaxy S? Moreover, BlackBerry has actively reduced the number of employees it has building handsets. The company recently laid off an unknown number of smartphone designers and engineers. Indeed, it seems a moonshot at best, even if the Android phone is meant to help goose BES sales.

The company didn't shoot down Reuters' report, but it made clear its stance on BlackBerry 10.

"We don't comment on rumors and speculation, but we remain committed to the BlackBerry 10 operating system, which provides security and productivity benefits that are unmatched," said BlackBerry.

BlackBerry's Android smartphone may arrive in the fall.

Eric is a freelance writer for InformationWeek specializing in mobile technologies. View Full Bio
We welcome your comments on this topic on our social media channels, or [contact us directly] with questions about the site.
Comment  |
Email This  |
Print  |
RSS
More Insights
Webcasts
The Best Ways to Stop Malware and Ransomware That No One Else Will Tell You
Effective Cyber Risk Assessment and Measurement
More Webcasts
White Papers
2020 Gartner Market Guide for Network Detection & Response
How You Can Evaluate Your Org's Cybersecurity Readiness
More White Papers
Reports
IT Automation Transforms Network Management
State of Endpoint Security: How Enterprises Are Managing Endpoint Security Threats
More Reports

Producing a new BlackBerry smartphone using Android would be a major mistake on the part of BlackBerry because the Version 10 operating system running on the Z10, Z30, and beyond smartphones is the easiest smartphone operating system available with or without full integration with BBM.
Reply  |  Post Message  |  Messages List  |  Start a Board

Sad on an emotional level, intriguing on a business level. I love BES and I have really enjoyed BlackBerry 10 but they can't seem to get the message to stick. Security and the keyboard are key here, especially now that they won the infringement case against the iPhone keyboard from Ryan S. I'm very sceptical as so anything with Google but that's again more of an emotional statement as I havn't personally compared all business practices of iPhone and Google.  So long as they don't compromise the security and the devices is as light and easy to use as the Passport and new BlackBerry devices I would be willing to consider it but if I had a choice I'd saty with the BlackBerry device.
Reply  |  Post Message  |  Messages List  |  Start a Board

I actually love the idea. The only thing I ever liked about BB was the keyboard, I would get one.
Reply  |  Post Message  |  Messages List  |  Start a Board

In my opinion, Blackberry devices are geared toward business and productivity while smart phones are geared more toward mobile entertainment and web browsing. If both come together it will definitely become a good product.
Reply  |  Post Message  |  Messages List  |  Start a Board

This is amazing. I like the features of the blackberry phone. If it creates a smartphone with android it will definitely have a good market.
Reply  |  Post Message  |  Messages List  |  Start a Board

I think it is an interested gamble at this time.  I do not see what other choice they have.  They have tried many things on their own and it is only making them dig a deeper hole than they are now.  It is like today's phones.  There is still people that prefer a flip phone over a smartphone.
Reply  |  Post Message  |  Messages List  |  Start a Board

People still like keyboards, and as long as there is still a phone available with one I think people will buy it. As for Android, I think it makes sense to adopt the OS for BlackBerry. I mean, what other OS is really out there at this point?
Reply  |  Post Message  |  Messages List  |  Start a Board

they designed a computer from scratch (well, they've been designing it , abandonning it , reviving it, etc etc , for a decade or more). The've decided to outsmart the americans. They're going to have some chinese factory build it.


Funny story ... the chinese are just as enthusiastic about hacking anything in sight as the americans are. It just doesn't make the news as often.  How much did the chinese pay Putin to make this monumentally bad choice ? Vladimere , really. Come on. And you an ex-Intelligence agent and all. That's just shameful.
Reply  |  Post Message  |  Messages List  |  Start a Board

You buy a Blackberry phone because of it's reputation for security. The things are several hundred dollars after all,and you can pick up an android for 109$ Cnd here in Ottawa as of a week ago. Full price no contract.


Windows OS is owned by microsoft who is beholden to Homeland Secruity , FISA 215 , and the whole NSA security mess. Any phone running windows (most black berries ) is now viewed with supreme suspicion by any tech security people.

Android OS is owned by google , which is STILL beholden to homeland secruity , FISA 215, and NSA , and is STILL viewed with supreme suspicion by any tech people. Any american product will be , of course, since USGov is now requiring all us corperations to cooperate with the NSA , put in back doors, break encryption , etc.

I believe it's a good idea to get rid of that microsoft OS , which is highly untrustworthy securitywise these days. But swapping it out for an OS that is just as untrustworthy (android) would be quite foolish.  The black berry representative in this article mentioned some kind of custom black berry 10 OS , I believe that is the way to go. Write your own OS from the ground up.  In these post snowden days, it's the only "secure" way to go.

(edited : added) Also , your own hardware  ,no buying cheap parts from the USA or China. Now that we're into the age where the USA is putting extra little bits of hardware into CISCO routers that are being shipped to china , that's dead, security wise. All parts have to be built entirely in the country of origin. Starting right from sand and screws and wires, to making your own chips and boards and cases. All the way up .

It's a brave new world, and it's gonna take a while to adapt.
Reply  |  Post Message  |  Messages List  |  Start a Board
Editors' Choice
Hot Topics