The BlackBerry Passport 2, or "Oslo," smartphone sports a more curved and rounded casing, but still offers the same square screen as the first Passport handset, according to a published report.

Smartphone manufacturer BlackBerry has not yet confirmed an official release for 2015, but images of a handset called the BlackBerry Passport 2, or "Oslo," have surfaced on the technology blog N4BB.

The photos show a BlackBerry handset with a very similar design to the company's current Passport smartphone, which was released in October and features a 4.5-inch square display and the company's trademark physical QWERTY keyboard.

However, the corners of the device appear to be much rounder than the sharp edges of the Passport are. The Oslo -- which may just be a temporary moniker for the smartphone -- also sports a silver plastic and steel frame.

"The backside of the Oslo features a textured rubberized back, similar to the Z3 and Leap," the post pointed out. "However, instead of dimpled, the Oslo's back appears to be beveled."

The blog also revealed that the Oslo features a 2.2GHz MSM8974 Qualcomm Snapdragon processor, 13-megapixel camera, 3GB of RAM, and a 3450 mAh battery, which also match the specifications of the Passport. 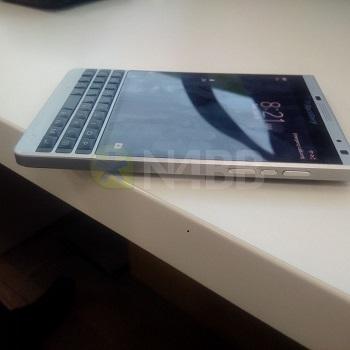 The handset will run BlackBerry's 10.3.2 operating system and is targeted at the Europe Middle East and Africa (EMEA) and the Asia-Pacific markets.

Beyond material touches and the technical specifications, the photos indicate that BlackBerry is comfortable sticking with its square design, an oddity among the rectangular designs favored by market leaders like Samsung and Apple.

The company claims the size and shape were determined by analyzing the demands of business users, who may be more likely to viewing or editing documents in addition to browsing the Web or reading e-books.

In May, BlackBerry's in-house blog posted a lengthy article drawing attention to the device's high levels of customer satisfaction among users.

Fervor from fans aside, BlackBerry still occupies a miniscule space in the worldwide smartphone market.

According to a May report from IT research firm Gartner, which looked at smartphone sales to end users by operating system for the first quarter of 2015, BlackBerry landed in fourth place behind Google Android, Apple iOS, and Microsoft Windows with a market share of 0.4 percent. This tied it with the category "Other OS," which rounded out the top five.

[Read about the upcoming BlackBerry Leap.]

The Canadian company's trials and tribulations, which lead to its fall from the top of the smartphone market, have been captured in a new book that suggests BlackBerry did not anticipate the popularity of the first iPhone, and Apple's ability to capture not only consumers, but business users as well. In addition, company executives were taken aback when AT&T agreed to allow Apple to include a full Web browser on the smartphone, making it a much more versatile and useful device.

Adding to BlackBerry's uphill climb is continued resistance to its unusual design. An article in Forbes concerning the leaked Oslo photos commented that the design was still an "ugly mess."