RIM's three new BlackBerry models deliver sleek hardware and an improved OS. How do they stack up against iPhone and Android rivals? 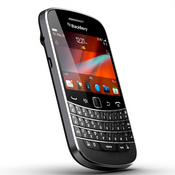 BlackBerry 9900 Bold
The Torch 9810 is my favorite of the three phones because it offers the best of both worlds: large touch-screen, slide-out keyboard. The keyboard has always been a BlackBerry strong suit, and nothing has really changed here, although side-by-side with the original Torch, the 9810's keyboard feels that much softer and more responsive.

RIM finally got the touchscreen right with the Torch, after some epic failures on the Storm, but this touchscreen still wasn't very responsive. In fact, there were times it was downright annoying. As friends happily swiped and flicked away on an iPhone, BlackBerry users carefully pulled and stretched, as if the BlackBerry's touch objects were set in taffy.

The 9810 just flies. E-mail, browsing, Facebook, apps, the camera, pinching, zooming, swiping. Sometimes the original Torch, after a few days, would just get bogged down and need a reboot. I've been running the 9810 for five straight days and it's still going strong, impatiently waiting for my next move.

Beyond speed, there's really little difference. I'm not sure it matters, but the "call" and "end call" buttons, once green and red, respectively, are now simply white. I liked them better in color, but I'm hardly lost without it--I still accidentally hang up on people in the same manner I once did, or sometimes even on purpose. Except for the brushed aluminum casing, the 9810 looks identical to the old Torch--it feels just as heavy and thick, and especially so compared to the Bold 9900 and Torch 9850. It weighs 161g, and is 14.6mm thick--noticeably thicker than the Torch 9850, but also shorter.

The Torch 9810 runs on AT&T's HSPA + network, costs $49 with a two year contract, and is available in stores starting August 21.

The Bold 9900 (GSM; 9930 CDMA) is, according to RIM, the thinnest BlackBerry ever at a mere 10.5 mm thick. It is also the lightest of the bunch, at 130g. Like the Torch, it offers both the keyboard and, now, for the first time, a touch-interface to accompany the optical trackball. In other words, you can interact with the phone in whatever manner best suits you.

The keyboard on the Bold is, simply, unsurpassed. During a year away from the Bold model, I'd gotten used to the outstanding Torch keyboard, but it pales in comparison--like the difference between vinyl and leather.

In fact, overall the 9900 has an incredibly solid feel. Its sturdy, brushed stainless steel frame is substantive compared to the Bold of yesteryear; its backplate is made of a high-gloss glass-weave, adapted from aerospace composite, whatever that means. It just feels right. The screen is only 2.8 inches, but the 640x480 resolution is excellent and the touch interface is fast and responsive. It feels like a grownup's phone, finally.

The Bold may be one of RIM's best-selling BlackBerry devices ever (the company has never broken out these figures), but after using the Torch for about a year, it's very difficult to get used to the small screen of the Bold again. It may just be me, but the raised keyboard made using the optical trackpad a bit clunky. I immediately just used the screen's touch interface instead, which has just become a natural way to use a phone these days.

The 9900 also includes built in Near Field Communication (NFC). This is the only NFC phone in RIM's stable, but this capability will come to other phones soon, according to RIM's Andrew Bocking, VP BlackBerry Software.

BlackBerry Torch 9860/9850
The Torch 9850 (CDMA; 9860 on GSM) is a reworked Storm, in that it provides only a touch interface (plus the optical trackpad), just like the iPhone and many Android phones. Gone is the SurePress screen that felt like you were depressing bubble wrap. What this form factor allowed RIM to do was build a bigger screen, with higher resolution.

Because I use my mobile phone for lengthier e-mails, I like physical keyboards. However, the Torch 9850 touch keyboard worked great, predicting my thoughts and giving me word choices as I typed. I did miss the ".com" key, however--a convenient shortcut on most keyboards nowadays. Also, I always find I can't look away while typing on touch keypads, and this was very true with the Torch. But for those who want the highest resolution and biggest screen, the Torch 9850 holds its own.