Dell's first U.S. smartphone, the Aero, is based on Google's Android operating system. 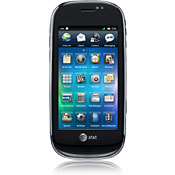 Dell Aero Smartphone
AT&T will be the first U.S. carrier with Dell's Aero smartphone. The Monday announcement came the same day the carrier said it would also offer Palm's Pre Plus and Pixi Plus smartphones, based on the Palm WebOS launched about a year ago. The Aero will feature a user interface developed by Dell and AT&T.

The Aero will include a 5 megapixel camera and mini-applications that provide access to the Flickr and Picassa photo sites, the YouTube video site and the Facebook social network. The smartphone has a 3.5-inch display.

The device also includes a global positioning system, Web browser and support for Adobe Flash, which is missing from Apple's iPhone. AT&T is taking pre-orders online for the Aero, but has not said when it would be available.

After months of media speculation, Dell formally introduced its smartphone late last year, releasing the device first in China and Brazil. While AT&T will be first to market with the device, Dell has said it will make the Aero available through multiple carriers, including Verizon Wireless.

In the U.S., Dell enters a crowded smartphone market, led by Research in Motion, which dominates the corporate market, followed by Apple, which is gaining strength in the consumer market. Meanwhile, Android-based smartphones from other manufacturers are gaining market share at the expense of the more established player Palm.

Analysts have said that Dell is making a risky move entering the smartphone market, given its relative inexperience in the market. To be successful, Dell's phone will have to offer features that people want and are not available in other phones, particularly Apple's iPhone and RIM's BlackBerry.