50%
Tweet
The telecom will begin taking preorders Feb. 13 for its first 4G smartphone, which boasts enough power to drive a laptop dock. 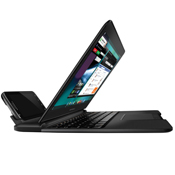 Motorola Atrix
(click image for larger view)
AT&T plans to start taking preorders Feb. 13 for the Motorola Atrix 4G, a smartphone with enough power to drive a laptop dock with a full screen and keyboard.

The telecom provider said Thursday that it would sell the Atrix for $200 with a two-year service agreement. Toss in another $300 and the carrier will sell you the Motorola dock, too.

The Atrix comes with dual-core 1-GHz processors, 1 GB of RAM, and 16 Gb of internal storage, which can be expanded to up to 48 GB via its microSD card slot. The smartphone runs Android version 2.2, called Froyo, and offers Motorola's Motoblur, a contact and social networking service.

The Atrix is AT&T's first smartphone to carry the 4G label, even though the company is not scheduled to start deploying its long-term evolution (LTE) network until later this year. In the meantime, people can use the carrier's HSPA+ network. The carrier says data speeds with the Atrix will reach a maximum of 14.4 Mb per second.

The Atrix's most anticipated feature is the dock, which Motorola unveiled along with the phone at the Consumer Electronics Show in Las Vegas early last month. The dock includes a full screen and keyboard and USB ports. It is made of magnesium alloy, is about a half-inch thick, and weighs 2.4 pounds.

The Atrix display offers roughly a quarter of high definition, or 960 x 540 pixels, which is similar to the iPhone's retina display. The device has a large 1930 mAh lithium battery that delivers up to nine hours of talk time. The smartphone weighs 4.8 ounces, measures 2.5 x 4.6 x 0.4 inches, and supports Bluetooth 2.1 and Wi-Fi 802.11b/g/n.

Motorola is not the first mobile device maker to come up with the idea of offering a laptop dock. Palm, before HP acquired it, had planned to release in 2007 the Palm Foleo mini-notebook that would have synchronized with the company's Treo line of phones. Palm canceled the Foleo three months after it was announced.

Combining a smartphone with a laptop dock reflects the growing power of the mobile devices, which could eventually become a viable alternative to low-end laptops. The Apple iPad and other tablet computers have already had an impact on notebook sales. Investment bank Goldman Sachs believes tablet sales will cannibalize PC sales at a rate of 33% to 35% this year, holding the PC market down to 8% growth over 2010.

CES 2011: Motorola's Atrix 4G is Powerful Enough to Run its own Laptop