In iOS 9, Apple's personal assistant will be become proactive about notifications.

In Apple's forthcoming iOS 9, Siri, the company's virtual assistant, has been taught to make suggestions and offer notifications without being asked.

The forthcoming version of Siri can, if allowed, find photos and videos associated with a time or place, suggest activities based on the user's location, advise a user when to leave for an appointment, and provide notifications about upcoming events, among other anticipatory feats.

The software's penchant for proactive assistance puts it into competition with Google Now, Google's automated assistance system. But Apple insists Siri is different.

During his keynote presentation at the company's Worldwide Developers Conference (WWDC) in San Francisco on Monday, Craig Federighi, SVP of software engineering, said Apple is "adding intelligence in a way that enhances your device, but without compromising privacy."

The suggestion here is that Google Now, with its broad access to data associated with various Google services, somehow represents a privacy risk. Fair or not -- a Google spokesperson pointed to the company's recently published "how we use data" website -- Apple is challenging Google on more than its privacy practices. Apple sees Siri as a way to become competitive with Google in mobile search. 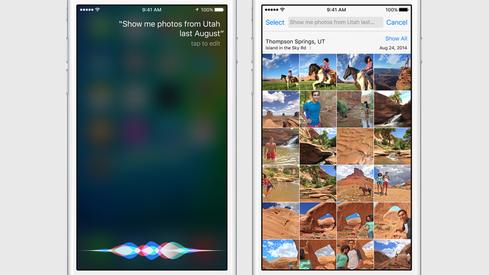 Mobile search is the future. In 10 countries already, including the United States and Japan, Google sees more searches take place on mobile devices than on desktop computers. That trend is expected to continue.

Siri handles more than 1 billion requests per week, according to Apple. That's far short of the overall number of search queries Google handles -- last officially confirmed in 2012 at 100 billion per month -- but only a small percentage of those are likely to be voice queries through Google's mobile app.

Apple's home field advantage on the iPhone and other iOS devices, however, is considerable. The home button on iOS devices triggers Siri exclusively. There's no option to set the Google app as the home button default. Apple also controls the Spotlight search service on its devices.

Siri is only part of the search experience on iOS devices. The software works in conjunction with Apple's search APIs, which have been expanded in iOS 9. Apple has added the new Core Spotlight framework to index app content and enable deep linking to that content. Deep linking allows a Spotlight or mobile Safari search result link to open an installed app directly (or to download the app if not installed) rather than directing the user to a mobile Web page.

Apple has also added search APIs for indexing activities (such as running) and states (such as editing a document or making a phone call) that can be relevant to a search, to specific apps, or to operating system services such as Handoff.

Google wants developers to make their app content searchable, so the content can be surfaced in search results outside the app. This helps developers by making their apps more visible to searchers, and it helps Google by adding to the information it uses make its ads relevant. Apple sees value in app content visibility as well, as a driver of app and content downloads, as a way to improve the user experience, and perhaps even as a data source to improve iAds.

In a phone interview, Gartner analyst Van Baker said he saw Apple's attention to Siri as a defensive move. "Google Now is still pretty far in front of Siri, especially on machine learning," he said, noting that Google introduced a context-aware suggestion capability called Now on Tap at its developer conference last month.

But as Siri learns to be proactive, it may have a few suggestions about how to make iOS search more meaningful for Apple and its customers.

Thomas Claburn has been writing about business and technology since 1996, for publications such as New Architect, PC Computing, InformationWeek, Salon, Wired, and Ziff Davis Smart Business. Before that, he worked in film and television, having earned a not particularly useful ... View Full Bio
We welcome your comments on this topic on our social media channels, or [contact us directly] with questions about the site.
Comment  |
Email This  |
Print  |
RSS
More Insights
Webcasts
The Failures of Static DLP and How to Protect Against Tomorrow's Email Breaches
How Elite Analyst Teams are Transforming Security with Cyber Reconnaissance
More Webcasts
White Papers
How to Prioritize Risk Across the Cyberattack Surface
The Insider's Guide to IP Geolocation Data During COVID-19
More White Papers
Reports
Special Report: Understanding Your Cyber Attackers
2020 State of Cybersecurity Operations and Incident Response
More Reports

10 IT Trends to Watch for in 2021 Cynthia Harvey, Freelance Journalist, InformationWeek,  12/22/2020
White Papers
How to Prioritize Risk Across the Cyberattack Surface
Passwordless: The Future of Authentication
The 2020 Duo Security Trusted Access Report
The 2020 Duo Security Trusted Access Report
Managing OTT Content Distribution in the Connected World