Apple's March 9 Event: Is It Time For The Apple Watch? - InformationWeek

Apple fans and non-fans alike are waiting to "watch" what happens. Let the speculation begin.

If you've been on social media over the last few hours, you've likely seen that Apple has distributed invitations for its spring media event. It's set to take place in San Francisco on March 9, about one month before the anticipated launch of Apple Watch.

The Apple Watch is predicted to take the spotlight. While the company did not specify what the day's announcements will include, it did entitle the event Spring Forward and schedule it for the day after we all change our clocks for daylight saving time. The company may also reveal upgrades to the iPad, which could be expected given the decrease in tablet sales among major retailers.

A variety of features are expected to run on Apple's smartwatch, including the ability to pay for goods at checkout, keep track of personal health data, and check email. It's the first major product release from Apple since the iPad in 2010.

The timing for Apple's event also coincides with Mobile World Congress, which will commence in Barcelona next week. It looks like Android's announcements that day might have some competition, reports ZDNet.

Apple's move into wearables may very well set the stage for the future of the market. Although wearable tech has generated a lot of hype, it has struggled to catch on among consumers. A mere 720,000 smartwatches based on Google's Android Wear platform shipped in 2014, pointing to an unexpectedly soft demand.

Although it's not set to roll out for another few weeks, the Apple Watch already faces competition. Swiss watchmaker Swatch (say that five times fast) announced that it will release a self-charging smartwatch by early May. CEO Nick Hayek claims that the device will use NFC to communicate with other hardware, enable mobile payments, and work with Android and Windows. 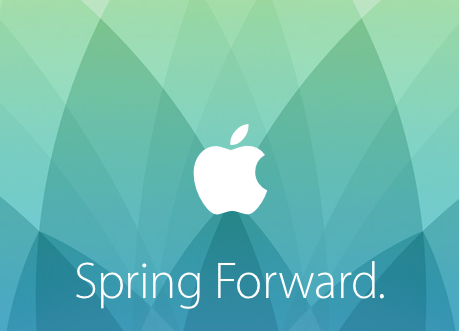 Pebble has also made tech headlines this week by breaking a Kickstarter record for its new smartwatch project. The company recently sought funding for the Pebble Time, a color smartwatch with e-paper display. Its campaign generated $1 million in the first 30 minutes -- the shortest window of time for any project to reach that amount -- and over $10 million in total. Pebble expects to launch the product in May 2015.

Apple is counting on apps to generate demand for its wearable device.

Data from Global Equities Research, which includes the opinions from about 500 Apple iOS developers, predicts that Apple may have about 100,000 Apple Watch applications on the App Store by April 10. Experts don't seem to think that the $350 price will be an issue for most current iPhone users, of which there are 350 million.

Trip Chowdhry, managing director of equity research at Global Equities Research, has also written in reports to clients that he expects the Apple Watch to go on sale by April 10, and that Apple could sell between 8 and 10 million watches within the first quarter. He also believes that most iPhone users are potential Watch users, and the release of this device will boost sales of all Apple products, including Macs, iPhones, and iPads.

Kelly Sheridan is the Staff Editor at Dark Reading, where she focuses on cybersecurity news and analysis. She is a business technology journalist who previously reported for InformationWeek, where she covered Microsoft, and Insurance & Technology, where she covered financial ... View Full Bio
We welcome your comments on this topic on our social media channels, or [contact us directly] with questions about the site.
Comment  |
Email This  |
Print  |
RSS
More Insights
Webcasts
What We Can Learn from Sports Analytics
The Failures of Static DLP and How to Protect Against Tomorrow's Email Breaches
More Webcasts
White Papers
5 Steps to Zero Trust in the Data Center
From MFA to Zero Trust
More White Papers
Reports
The State of Threat Detection and Response
Evolution of Ransomware Gangs
More Reports

Apple Watch is a really nice marketing strategy, however, the past few hours I have been on social media has been deluged with news of reclassification of the ISPs into Title II regs, which, effectively, puts them on a short leash and *not* free to shake down consumers based on their say so.  Yay for net neutrality.
Reply  |  Post Message  |  Messages List  |  Start a Board

I would love to attend Apple's Spring Media event this year. The Apple Watch of course will be heavily marketed, but I have a feeling there is something else coming up and it's going to be big! March 9 can't get here soon enough.
Reply  |  Post Message  |  Messages List  |  Start a Board

I'm very curious. The ad is a not-so-subtle hint that a watch is in the works, but after Microsoft's surprise with HoloLens, I'm wondering if Apple has something else up its sleeve.
Reply  |  Post Message  |  Messages List  |  Start a Board

@Kelly22- I can't imagine a watch would get anyone but the usual fans all that excited. I'd like to think they've got something else, especially since they are admitting they keep having to take features out of the first watch to get it out on time.

I still want my prediction of content creation to come true. Apple TV creates first exclusive series or something would make me look like a genius. And really, that's all I care about. :)
Reply  |  Post Message  |  Messages List  |  Start a Board
Editors' Choice
Hot Topics