The Computer & Communications Industry Association and Electronic Frontier Foundation are among those filing friends-of-the-court briefs supporting Samsung in its appeal to the US Supreme Court. This latest wrinkle in the long-running Apple v. Samsung case raises important questions about how our patent system is being used.

When I was reporting on the Apple vs. Samsung trial in San Jose in 2012, I admit that I found myself focusing on one particular aspect that was not necessarily the most headline-grabbing part of the case.

The case was, broadly, about how Samsung allegedly stole ideas from the iPhone's design and utility patents and incorporated them into its Galaxy S smartphones, among others. The rounded edges of the iPhone were among the many design elements being discussed in the case. Instead of keeping my attention focused on the technical aspects of the patents, I found myself pondering that design element: The rounded corners of the Apple devices. How could anyone patent the rounded corners of a pocket device?

My great-grandfather had a pocket device with rounded corners -- his pocket watch. Those corners, plus a slender design, helped it slide in and out of his pocket. Granted, it hung on the end of a chain and didn't much look like an iPhone. But if you could patent the rounded corners of a pocket device, would a maker of replica pocket watches be subject to an Apple infringement suit?

I realized this took me completely off the rails of proper US District Court coverage, yet it seemed an essential question when pondering how far patents should be allowed to reach. 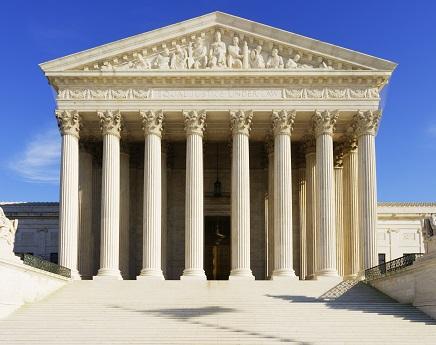 Samsung has a dismal history of borrowing other people's ideas, then using legalities to delay the day of reckoning. If you don't believe that, read Kurt Eichenwald's summary in the May 31, 2014, issue of Vanity Fair.

Even so, there's a larger issue at stake here. Apple possesses 199 design patents on the appearance of "an electronic device," also known as a smartphone. The patents are based on simple drawings filed with the US Patent Office. Having that many design elements under Apple's patent purview makes nearly every manufacturer of a phone that doesn't have square corners a potential Apple target.

In fact, the design patent on rounded corners was one of the standards that the jury used in 2012 to convict Samsung and set a $1.05 billion settlement. In March 2013, Judge Lucy Koh of US District Court for the Northern District of California reduced that sum to $548 million.

[Want to see more about how Apple tapped the US Patent Office? See Apple Worked a Broken Patent System.]

During the initial trial, Samsung demonstrated that its Galaxy S2's corners were not in the exact same proportion as the iPhone's. But what does that matter under our patent system? They were rounded.

All of this made me think the US Patent Office is mass-producing patents which defy common sense and should never be issued. The rounded-corner approach lies in the realm of design patents. There are also utility patents, which have to do with the functionality of a device, and there are similar issues there, with Apple patenting common smartphone functionality.

Last August, the US Federal Circuit Court of Appeals in Washington, D.C., upheld the US District Court decision against Samsung. In December 2015, Samsung asked the US Supreme Court to hear its appeal of that decision, and the company is getting support from a wide range of organizations, including the Computer & Communications industry Association (CCIA), the Electronic Frontier Foundation, and tech companies such as Dell, Facebook, and Google.

The Supreme Court hasn't yet decided whether to hear the case. If it does, it will consider an amicus, or friend of the court, brief filed by the Computer & Communications Industry Association (CCIA), a group founded in 1972 to represent a large, cross-industry set of companies. Members include Amazon, eBay, Facebook, Google, Intuit, Netflix, and Sprint.

Public Knowledge and EFF together filed an amicus brief stating if the verdict against Samsung was allowed to stand, it would "open the door to a new species of abusive patent legislation."

The CCIA outlined a similar concern, noting that if the decision is allowed to stand, "design patent infringement will become a new tool for patent assertion for entities to use to gain leverage …This issue is of great concern to CCIA’s member companies, many of whom sell or market complex electronic devices that incorporate many different designs."

The CCIA's brief asked that the court grant Samsung's petition and overturn the Appeals Court decision "because it grants a design patent an effective monopoly over an entire smartphone based solely on certain ornamental features. Considering that nearly all of the value of a device like a smartphone comes from its functionality, this breadth of scope would transform a design patent into a sort of super-utility patent, allowing a design patentee to control an industry …"

It's time we began to recognize patents are no longer doing what they were originally intended to do – protect the inventors of new ideas and their practical application in utilitarian devices. A diligent patent office would ensure that basic appearance, such as rounded corners and commonly used icons, do not belong to one company but are available to many competitors. That would offer a more level playing field for a broad host of consumer devices yet to come.

Charles Babcock is an editor-at-large for InformationWeek and author of Management Strategies for the Cloud Revolution, a McGraw-Hill book. He is the former editor-in-chief of Digital News, former software editor of Computerworld and former technology editor of Interactive ... View Full Bio
We welcome your comments on this topic on our social media channels, or [contact us directly] with questions about the site.
Comment  |
Email This  |
Print  |
RSS
More Insights
Webcasts
Building Asset Management into Your Enterprise Security Strategy
Managing a Hybrid Cloud Infrastructure
More Webcasts
White Papers
SANS Institute Survey: The State of Cloud Security
5 Steps to Perimeter-Less Security: Adopting a Zero-Trust Model
More White Papers
Reports
The State of Endpoint Security
DNS Network Traffic Volumes During the 2020 Pandemic
More Reports

There's a body of legal opinion that actually holds patents don't protect the inventor so much as the first successful  implementer. An invention without market application has less value than an invention that's found a broad market application. And to be fair, Apple describes itself as falling in that latter camp. But I wish a more laissez faire system would prevail, with patent protection restricted to the original inventor and fewer design elements and less functionality allowed to be made subject to patenting. It would take a discerning patent office to maintain such a system, and our is is undiscerning, underfunded and overwhelmed.
Reply  |  Post Message  |  Messages List  |  Start a Board
InformationWeek Is Getting an Upgrade!

Does Identity Hinder Hybrid-Cloud and Multi-Cloud Adoption? Joao-Pierre S. Ruth, Senior Writer,  4/1/2021
White Papers
From MFA to Zero Trust
5 Reasons to Protect your VPN with Multi-Factor Authentication
The Impact of the SolarWinds Breach on Cybersecurity
Simplify Your Application Security
Dark Reading Report: Battle for the Endpoint