The miniscule battery in the Apple Watch is the only component nimble-fingered technicians might be able to replace, according to iFixit's latest report.

Apple's mobile devices are generally not easy for do-it-yourselfers to fix. The Apple Watch, which launches today, proves no exception. iFixit's teardown of Apple's new wearable shows the construction makes it all-but-impossible to repair.

iFixit says the watch bands are easy to remove and swap, but points out they don't conform to industry standards. Given the wide variety of bands Apple is making available for the Watch, the company clearly expects consumers to purchase extra bands and change them regularly. Everything else about the Apple Watch is difficult.

The screen has to be removed to access any of the innards, and iFixit says the display doesn't come off easily. iFixit used razor blades to pry it loose. Once the screen is off, the battery is easy to remove. Only a small amount of glue holds it in place. 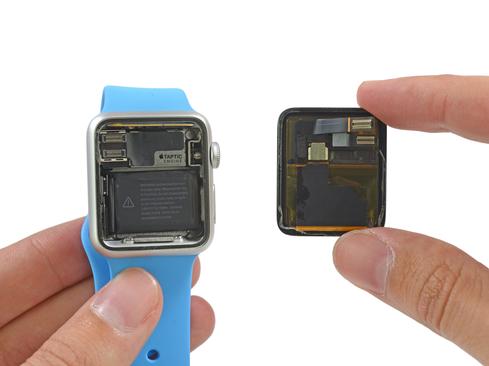 The battery is just 205mAh, which is much smaller than the Moto 360's 300mAh battery and the LG G Watch R's 400mAh battery. Early reviews of the Apple watch said the device struggled to last a full day, so it's curious that Apple gave it such a small power supply.

Beyond the battery, not much else can be replaced.

"Removing any other component is essentially impossible," according to the iFixit engineers. "All peripheral cables are soldered onto the back of the S1 [processor]. While not proprietary, incredibly tiny tri-wing screws are a repair hindrance, especially when Torx or Phillips could have been used."

iFixit tore the Apple Watch down completely, however, and splayed its guts in fine fashion on video. The heart rate monitor component proved surprising.

"Apple's heart rate monitor is actually a plethysmograph that looks and acts like a pulse oximeter, but Apple isn't claiming it can measure your blood oxygen level. Why? Beats us. But it's probably FDA regulation related," according to the iFixit report.

With really only one replaceable part, iFixit said the Apple Watch isn't designed for the long haul. That's a rather concerning sentiment given that some models cost as much as $17,000.

Apple made the Watch available for preorders April 10. The first wave of devices is reaching consumers April 24. Consumers can go to Apple Stores to look at, and even try on the Apple Watch, but for the moment Apple is only selling the device online. (You can buy one at some high-end boutique shops.) Supply of the device is limited, and delivery times stretch out until July for select models.

[Read about the teardown of the Galaxy S6 Edge.]

It's been a busy few weeks for the iFixit team. Earlier this month, engineers tore down the new Samsung Galaxy S6 and S6 Edge and found that the removable battery of older models is now gone, making the smartphones harder to fix.