Apple on Thursday introduced updated models of its iPad Air, iPad mini, iMac, and Mac mini, along with a revision of its desktop operating system, OS X Yosemite, and an update to its mobile operating system, iOS 8.1.

The announcements follow the company's launch last month of the iPhone 6, iPhone 6 Plus, and iOS 8, and its preview of next year's Apple Watch.

At a media event, Apple CEO Tim Cook said Apple Pay will be available on Monday, October 20. "We think it is going to be profound," he said, noting that 500 banks and many large retailers now support Apple Pay.

Cook said that WatchKit, the company's Apple Watch API, will be available to developers next month. The Apple Watch is scheduled for release in early 2015.

Craig Federighi, SVP of software engineering, provided a demonstration of one of OS X Yosemite's most anticipated features, Continuity, a set of services that make Apple devices aware of each other and make files available across those devices. Taking a lighthearted look at Apple's penchant for secrecy, the demo involved a call to comedian Stephen Colbert, who urged Federighi to hurry up with the Apple Watch.

The iPad Air 2 now includes Apple's Touch ID sensor in its Home button, which allows users to authenticate themselves using a fingerprint, eliminating the burden of password entry. It also comes with a more powerful Apple-designed A8X processor, similar to the iPhone 6's A8 processor but tuned the demands of graphics on a larger screen.

Apple SVP of worldwide marketing Phil Schiller said that the A8X processor is 40% faster than its predecessor and can achieve as much as 2.5x better GPU performance.

Showing off the new iPad Air 2, Cook extolled its lightness. "It's unbelievably gorgeous, and look how thin it is," he said. "Can you even see it?" 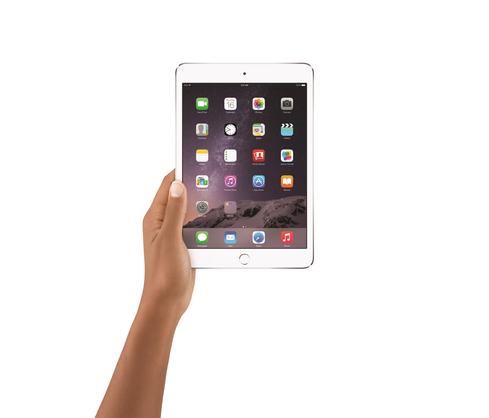 Apple will begin taking iPad Air 2 and iPad mini 3 pre-orders on Friday, October 17, and plans to ship the devices in a week.

The new 27-inch iMac has "the world's highest-resolution display," said Schiller. "There are seven times more pixels on an iMac display than on your HD TV." Yet this Retina 5K display uses 30% less energy than conventional iMac displays. It comes with a 3.5-GHz quad-core Intel Core i5, capable of 3.9-GHz via Turbo Boost, AMD Radeon R9 M290X graphics, 8 GB of memory, and a 1-TB Fusion Drive. It starts at $2,499 and is now available through Apple's online store.

Cook closed the event by highlighting the advantages of Apple's tightly controlled ecosystem.

Apple's products, Cook said, "are designed to be incredible products individually, but they're also designed to work together seamlessly."

Thomas Claburn has been writing about business and technology since 1996, for publications such as New Architect, PC Computing, InformationWeek, Salon, Wired, and Ziff Davis Smart Business. Before that, he worked in film and television, having earned a not particularly useful ... View Full Bio
We welcome your comments on this topic on our social media channels, or [contact us directly] with questions about the site.
Comment  |
Email This  |
Print  |
RSS
More Insights
Webcasts
Protecting Your Enterprise's Intellectual Property
Strategies for Success with Digital Transformation
More Webcasts
White Papers
Cyber Threats & Trends: Jan-June 2020
Managing OTT Content Distribution in the Connected World
More White Papers
Reports
2020: Threats in Review
Annual Global State of the WAN
More Reports

Maybe you meant to say that the OS X Yosemite is now available as a free download from the AppStore, instead of Mavericks?

... "are designed to be incredible products individually, but they're also designed to work together seamlessly."

That's the beauty of the whole Apple ecosystem and why you get the best out of the individual devices. I believe Thursday's announcement was packed with great news for Apple users.

I think Apple needs to continue to innovate new devices and continue to enhance its current line of products.  The consumer technology market is really tought and competitive. Otherwise, they will fall behind as many other companies have.  The leader today, may be the loser tomorrow.
Reply  |  Post Message  |  Messages List  |  Start a Board

It is really good to see Apple trying to make something clear amidst the confusion that was iOS 8.1. It is a very bold, and in somewhat sense a welcome move since the portability of Apple mobile products to iOS 8 was a disaster. I am eager to see what kind of marketing genius Apple pulls to stay on top of the ladder.
Reply  |  Post Message  |  Messages List  |  Start a Board

@danielcawrey: They should change streams, because some of their recent ventures with the cloud and with some products has been met with disasters. If they can gain the confidence of people using Apple Pay then they might get their hopes back up about being the market leader. Although I think the iMac is a little overpriced considering the hardware would cost less than half that price.
Reply  |  Post Message  |  Messages List  |  Start a Board

I'm very impressed that Apple Pay is going to debut with 500 banking partners on iOS. And I have read tha the security is top notch.

Given all the issues with data breaches and payment vulnerabilites, Apple may become a leader in the mobile payments space in one fell swoop. What a surprise: The company is now experts at changing industries very quickly, and there is no doubt payments are in need of some serious innovation.
Reply  |  Post Message  |  Messages List  |  Start a Board
Editors' Choice
Hot Topics