Apple SIM: Not Quite A Revolution - InformationWeek

50%
Tweet
The Apple iPad Air 2's inclusion of a SIM card that lets users choose among cellular data plans won't change the mobile industry all that much. Here's why.

When Apple introduced its iPad Air 2 on Thursday, no one said anything about radically altering the balance of power in the mobile industry. But on Friday, the possibility was being widely discussed, because the iPad Air 2 comes with an Apple SIM card that allows users to choose among different mobile carriers' data plans.

Apple notes matter-of-factly that the Apple SIM comes pre-installed on iPad Air 2 models equipped with WiFi and cellular connectivity. "The Apple SIM gives you the flexibility to choose from a variety of short-term plans from select carriers in the US and UK right on your iPad," the company says on its website. "So whenever you need it, you can choose the plan that works best for you -- with no long-term commitments."

Long-term commitments have been the bread and butter of mobile carriers for years. In exchange for signing service contracts with mobile carriers, customers have been able to acquire expensive smartphones for a nominal fee, with additional payments included in monthly subscription fees.

By offering customers a choice of short-term data plans without commitments, the Apple SIM could disempower mobile carriers, eroding brand affinity and turning them into commodity data carriers or "dumb pipes" -- assuming that network speed, reliability, and availability are indistinguishable.

That is, it could -- if the Apple SIM were available in iPhones and enough mobile carriers participated. Presently, only AT&T, Sprint, T-Mobile, and EE have signed on. Perhaps the SIM will be more widespread one day, but at the moment, it's available only in the iPad 2 Air. 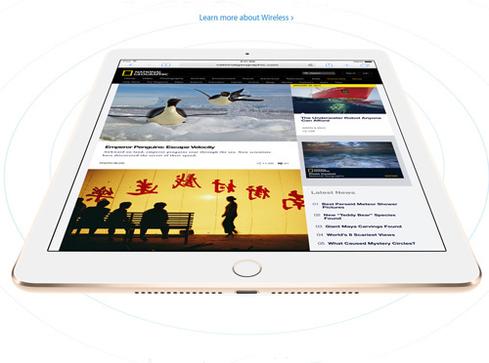 Gartner research vice president Van Baker argues that Apple SIM isn't that transformative in the iPad. "I don't think it changes the playing field dramatically," he said in a phone interview. Data plans for iPads are typically month-to-month already.

Most iPads, Baker said, rely on WiFi and don't use cellular data at all. And people who do buy iPads with a cellular radio often don't enable cellular service. (If they do, they might buy it as an add-on to their post-paid smartphone data plan, rather than as a separate prepaid plan.)

"If the Apple SIM were available for iPhones, I think it would be a different story," he said.

In short, it's premature to predict a mobile industry revolution, even if that might be a long-term ulterior motive. The Apple SIM is more likely have the effect that Apple describes on its website. It will make relying on cellular data connectivity easier for travelers with iPads.

But the industry is changing all the same. It's moving away from subsidized phones, because recouping subsidies becomes harder when unlimited talk and texting limits fee potential. Baker suggests that mobile carriers will embrace WiFi calling as a way to move traffic off their networks and avoid network congestion that would require more cell tower investments.

Thomas Claburn has been writing about business and technology since 1996, for publications such as New Architect, PC Computing, InformationWeek, Salon, Wired, and Ziff Davis Smart Business. Before that, he worked in film and television, having earned a not particularly useful ... View Full Bio
We welcome your comments on this topic on our social media channels, or [contact us directly] with questions about the site.
Comment  |
Email This  |
Print  |
RSS
More Insights
Webcasts
Enabling a Smooth DX Transformation in the Post-Pandemic New Tomorrow
IT Automation: Scaling to the Future
More Webcasts
White Papers
Securing IT & OT in Industrial Environments
Ransomware Response Report: Trends & Outlook
More White Papers
Reports
An Insider's View into a Supply Chain Attack
Making the Financial Case for Outsourcing Endpoint Protection
More Reports

The article implies most folks who buy an iPad don't enable the cell radio.  I find this hard to believe since Apple charges a premium for that option.  Why would someone spend considerably more for a feature they never use?

While built-in cell connectivity for certain vertical markets is a fantastic option, I've never thought it makes sense for consumers who already have smart phones.  The procedure to enable the phone's hot spot and connect the tablet are quick and easy.

Other than reducing your smart phone's battery life, the only significant drawback is the ease of keeping cell data use in check.  When a hot spot is available, an iPad with a built-in cell connectivity will automatically switch to WiFi instead of cell.  A WiFi only iPad will continue to use the smart phone hot spot unless it's disabled to force the iPad to find another.
Reply  |  Post Message  |  Messages List  |  Start a Board

"I am pretty sure that this will eventually come for all smartphones. This would increase the air of competition among telcos."

Exactly. I see this coming, too. It wouldn't be surprising if the Apple SIM is introduced in the next iPhones.

That would make iPhones even more attractive to anyone who dislikes being chained to a service provider for a long time, especially when realizing after a while that they are not really happy with the service.

And, as you said, all this would force telcos to improve their service and customer service as well, so they can work toward customer retention better and/or gain new customers.

I have quite the same view as you, I don't consider this move will change anything in the field, neither gives much alternatives or privileges to the users as long that concern the iPad field. As you have already mentioned, if we see that move to take apart in the mobile field that will make a fuss and, well there are many to discuss about.
Reply  |  Post Message  |  Messages List  |  Start a Board

Consumer demand is what will move the needle on Apple SIM or any other changes that would affect how the mobile carriers do business in the US. If consumers continue to buy the next newest device, there won't be any reason for anyone to include major changes. If consumers don't buy the devices without Apple SIM, that would send a message.
Reply  |  Post Message  |  Messages List  |  Start a Board

I think it may not be a revolution for now but it surely has laid the foundation for revolution later. If people opt for this, I am pretty sure that this will eventually come for all smartphones. This would increase the air of competition among telcos.
Reply  |  Post Message  |  Messages List  |  Start a Board

It may not be a revolution, but perhaps it is the first crack in The Wall.
Reply  |  Post Message  |  Messages List  |  Start a Board
Editors' Choice
Hot Topics