50%
Tweet
Apple reported $18.4 billion in profit during its first fiscal quarter of 2016, but iPhone sales are predicted to drop in coming months.

Apple had its most profitable quarter to date in Q1 2016, but there's trouble brewing in Cupertino. iPhone sales, which drove this quarter's success, are predicted to tumble for the first time.

CEO Tim Cook acknowledged the effects of turbulent global markets on economic growth. In constant currency, growth would have been 8%, or about $80.8 billion, he said.

[ More on Apple: details emerge on the iPhone 5se and iPad Air 3. ]

Global economies have a significant affect on Apple's financial results, as two-thirds of the company's revenue is now generated outside the US, Cook explained.

Earnings for the first quarter were primarily driven by record sales for iPhone, Services, Apple TV, and expanded distribution of Apple Watch. iPhone sales hit 74.8 million units during the most recent quarter, an all-time high, but an increase of less than 1% from 74.5 million in the same period one year ago.

Apple set a quarterly record for Apple Watch sales and expanded distribution to 12,000 locations. The Watch falls under the "other products" category, along with hardware such as Apple TV and Beats accessories. This category pulled in $4.4 billion, an increase of 62% year-over-year (specific Watch numbers were not released).

Mac sales also declined, from 5.5 million units in Q1 2015 to 5.3 million for the most recent fiscal quarter. Mac sales in China, which increased 21% year-over-year, helped bolster the quarter.

Services generated $6.1 billion in revenue, which includes money from a patent lawsuit. Excluding the lawsuit, this amounts to about $5.5 billion, an increase of 15% year over year.

Apple's installed base of hardware has grown 25% year over year, driving the company to 1 billion active devices for the first time. This includes iPhone, iPad, Mac, Apple TV, Apple Watch, and iPod Touch devices that have been engaged with Apple services within the previous 90 days.

During its most recent quarter, the company earned $8.9 billion from installed base services. Apps played a major role in driving services revenue, with App Store revenue up 27%. The number of customers engaging in App Store transactions has grown 18% since the same period a year ago. 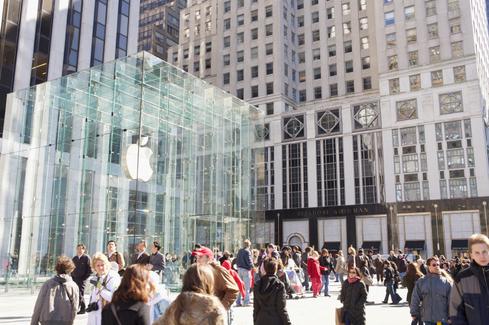 Looking ahead, it's expected Q2 2016 will be the most difficult quarter yet for Apple. Revenue is expected to hit between $50 billion and $53 billion, with a wider range due to volatility in the economy and financial markets.

In constant currency, this prediction would indicate a 5%-10% drop in revenue, explained Apple CFO Luca Maestri. For comparison purposes, Cupertino reported $58 billion in revenue for Q2 2015.

The coming months will also bring lower smartphone sales for Apple. "We do think that iPhone units will decline," said Cook of the next quarter.

One of the measures Apple has taken to minimize the effect of global economies has been increasing product prices in select international markets. Higher prices will likely influence demand, which Apple has factored into its expected results.

Kelly Sheridan is the Staff Editor at Dark Reading, where she focuses on cybersecurity news and analysis. She is a business technology journalist who previously reported for InformationWeek, where she covered Microsoft, and Insurance & Technology, where she covered financial ... View Full Bio
We welcome your comments on this topic on our social media channels, or [contact us directly] with questions about the site.
Comment  |
Email This  |
Print  |
RSS
More Insights
Webcasts
Shifting Security from Speedbump to Digital Accelerator
The 6 Must-Haves for Practical Cloud Security
More Webcasts
White Papers
Let's Talk: Why Language Matters in Cybersecurity
Digital Transformation Built on the Cloud
More White Papers
Reports
eSentire Annual Threat Intelligence Report: 2019 Perspectives and 2020 Predictions
Assessing Cybersecurity Risk in Today's Enterprise
More Reports

@SunitaT0 – Exactly IPhone 6 series was never a technological advancement. As you said it's just another device with a bigger screen. Most people never bothered to compare the specifications.
Reply  |  Post Message  |  Messages List  |  Start a Board

@Kelly22- I am sure they have some benefit by following this cycle. Apple wouldn't do anything without a befit.
Reply  |  Post Message  |  Messages List  |  Start a Board

Apple always keeps their devices at a premium rate, and always looks at the top end of the market and not everyone fits there. Today users have many options to choose from.
Reply  |  Post Message  |  Messages List  |  Start a Board

@Kelly: Apple's practises are as weird as the pricing on their phones.
Reply  |  Post Message  |  Messages List  |  Start a Board

This was bound to happen, as Apple really made a blunder by providing users with a bigger screen, since that is the trend now, users go for a bigger and better screen more than functionality because most aren't power users and most do not hulk-smash the phone on slight lag. The iPhone 6 to 6s wasn't that much of an advancement really.
Reply  |  Post Message  |  Messages List  |  Start a Board