Wearable devices will include sensors to track health and fitness, according to sources.

9 Mobile Apps To Get You Fit
(Click image for larger view and slideshow.)

Apple plans to enter the wearables market with a smartwatch as soon as October. The company may debut more than one such device, which will carry as many as 10 sensors for tracking the wearer's movements and vitals. Apple has lined up manufacturers, and production is expected to kick off in several months.

Wearables may be hot, but none of the devices on store shelves hits all the right marks. Perhaps Apple's wearables will change that. According to unnamed sources cited by The Wall Street Journal, Apple's wrist device will "address an overarching criticism of existing smartwatches that they fail to provide functions significantly different from that of a smartphone."

Many of today's smartwatches, such as the Pebble or Samsung Gear 2, are used as notification centers for nearby smartphones. They alert wearers to incoming messages, calls, email, and calendar appointments. Most can also interact with smartphone-based media players, fitness trackers, and other apps. Without the nearby smartphone, however, a lot of the features vanish. The Journal's sources didn't provide any clarity on just how Apple will solve this problem, but it is encouraging to know it is one of Apple's goals. 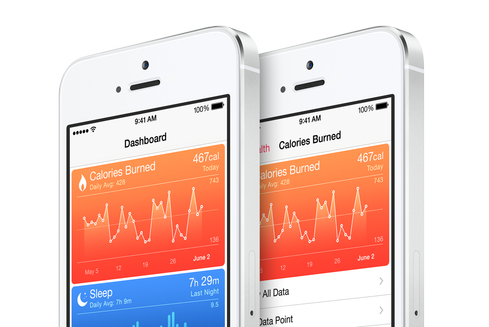 Apple may have tipped its hand concerning wearables earlier this month when it previewed iOS 8. Part of the new operating system is an app called Health, which can cull the data generated by third-party fitness apps and devices and present it in a meaningful way. It stands to reason that Apple will eventually introduce its own device for collecting and collating fitness data for the Health app within iOS 8.

Reports concerning the "iWatch" have been circulating since early 2013, but it appears as though the device is closer than ever. Apple CEO Tim Cook said as much during the company's most recent quarterly earnings call with press and analysts. Cook indicated the second half of the year will be packed with new products and new product categories. The new products almost certainly include revised iPhones and iPads, and the new product category will be Apple's first wearables.

The device will be made by Quanta Computer in Taiwan, reported the WSJ. Apple has used the company before to manufacture its computers. Apple's main wearable is expected to have a 2.2-inch curved screen, in addition to the bevy of sensors. There's no word if the second wearable will differ in form factor.

By the time Apple arrives in the market for wearables, it will be a late entrant. Companies such as Sony, Pebble, Samsung, LG, and Motorola have smartwatches in the market or on the way. Google is prepared to reveal Android Wear, its OS for wearables, in full at the I/O Developer Conference next week. Android Wear-based devices may reach retail long before Apple's device. That doesn't mean Apple can't redefine what wearables can and should do. Apple didn't make the first MP3 player, but it made the best one. Apple didn't make the first smartphone, but it made a groundbreaking one. Apple has the ecosystem in place to pull off a major victory with new wearable devices. October can't come soon enough.

Eric is a freelance writer for InformationWeek specializing in mobile technologies. View Full Bio
We welcome your comments on this topic on our social media channels, or [contact us directly] with questions about the site.
Comment  |
Email This  |
Print  |
RSS
More Insights
Webcasts
People Are The Most Important Part of Autonomous SOC
Don't Miss This Cybersecurity Virtual Event
More Webcasts
White Papers
High Performance Applications with the Dominion KX III
How Secure Are Your Endpoints?
More White Papers
Reports
The State of Endpoint Security
Assessing Cybersecurity Risk in Todays Enterprises
More Reports

The iWatch is kind of, been there, done that when it comes to wearables - it won't be particularly groundbreaking. However, if Apple can nail down the glucose testing without breaking the skin - and if it's Apple, you know that tech is patented - then that would be something truly groundbreaking and considering the adoption it would see in the healthcare community alone, could make the iWatch a real winner.
Reply  |  Post Message  |  Messages List  |  Start a Board

Do people need to strap an iPhone to their wrist? I don't see a unmet need for something like this. However, we all know about Apple's propensity to create something that many of us didn't know we even needed, so there you go.
Reply  |  Post Message  |  Messages List  |  Start a Board

Earlier today i saw (yet another!) study on mHealth adoption, but this one focused specifically on Apple's influence. The researchers credit Apple with bolstering the market and expect Apple's smartwatch to further explode the market. They don't have a lot of stats to support this; the report didn't include any leaked pre-orders, for example. If Apple has figured out the way to encourage physicians and others to 'prescribe' these devices to the millions of diabetics, overweight, people with heart problems, as well as those interested in health, fitness, diet, etc., then I'd say they're onto a great thing. If insurance covered a percentage of these devices or they were included in health saving accounts, I'd imagine that would further propel hardware sales, especially now consumers are more and more responsible for more of their own health costs (through higher premiums and/or deductibles).

I predict we'll see that happening, although i don't know if it will be in 2015. But certainly one day in the not too distant future, you'll be able to write off your Fitbit, Apple iWatch, or $1.99 nutrition app, i'd guess.
Reply  |  Post Message  |  Messages List  |  Start a Board

An iWatch -- fashionable or not -- really needs to feature something special for me to hop onboard. The "convenience" factor just doesn't cut it for me.
Reply  |  Post Message  |  Messages List  |  Start a Board

Would a real fashion statement by Apple change your mind about wearables, readers?
Reply  |  Post Message  |  Messages List  |  Start a Board

We've been hearing this for so long that it's becoming a boring routine now. What's really – and hopefully – interesting is the iWatch.
Reply  |  Post Message  |  Messages List  |  Start a Board
Editors' Choice
Hot Topics