Apple's order of up to 80 million devices suggests consumers want a larger iPhone, but will it hurt iPad sales?

Apple has ordered as many as 80 million 4.7- and 5.5-inch iPhones for a planned September launch. The larger iPhones are Apple's late response to changes in the market as demand for large-screened smartphones has surged in the last year. Some skeptics, however, think Apple could step into a catastrophe of "mini" proportions.

Apple, which has in recent years released new iPhones in September, has asked its suppliers to gear up for the iPhone 6 debut, which will come just ahead of the fourth quarter. The company is looking for between 70 million and 80 million devices combined, according to sources cited by The Wall Street Journal. The orders are significantly larger than the ones Apple placed last year for the iPhone 5s/5c, which totaled between 50 million and 60 million.

The Journal's sources suggest Apple is concerned about manufacturing yields for the larger screens, and it has ordered as many as 120 million touch screen panels. The iPhone 6 is expected to use the same in-cell technology found in the iPhone 5/5s/5c, which combines the touch sensor with the LCD itself to create a thinner overall component. Apple may also switch to sapphire instead of glass, which further complicates the manufacturing process. Sapphire is more difficult to work with but is more resistant to breakage.

Apple has long kept the iPhone small: The first five iPhones' screens measured 3.5 inches. Apple bumped the display up to 4 inches for the iPhone 5 and later models. When asked about making larger iPhones the late Steve Jobs said, "You can’t get your hand around it. No one’s going to buy that." On that matter, Jobs was wrong. During the last few years, demand for large screens has increased rapidly. Shipments of smartphones with screens 5 inches or larger shot up 369% during the first quarter of 2014 compared to the year-ago period.

Apple CEO Tim Cook has gone on the record several times to suggest that Apple won't release a device that compromises usability, and devices with screens larger than 5 inches are often cumbersome to use with just one hand. Cumbersome or not, Apple needs a larger iPhone to compete with HTC, Samsung, LG, and other competitors. 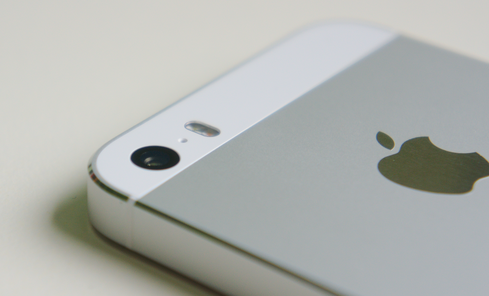 Even as consumers clamor for a larger iPhone, it may cause Apple trouble. Neil Mawston, an analyst with Strategy Analytics, worries the larger iPhones will hurt iPad Mini sales. "The larger iPhones may accelerate a fresh push toward larger-screen tablets," said Mawston. "The tablet category will need to innovate to differentiate from increasingly outsize smartphones."

Several research firms have also concluded in recent months that sales of large-screened phones are indeed impacting sales of small-screened tablets. The iPad Mini's screen measures 7.9 inches. An iPhone with a 5.5-inch display may steal interest from the iPad Mini, which has been a strong seller for Apple since its 2012 debut.

Apple declined to comment on the Journal's report but is due to discuss its quarterly earnings Tuesday. The company may drop a few hints about its plans for September.

This is an interesting discussion. Before I purchased the Samsung S4 I tried out a slightly larger LG. The LG was just enough bigger that it didn't sit well down in my pocket, and tended to fall out when I was sitting. I took it back for the Samsung.
Reply  |  Post Message  |  Messages List  |  Start a Board

This is an interesting discussion. Before I purchased the Samsung S4 I tried out a slightly larger LG. The LG was just enough bigger that it didn't sit well down in my pocket, and tended to fall out when I was sitting. I took it back for the Samsung.
Reply  |  Post Message  |  Messages List  |  Start a Board

At that point, why not just get a MacBook Air? I guess I like my tablet to fit in my coat pocket. But everybody's different.
Reply  |  Post Message  |  Messages List  |  Start a Board

I think the bigger tablets will be niche items, but they'll have a place. You can do things with them that 10-inch tablets don't handle as well. The Surface Pro 3 just "feels" right with its pen, for example, and if Microsoft and its partners can contine to compellingly evolve the software side of that, they'll create legitimate (but again, fairly niche) use cases.

I have larger smartphone (Galaxy S5) and a smaller tablet (Google Nexus 7) and I can say from experience that that the tablet gets neglected as the sizes get closer. Seems inevitable that a bigger iPhone will start to cannibalize the iPad Mini. But I'm also not sold on a jumbo tablet. 10-inches seems like the sweet spot. To go any bigger, you start to lose the benefit of portability.
Reply  |  Post Message  |  Messages List  |  Start a Board

I suspect the bigger iPhones will sell as well as Apple reportedly projects, and that it will indeed mitigate demand for the iPad Mini. But it's clear there's at least some room for growth in the plus-sized tablet market, and Apple's rumored to have a 12-inch iPad Pro in the pipeline. I suspect by this time next year, Apple will have three sizes of iPhones (current-gen as the "budget" option, plus the two news ones) and three sizes of iPads (mini, air, pro).
Reply  |  Post Message  |  Messages List  |  Start a Board

So you'd rather go with an analog phone and pass on the smartphone? Hmm.. Anyhow, I think it's interesting that Apple is deciding to go after one of Samsung's many markets. Considering some of the latter's flagship phones are larger in screen size than the average, it will be interesting to see how Apple will fare.
Reply  |  Post Message  |  Messages List  |  Start a Board

Perhaps this is one of the target markets Apple is going for. Seeing Samsung's sales and how they've sized their devices, it looks like Apple wants a share of that pie.
Reply  |  Post Message  |  Messages List  |  Start a Board

Whatever screen size the smart phones have, 4", 5" or 6", I think all of them cause wrinkle between the eyes. Crossed eyes may be another side effect to worry about.