Apple products and phablets were among the most popular electronic gifts to give this holiday season, according to a new report from Flurry Insights.

There's a good chance you, or someone you know, received an Apple gadget or new phablet during the Christmas holiday.

The mobile analytics firm tracks 780,000 apps during the week leading up to Christmas through Dec. 25. It aims to measure the number of device activations and app downloads for the holiday season.

Consumers are demonstrating stronger preference for larger smartphone models, as indicated by the jump in phablet demand. The bigger phones made up 27% of new device activations in the week leading up to Christmas.

The popularity of phablets was partly driven by the release of larger smartphones from Apple, which released its first phablet in September 2014 and followed up with the iPhone 6s Plus this year. In the year and a half that Apple has had a phablet on the market, the form factor has grown to reach 12% of Apple device activations during Christmastime.

Phablets became the dominant model for Android smartphones for the first time in 2015, accounting for 50% of all Android device activations. The expansion of Samsung Galaxy Note and its imitators, particularly across Asian markets, have been key for Android.

It should be noted that consumers are not choosing phablets over tablets. This seemed to be the case last year, when tablet share dropped from 17% in 2013 to 11% in 2014.

Full-size tablets made up 9% of new device activations in 2015, a 2% drop from the year prior. This includes the business-oriented iPad Pro, which represented less than 1% of device activations, Flurry reported.

Rather, it seems consumers are choosing phablets to replace smaller smartphones and find a middle ground between the iPhone and the iPad Mini. Medium-size smartphones accounted for 54% of new device activations this year, compared with 63% in 2014.

Small phones made up 1% of new devices, down from 2% in 2014. Models with screens measuring less than 3.5 inches are "nearly extinct," said Flurry's Jarah Euston, vice president of Growth, in a blog post. "We'd be surprised if they even make it on the chat next year," she continued. 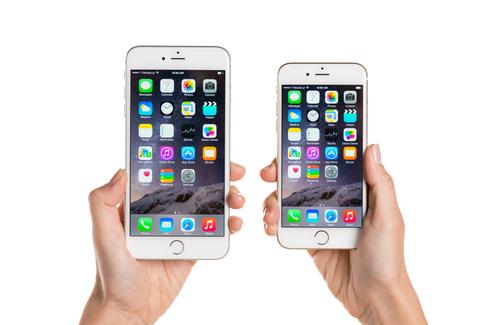 In terms of manufacturer popularity, Apple products accounted for 49.1% of new devices given during the holiday. This marks a 2.2% decrease from Christmas 2014, when it garnered 51.3% of marketshare.

Apple still came out far ahead of competitor Samsung, which made up 19.8% of holiday device activations. This is a 2.1% boost for Samsung, which accounted for 17.7% of new activations in 2014. The increase was driven by Samsung's new Galaxy Grand Prime, Core Prime, and S6 smartphones.

Microsoft's Nokia fell from 5.8% to 2% between 2014 and 2015, and Sony dropped out of the top 5 manufacturers. Chinese manufacturer Xiaomi entered the running with 1.5% of holiday activations, which is significant, given that Christmas is not the biggest gift-giving holiday in the country.

More apps were downloaded on Christmas Day than any other day of the year. The number of app installations on Christmas Day was 2.2 times greater than that of the average day in December, research shows.

Kelly Sheridan is the Staff Editor at Dark Reading, where she focuses on cybersecurity news and analysis. She is a business technology journalist who previously reported for InformationWeek, where she covered Microsoft, and Insurance & Technology, where she covered financial ... View Full Bio
We welcome your comments on this topic on our social media channels, or [contact us directly] with questions about the site.
Comment  |
Email This  |
Print  |
RSS
More Insights
Webcasts
People Are The Most Important Part of Autonomous SOC
Nip Ransomware in the FUD: Detecting Attacks Pre-Encryption
More Webcasts
White Papers
SUNBURST: Underlining the Importance of Right of Boom Risk Mitigation
MontanaPBS Shifts to Agile Broadcasting with Help from Raritan KVM Solutions
More White Papers
Reports
The State of Endpoint Security
Gartner Market Guide for Insider Risk Management Solutions
More Reports

I would say technology can bring people together even if they are in the same room . I often share photos with family members from my phone or tablet . I also share things that might be funny or interesting so your phone can be used to integrate people into a conversation . The issue arises when people take out their phones and stare at them and everyone sees only the top of their head . That is the issue I believe you're referring to with many of the clinics arising to address technology addiction . People who are disconnecting from the outside world in favor of their technology are completely in a different realm than those skyping a relative or sharing a photo with a family member far away .
Reply  |  Post Message  |  Messages List  |  Start a Board

The Kindle Tab is a really-really great product!

Absolutely-Absolutely value for money that product.

The Firephone failed because it did'nt connect with the needs of most consumers(who wanted more HDD and RAM for their multi-tasking ).

Amazon very smartly chose to cancel the experiment when they saw the writing on the wall.

Sure,if your family is hundreds/thousands of miles away from you physically then Technology can be very-very helpful.

But if they are in the same Room?

Then the situation changes and changes dramatically.

Consumers have to learn to stirke the right balance when it comes to Technology use.This is an issue which most folks just does'nt get currently.

I am guessing that's why we are seeing the massive surge in Technology De-addiction clinics globally.

I recommend Kindle Tablets as well - although FirePhone is not so good but Kindle Tablets is a good product with competitive price. For entertaiment, it did the job pretty well.
Reply  |  Post Message  |  Messages List  |  Start a Board

@Ashu001 Funny that you mentioned that. Just yesterday I watched a movie where the family has the same rules. No phones during Christmas. Also like in your case, the mum kept everyone busy,
A simple rule, but with a deep meaning.
Reply  |  Post Message  |  Messages List  |  Start a Board

I agree that smart phones and technology can distract us from our family gatherings . They can also be used as tools to bring family members together from skiyping far away family to taking and sharing photos . Technology can be used to build a bridge as well as isolate . The upsurge on Christmas is most likely due to all the new technology toys people received as gifts . Like any toy, for any child of any age, we are all anxious to try them out on Christmas .
Reply  |  Post Message  |  Messages List  |  Start a Board

All the latest Inventory reports,etc I have seen say Apple is doing very poorly on the Global Market.

It seems their performance in Emerging Markets like India and China was so bad that they were forced to slash prices by close to 50%!

Can you imagine the kind of Margin their products have and also the fact that most Consumers know & realize that their margin on these over-priced Gadgets is too much?

Not only is the Kindle great for Multiple -Entertainment uses but its quite cheap too(vis a vis an iPad).

Lets say you accidentally break or lose one;it really does'nt hurt much .Does it?

That's why I always love mid-range Electronic Products.Not too cheap but definitely easy on the Pocketbook!

Not only is the Kindle great for Multiple -Entertainment uses but its quite cheap too(vis a vis an iPad).

Lets say you accidentally break or lose one;it really does'nt hurt much .Does it?

That's why I always love mid-range Electronic Products.Not too cheap but definitely easy on the Pocketbook!

I don't look at the whole issue as its Unfortunate but rather the choice we as Families make every Christmas.

Do we chose to spend time with each other or poring our Smartphones?

That is entirely in our hands.Is'nt it?

My Mum has this simple rule-If you want to celebrate Christmas together then no smartphoen use at all.

But in all fairness to her;she makes all of us so busy with various festivities that nobody has any time to even look at their Smartphones.

Nokia's Demise in the smartphone space(they continue to do reasonably well in the Feature-phone space with their heavy duty&Robust phones has a lot to do with the fact they missed the Whole App Ecosystem curve entirely.

I don't think there is going to be any coming back for them in this space today.