Next week, all will be revealed. But if Apple introduces the iPhone 5, no one will be shocked. Apple's iOS 6 also likely to debut.

Apple all but announced the next version of its popular iPhone Tuesday when it sent out an invitation to a media event to be held in San Francisco on Wednesday, September 12 at 10:00 a.m. PDT. 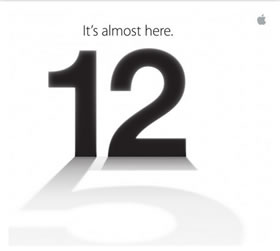 The invitation was anything but a surprise: Apple has been expected to hold a press conference to launch the next iPhone for months. However, the company has been unusually heavy-handed in hinting about what it plans to announce. The invitation shows the date of the event, the number 12, casting a shadow of the number 5.

Either this is a reference to the widely anticipated iPhone 5, or Apple is just stringing the public along for some unfathomable reason. The former possibility is much more likely, particularly given that the recent publication of reports about iPhone 5 components.

Last month, for example, iResQ, a device repair website, published images of what it claims is an iPhone 5 exterior casing. The images appear to confirm speculation that the iPhone 5 will be larger and will have a revised dock connector port.

Apple's event could also include the announcement of a new iPod touch, iPod Nano, and perhaps a 7" iPad. However, it now appears that Apple intends to discuss these devices at a subsequent event, perhaps in October.

Apple's mobile operating system refresh, iOS 6, is likely to be featured at next week's event. Apple developers have been working with pre-release versions of Apple's mobile operating system for several months. The company has said that iOS 6 is "coming this fall," but reports suggest that the iPhone 5, which presumably will ship with iOS 6, will be available September 21, the last day of summer.

Apple needs to do something to refresh its hardware. Samsung's Galaxy S3 is now selling faster than Apple's iPhone 4S, CNET reported.

And research firm Gartner recently noted that demand for Apple's iPhone was down 12.6% in the second quarter of 2012, compared to the first quarter, a dip the firm attributed to "users postponing upgrades to take advantage of high-profile device launches."

When it comes to high-profile device launches, there isn't likely to be one this year that attracts more attention.

We welcome your comments on this topic on our social media channels, or [contact us directly] with questions about the site.
Comment  |
Email This  |
Print  |
RSS
More Insights
Webcasts
How Elite Analyst Teams are Transforming Security with Cyber Reconnaissance
ROI and Beyond for the Cloud
More Webcasts
White Papers
How to Prioritize Risk Across the Cyberattack Surface
From MFA to Zero Trust
More White Papers
Reports
How Data Breaches Affect the Enterprise (2020)
2020 State of DevOps Report
More Reports