Apple's incremental iPad updates are compelling, but so is the all-new Nexus 9 tablet from Google. Which is right for you?

There's never been a better time to be a tech addict. Both Apple and Google trotted out new slates this week that are some of the most attractive and powerful tablets conceived. With new operating systems in tow, the iPad Air 2 and Nexus 9 are enough to tempt even the most conservative gadget buyer. Let's take a look at how they compare.

Apple showed off the iPad Air 2 and iPad Mini 3 at an event on Thursday. The larger of the two tablets saw more love from Apple's designers and engineers. Apple managed to make the iPad Air even thinner and lighter. The iPad Air 2 measures 6.1 mm, down 18% from the 7.5-mm thick iPad Air. The tablet also lost some weight, down from 1 pound to 0.96 pounds. It keeps the 9.7-inch Retina Display, but it is now laminated with an anti-reflective film. Apple says it is much easier to see the screen when outdoors. The iPad Air 2 is available in gray, gold, and silver.

The real improvements are inside the slate's slender frame. The iPad Air 2 is the only tablet bestowed with the A8X processor for Apple. It is a 64-bit engine and has the same M8 coprocessor found on the iPhone 6 and 6 Plus. The user-facing camera is unchanged, but the iSight camera on the back has been improved dramatically compared to last year's model. The sensor jumps from 5 megapixels to 8 megapixels, and it gains burst mode and slow-motion video capture. (Yes, Apple really wants people to use their iPads as cameras.) 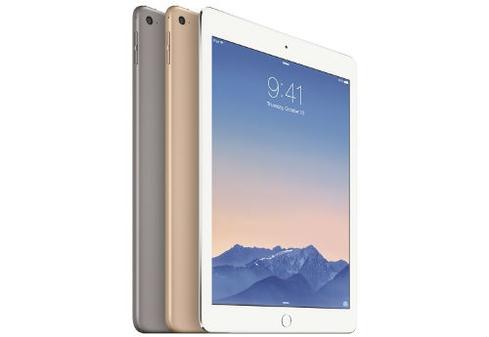 The other big change is the addition of the Touch ID fingerprint sensor on the front. Though the iPad Air 2 will be compatible with Apple Pay, it can only be used to make online purchases and not tap-and-go purchases at stores because it lacks the necessary NFC radio. The iPad Air 2 will ship with iOS 8.1.

As always, the starting price of the iPad Air 2 is $499 -- but you're not going to buy the $499 model. Apple is gaming the system. The $499 model has only 16 GB of storage, which is practically criminal when you consider the device is clearly meant to be a content monster. The $599 model offers 64 GB of storage, which is probably what most people will pick. Apple is offering a 128-GB model starting at $699, as well. These are all limited to WiFi. If you want LTE, prepare to cough up another $130. Ouch.

Google's tablet offers slightly less of everything when compared to the iPad Air 2, but is no less compelling. Google is firmly treading the middle ground with the Nexus 9. Where last year's Nexus 7 and Nexus 10 had 7- and 10-inch screens, respectively, the Nexus 9's 8.9-inch screen falls right in between. It has the same number of pixels as the iPad Air 2 (2,048 x 1,536), but the pixel density is a bit higher. The Nexus 9 adopts the 4:3 aspect ratio and weighs the same as the iPad Air 2, but is a smidge thicker at 7.95 mm. Google and HTC, which is manufacturing the Nexus 9, kept the design straightforward and simple. It is made from aluminum, but has a soft-touch finish so it is easy to grip. 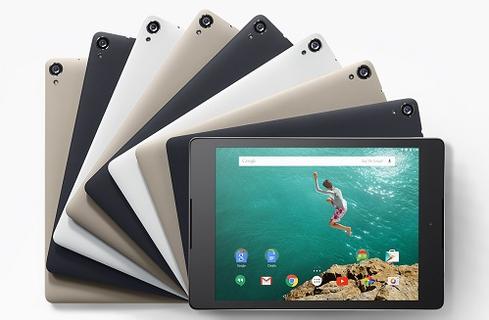 Google and HTC selected an Nvidia processor for the N9. It's a 64-bit Tegra K1 with two cores, each clocked at 2.3 GHz. It's paired with a 192-core Kepler GPU and it has 2 GB of RAM. The N9 features two cameras: a 1.6-megapixel user-facing camera and an 8-megapixel main camera. Both can capture HD video. The device carries over HTC"s signature BoomSound stereo speakers to make watching video a more enjoyable experience, and it has two microphones to better capture stereo sound.

Connectivity options are typical for this class of device. The base model includes dual-band WiFi, GPS, Bluetooth 4.0, and NFC. An LTE version will also be available. The Nexus 9 includes a bunch of sensors, and comes in three colors: black, white, and beige.

The base 16-GB model with WiFi costs $399. That's a huge jump from the Nexus 7's $229 starting price, but is somewhat warranted considering the bigger screen and form factor. Want the 32-GB model? It'll cost $480. The LTE model, which includes 32 GB of storage, costs a whopping $599. The Nexus 9 runs Android 5.0 Lollipop, which is a completely redesigned version of Android.

Perhaps the Nexus 9's biggest bummer is the battery. According to Google, the 6,700-mAh power supply is good for only 8.5 hours of LTE Web surfing. The iPad Air 2 can surf via LTE for 10 hours.

You can't go wrong with either tablet, as each offers an attractive design and robust feature set. In the end, the decision will likely boil down to an ecosystem play. Do you want to be part of Apple's world or Google's? Apple's ecosystem is fully formed, and Google's is catching up quickly. Both iOS 8.1 and Android 5.0 offer mobile professionals many of the tools they need to remain productive in and out of the office, with plenty of support for enterprise-grade controls and security.

Which new tablet has your eye? Sound off in the comments below.

Eric is a freelance writer for InformationWeek specializing in mobile technologies. View Full Bio
We welcome your comments on this topic on our social media channels, or [contact us directly] with questions about the site.
Comment  |
Email This  |
Print  |
RSS
More Insights
Webcasts
What We Can Learn from Sports Analytics
Building the SOC of the Future: Next-Generation Security Operations
More Webcasts
White Papers
5 Steps to Zero Trust in the Data Center
Zero Trust Evaluation Guide
More White Papers
Reports
Evolution of Ransomware Gangs
Building an Effective Cybersecurity Incident Response Team
More Reports

That is a really tough choice.  Both devices are great and have excellent capabilities.  Personally, I will get a Google nexus. It is large enought that I can be somewhat productive on the go.  I don't like smartphones that are too small.  The ipad will be too large for my taste.
Reply  |  Post Message  |  Messages List  |  Start a Board

The only expansion I see is via iCloud. I suspect it can only be used for data, not apps.
Reply  |  Post Message  |  Messages List  |  Start a Board

I think battery timing factor can't be left un-noticed. Its always a pain to see a Red light and get out of the bed to put the tab on charge. Any extra hours I can gain by switching manufacturer, I would go for it.
Reply  |  Post Message  |  Messages List  |  Start a Board

Does the Nexus tab have an SD slot? Assuming there is no expansion possibility for the iPad ...
Reply  |  Post Message  |  Messages List  |  Start a Board
Editors' Choice
Hot Topics