50%
Tweet
Next year, all of Apple's devices will use the new Apple File System, which promises flash/SSD optimization and improved encryption. It will replace the aging HFS+ file system.

Apple is planning to introduce a new file system, called Apple File System, as the default on all devices in 2017, and has provided developers with a preview in the developer release of macOS Sierra (10.12) that was introduced this week at the company's annual developer conference, WWDC.

In 2007, Apple had similar plans for ZFS, a file system designed by Sun Microsystems. Apple included a read-only copy of ZFS in OS X Leopard (10.5) in order to explore options for high-end storage. But Apple was unable to reach a mutually agreeable licensing deal with Sun, and it had abandoned the project by 2009, the year Oracle announced its plan to acquire Sun.

At the time, blogger John Gruber reported Apple had begun work on its own file system. Seven years on, we have an early glimpse of Apple File System, or APFS.

Mundane as this may sound, APFS promises to improve upon Apple's legacy file system, HFS+, which predates the arrival of OS X in 2001. 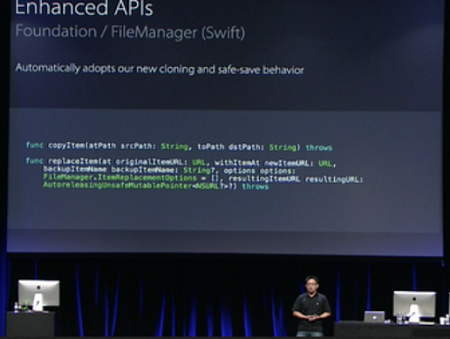 Improved encryption promises better security on Apple devices. Apple's FileVault encryption system is already pretty good, but with APFS, users will have not only the option to activate full-disk encryption (one key per volume) but also the option to employ different keys for each file and for each set of metadata.

Apple has offered full-disk encryption since OS X 10.7 Lion. Since iOS 4, it has encrypted each iOS file with its own key, which offers stronger security than a single per-volume key. APFS will offer a unified approach that is consistent across iOS, OS X, tvOS, and watchOS.

APFS uses "a novel copy-on-write metadata scheme" to ensure that files don't get corrupted if there's a crash while data is being written. It supports sparse files, a storage scheme by which files stored in discontinuous blocks don't have to include the unused space between those blocks.

APFS also rethinks disk partitioning, the process by which a single physical storage device can be divided up into separate volumes, each of which can be mounted as if it were a discrete device. Partitioning can be problematic because it requires storage space to be apportioned when the volumes are formatted, before it's clear how much space will be needed for each. Partitions can be resized but the presence of files may limit potential changes.

APFS holds partitions in a container, making them essentially pointers to actual storage space. As such, APFS partitions can be resized without repartitioning. The approach allows more efficient use of available storage space.

Apple's new file system should make it easier to back up and restore data. APFS supports cloning, a nearly instant process by which files or directories can be copied. Cloned files represent pointers to stored data, and only get written separately when the original files get changed. This is a far more efficient approach than duplicating file data in a second location on whatever storage medium is being used.

Similarly, APFS support Snapshots, which amount to read-only clones. These file system instances can be used to rapidly restore or reimage devices to a specific state.

The changes coming in APFS won't be immediately apparent for most Apple customers. But the end result will be a better user experience, greater reliability, stronger security, and more flexibility to accommodate future innovations.

Thomas Claburn has been writing about business and technology since 1996, for publications such as New Architect, PC Computing, InformationWeek, Salon, Wired, and Ziff Davis Smart Business. Before that, he worked in film and television, having earned a not particularly useful ... View Full Bio
We welcome your comments on this topic on our social media channels, or [contact us directly] with questions about the site.
Comment  |
Email This  |
Print  |
RSS
More Insights
Webcasts
Virtual Event: The State of Cloud Security
5 Steps to Integrate SAST into the DevSecOps Pipeline
More Webcasts
White Papers
Calculating the Cost Savings of Simulation-Based Cybersecurity Training
Fortune 100 Insurer Reaches New Customers with API
More White Papers
Reports
2020 Cybersecurity Outlook Report
Assessing Cybersecurity Risk in Today's Enterprise
More Reports

Although mundane, a computer file system is the product of years of work, usually by a gifted individual (see ReiserFS) who is working within a confined set of ideas. It's not surprising that Apple spent seven years on APFS and it has several notable features to show for it. The containerization of partitioning is a modern stroke, allowing partition size to shift as needs evolve. ReiserSF at one time was included in the Linux kernel. It's ongoing maintenance was impeded by its author's conviction and imprisonment for murdering his wife.
Reply  |  Post Message  |  Messages List  |  Start a Board
Editors' Choice
Hot Topics