Smartwatches have a bright future, thanks in part to excitement about Apple Watch -- but mostly due to upcoming low-cost Android Wear devices, says Gartner study.

According to a new report from research firm Gartner, smartwatches are primed to take off, with Android Wear leading the way. Sort of.

Gartner expects that by 2016, smartwatches will comprise around 40% of wristworn devices. That sounds like a lot, but these "devices" exclude traditional, unconnected watches. More than a billion traditional watches are sold each year, so Gartner's not yet saying Rolex and other high-end watchmakers need to start worrying.

She said the report refers to connected wristworn devices that include not only new entries such as Apple Watch, but also various medical devices, as well as familiar consumer fitness products from companies such as FitBit and Jawbone. She said that within this group, full-blown smartwatches will increasingly become the norm. McIntyre added that despite this growth, conventional watches will likely far outnumber the new devices, at least over the next few years.

To distinguish smartwatches from other wristworn devices, Gartner defined smartwatches as offering convenient communications and apps. Such devices generally have a small screen for the user to discretely receive notifications and messages, McIntyre said. Many of them must also be paired with a compatible smartphone in order to work.

She said products such as runner's watches and fitness bands qualify as wristworn devices but not as smartwatches. She countered, however, that "smartwatches can have the functionality of a fitness band." For example, both Apple Watch and Samsung's Galaxy Gear emphasize fitness, and patents suggest Microsoft could soon join in. Over time, fitness bands that don't include communications capabilities and apps could struggle to compete. 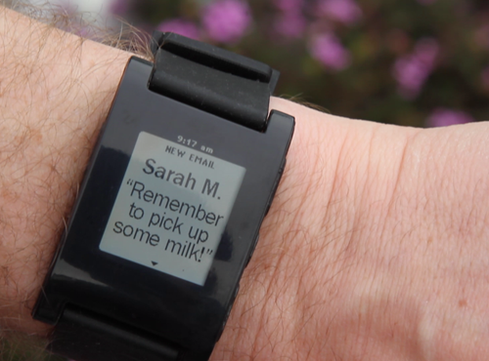 Because they function as status symbols and examples of precise mechanical craftsmanship, the most expensive watches might be somewhat insulated from the digital revolution, but McIntyre said more consumer-oriented mainstream watchmakers will have to embrace software. An executive from Fossil made precisely this point at Intel's recent developers' conference.

Gartner derived its estimate from several factors, including a survey the firm conducted last spring that indicated more U.S. households currently own fitness wristbands than own sports watches. The firm noted that fitness bands enjoy greater adoption even though sports watches have been available for years.

Gartner also noted that device manufacturers and component suppliers are ramping up their investments in wearable products. Including Apple, seven of the top 10 smartphone makers have entered the smartwatch market, up from only two a year ago.

Gartner analysts expect the Apple Watch to "attract many users," but say its high price and dependence on the iPhone will limit its market share. Android has become the most widely-used smartphone OS partly because Android devices are available at a variety of prices, including dirt-cheap

To put it more bluntly, watchmakers will have to embrace utility.
Reply  |  Post Message  |  Messages List  |  Start a Board
InformationWeek Is Getting an Upgrade!

How to Submit a Column to InformationWeek InformationWeek Staff 4/9/2021
White Papers
SANS Institute Survey: The State of Cloud Security
A New Take on Cloud Shared Responsibility
Lessons Learned Investigating the SUNBURST Software Supply Chain Attack
From MFA to Zero Trust
The Five Major Security Pitfalls of WFH and How to Solve Them