50%
Tweet
When Amazon's tablet arrives this fall, consumers will be paying attention.

BYTE brought you the exclusive story on Amazon's plans to deliver this fall a 3G tablet requiring no contracts or WiFi. Analysts told us that a unique tack like that might finally give Apple's iPad some real competition.

Customers seem to agree. According to new study from Retrevo customers say they'd be more likely to consider an Amazon-branded tablet than one from other Apple competitors.

In the study, 55 percent of survey respondents said they'd consider buying an Amazon-manufactured tablet. Samsung and Dell were tied for second place, with a 38 percent positive response, followed by Motorola and HP/Palm with 31 percent, 24 percent for RIM and just 21 percent for Barnes & Noble. 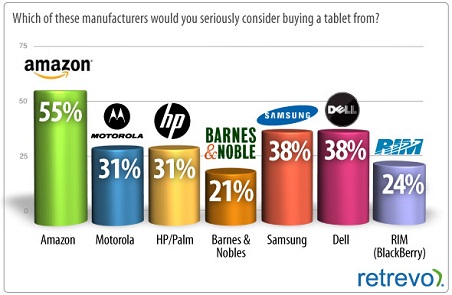 The study's authors concede that it's possible those surveyed confused Amazon's e-reader, the Kindle, with its upcoming but unannounced tablet.

Two other sets of survey data points aren't such good news for Amazon and other iPad rivals. They concern price.

Early guesses put the price point for an Amazon tablet higher than many current offerings, well above the $250 mark. A majority of respondents, 79 percent, said that's what they'd pay for an Android-based competitor to a $499 iPad. Raise the cost to $300 and votes quickly plummeted to 48 percent.

The survey also found that low price is the most important feature for consumers who are considering a new tablet purchase, not format or manufacturer. 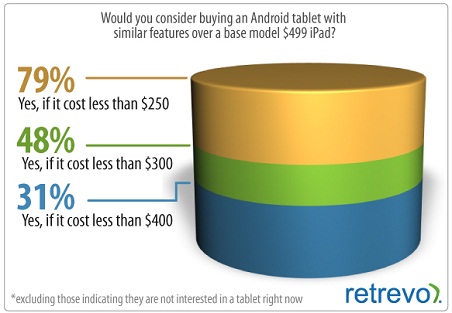 So far this year, a half-dozen big manufacturers have tried and failed to mount a real challenge to Apple. Even for Amazon, with its reportedly "free 3G" Cloud Drive-integrated tablet, it's still going to be a steep hike.

Half of the people that took the survey and plan to buy a tablet in the near future say it will be an iPad.

Eric C. Mack is BYTE's Executive Editor for News. His favorite tablet is equipped with plenty of lined, yellow paper. Follow him @ericcmack or email eric-DOT-mack-AT-BYTE.com.